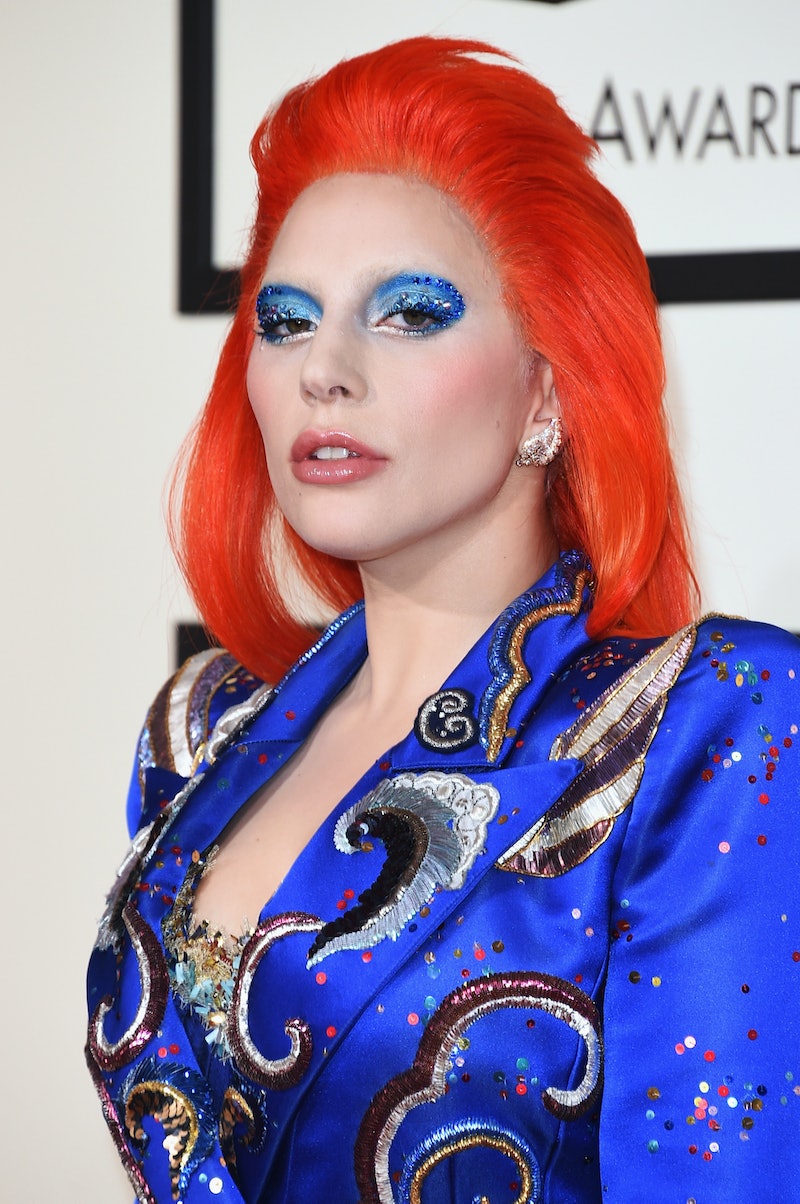 When I found out that Lady Gaga would be tributing the late David Bowie at the 2016 Grammys, I felt pretty moved. Although I've never been the biggest fan of Gaga's music, I've always been a fan of her mentality — one that leads her to championing the outcasts and weirdos of the word in the same way Bowie always did. I knew that Lady Gaga's outfits during her David Bowie tribute would be something special — something that perhaps evoked The Starman's rock glam days or that groundbreaking Aladdin Sane album cover. Maybe even a subtle shout-out to his 1975 Grammys appearance: An elegant tuxedo, bold locks, poignant contouring, and a fedora-like hat to slay.

On the evening of Feb. 15, her new David Bowie tattoo in tow, Gaga delivered more than I could've hoped for, to be honest. With her "little monsters" spirit and obvious adoration for Ziggy Stardust shining through every lyric, the tribute to the man who made all us vagabonds feel a little less alone went down beautifully. Even though tonight is a night to celebrate music — even though so much of Bowie's career was about the music — style was irrevocably interweaved into the man's public persona. Through her performance outfits tonight, Gaga did that fact justice.

From the Aladdin Sane-esque orange hair to the blue eyeshadow to the shimmering custom Marc Jacobs jacket dress that I can just imagine '70s Bowie sporting while belting out "Starman" or '80s Bowie while playing The Goblin King in Labyrinth, this was the perfect intro to the evening.

Gaga began her tribute by belting "Ground Control To Major Tom" with the iconic Aladdin Sane lightning bolt decorating her cheek — her orange locks accenting the bright blue shadow, all the while undoubtedly making Bowie proud.

Ziggy Stardust was undoubtedly known for his jumpsuits — be they bedazzled, neon, psychedelic, or simply glittery. Gaga's white one-piece and feather boa as she went through songs like "Fashion" and "Heroes" was more spot on than anything I could've hoped for.

It can't be easy to tribute someone with the legacy of David Bowie. But I have to say: Gaga captured the man's alien-like spirit. And for that, I'm grateful.

More like this
Tom Cruise Gives His Honest Review Of Lady Gaga’s New Song For 'Top Gun: Maverick'
By Hugh McIntyre
Doja Cat Wore Surrealist-Inspired Schiaparelli To The BBMAs
By Dominique Norman
Machine Gun Kelly Wore A $30K Diamond Mani To The BBMAs
By Paris Giles
How To Master Baby Braids, According To TikTok
By Tomi Otekunrin
Get Even More From Bustle — Sign Up For The Newsletter