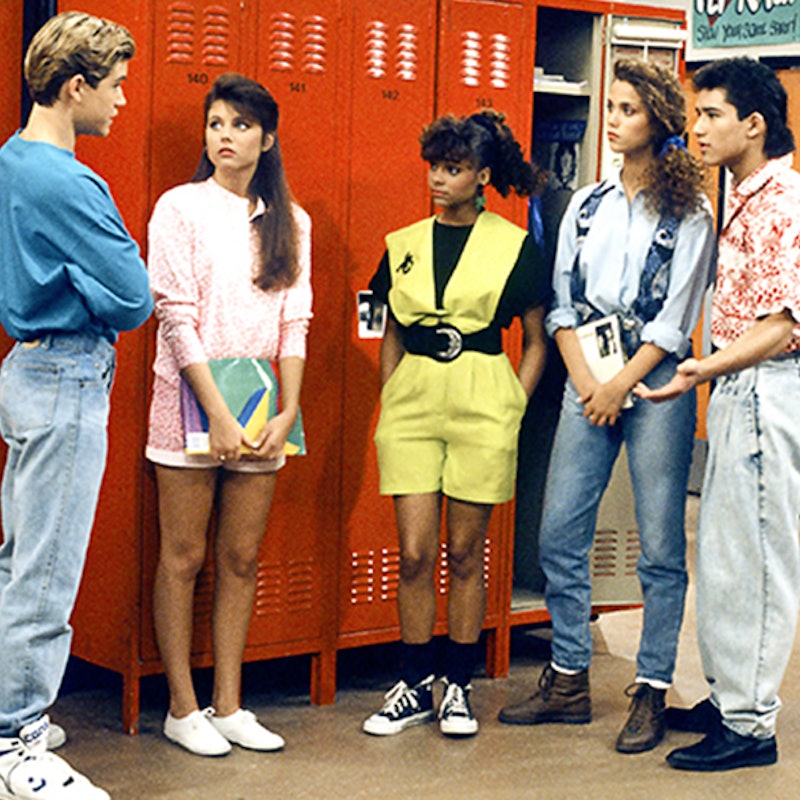 Saved By The Bell is a quintessential early '90s high school television show that millennials will always fondly remember. While it's easy to assume that the fashion and style in the series is outdated today, looking back it turns out to be quite the opposite. In fact, Saved By The Bell predicted lots of current fashion trends way back when it first aired — everything from graphic T-shirts to colored chambray to off the shoulder tops appeared on the show and are now back in style.

The Bayside High School gang were all so relatable to kids growing up in the '90s, and so were their outfits. Zack Morris's boyish style sensibilities could still break hearts today, and truth be told, I would totally still wear the majority of clothing that Kelly Kapowski rocked — yes, even the denim hot pants. The clothes the characters wore back then may have been uber-trendy at the time, but they also reflect quite a few of the biggest trends of today as well. Athleisure, chambray, crazy prints — the '90s revival is in full swing, and the show clearly had a hand in making these 2016 trends happen!

Here are 11 trends Saved By The Bell totally predicted would reemerge in the world of fashion and become trendy once again.

Coordinating sets were all the rage last summer. But where were they seen first? Kelly Kapowski rocked multiple co-ords on screen, but this floral crop top and pants one has got to be my personal favorite. You rock that co-ord like it's 2016, Kelly.

Onsies, rompers, overalls... whatever you want to call them, they have been super fashionable lately. Bayside High School's resident fashionista Lisa Turtle rocked the look back in the day. Her yellow onsie is adorable paired with sneakers and a big belt. Even today, this look would be effortlessly chic (OK, maybe with a few updates).

Lisa may have been the fashionista, but Kelly also had some killer looks too. Her sexy style had her rocking pieces like this off-the-shoulder top, which is super cute but definitely questionable for school. Pieces just like the one Kelly is wearing are flying off the shelves now, because off-the-shoulder tops are having a revival.

It only makes sense that Lisa caught on to the fringe craze way before it blew up several decades after the show first aired. The subtle trim around her jacket (are those shoulder pads?) makes it trendy, yet totally still wearable today. I could see a blogger rocking this to Fashion Week right now.

Ahh, crop tops. Sure, they were popular in the '90s, but they definitely died out for a bit — until recently. A graphic, turtleneck version like the one Kelly is wearing is totally a covetable look.

Jessie, Slater, and Kelly all had an effortless way of pairing workout clothes with their regular clothes. Sound a little familiar? Yup, that's athleisure for you. Some of your favorite TV characters were doing it even before all your favorite celebs.

Jessie may have been the brains at Bayside High School, but the girl also had some flawless style. Her chambray and printed blouse is beyond amazing. The light denim color with the fabric details is so retro cool, even for today. If only wearing a headband like that was still in style...

The oversized look is definitely a '90s trend that came back strong. It's common to see fashion editors, models, and bloggers rocking the oversized button-downs and sweaters. During The Saved By The Bell era, Kelly was already wearing the look with high waisted jeans and cropped tops.

Don't tell me you wouldn't love to rock Jessie's graphic T-shirt tucked into a pair of high-waisted jeans with an awesome bomber jacket. There's no denying that her T-shirt would stand the test of time!

So maybe Screech's style was a little overbearing on the series, but there's no doubt his pattern mixing efforts were valiant. Being able to rock a printed blouse with differently printed pants is the mark of a true style champion, so let's just applaud Screech for trying. After all, it's about the effort!

You probably said your goodbyes to hip-hugger minis and welcomed high waisted skirts in 2015. Just in case you were wondering who did it first, look no further than Kelly Kapowski. Her chic outfit with a striped top and a high waisted black skirt is undoubtedly something we'd see in the pages of a fashion magazine today.

Saved By The Bell's wardrobe may not seem like much, but it has certainly proved to endure. So if you're looking for style inspiration, don't be afraid to click play on Saved By The Bell. You never know what other trends you may find lurking around the corners of Bayside High!