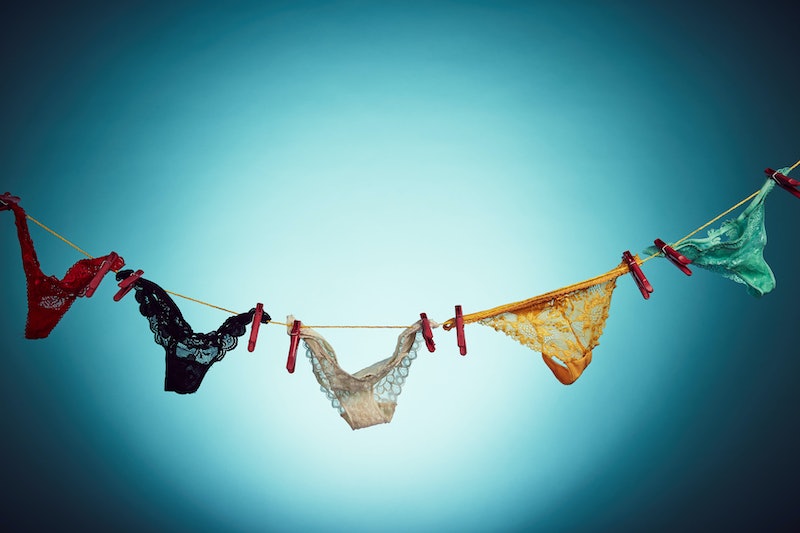 A hole in the left butt cheek. An indescribable, gag-worthy smell. A weird and slightly offensive saying on the back end in an obnoxious, all-caps font. If you ask me, these are all signs you're keeping your underwear too long. And a purge of these horrendous panties is probably long overdue.

I admit that it's easy to loose track of what's going on in your panty drawer. You pick out underwear in the morning, put it on, and don't think twice about it. But it's the monotony of the process that likely has us overlooking exactly what is going on in there. Look more closely, and I bet you'll be horrified by what you find. From smells on briefs that you can't describe to panties you don't even remember buying, there are underwear that have probably been lingering in your sartorial life for way too long, and need to be thrown out. Like, yesterday.

So get ready to sort through your underwear drawer and exterminate, eliminate, and eradicate any pair that is guilty of one or more of the following characteristics. Trust me when I say that the last place these guys belong is in your life. The first place is the trash.

1. You Don't Remember Buying Them

Oh, those are the panties I got at, um, that place. Yeah, you don't remember where you got them, do you? There's a reason you forgot about them, so why not just get rid of them now?

2. They Have A Hole In Them

No matter how special or memorable a piece of clothing might be, it should probably be thrown away if it has an irreversible hole in it. That's also true of your favorite panties, even if they do make your butt look great.

There's probably no need for me to elaborate on this one. If there's a no-good smell reeking from your panties, it's time for them to go.

4. They Have Unwashable Stains

If your undies have the kind of stain on them that not even detergent, stain-remover, or bleach combined could get rid of, it's likely time to toss them.

Holding onto underwear that's way too stretched out is probably the biggest disservice someone could do for themselves. They don't fit, they look horrible, and they're probably older than you can remember. Just toss 'em!

Seriously, underwear that cut off your circulation are not cool. Your panties should be comfortable and give you the support and foundation needed for the rest of your clothes — not make you question whether you're going to make it through the day.

If you have a few undies that just don't do what they need to do, it's time to part ways. Especially if they're ripped up and gross, and you wouldn't want to wear them anyway.

8. They Used To Be White

There's no denying that a pair of white panties can be an undergarment staple, but if they're so old and worn that their color reminds you more of a coffee stain, they've probably passed their prime.

9. They Give You Major Wedgies

Unless you only wear thongs.

10. They Have A Weird Graphic On The Butt

Personally, I'm guilty of this. There was a time in high school when I purchased way too many undies with horribly pun-y things written on the butt. This may have been cool to me then, but it definitely isn't now.

But now they're just covered in holes, smell bad, and would probably make a better rag than undergarment. I don't know about you, but that doesn't sound very sexy to me.

There's no need to hold onto those decade-old panties you only wore during your period. There are so many better options out there now, like underwear specifically designed for that time of the month.

Panty lines are a struggle, and keeping underwear that doesn't help that struggle is only going to hold you back. These stressors have long deserved a good toss, so go ahead and get them out of your life.

14. The Elastic Is Shredded

Ahh, the classic, shredded, elastic band underpants. They're kind of endearing because they prove how much you love them and wear them. But they're also probably going to fall apart at any minute. Avoid an undie mishap and throw 'em out.

15. They're As Stiff As Cardboard

Whether they were innocently stuffed into the wrong load of laundry or they're just made of the most uncomfortable fabric known to human bottoms, cardboard-esque panties are not worth holding onto.

16. You'd Never Admit To Owning Them

"Those? Nope, those aren't mine. I would never wear those." Yeah? OK. I totally believe you.

17. You Never Wear Them Anyway

If you never wear them, why are you keeping them? Free up some space in your drawer and in your life.

So those are all the signs that you've kept your underwear way too long. It's OK, we all do it. But if there's a funky smell in your bedroom that's coming from your knicker drawer, just know that it's not going to go anywhere until you clean some things out.

More like this
Kendall Jenner Just Paired A Cozy Sweater With Underwear & Sheer Tights
By Allie Fasanella
12 New Year's Nail Ideas That Are Truly Stunning
By Jordan Murray
Here Are All 703 Outfits Rachel Wore On Friends
By Kat George
Cyber Monday Deals 2022: The Best Fashion Sales To Shop
By Dominique Norman
Get Even More From Bustle — Sign Up For The Newsletter