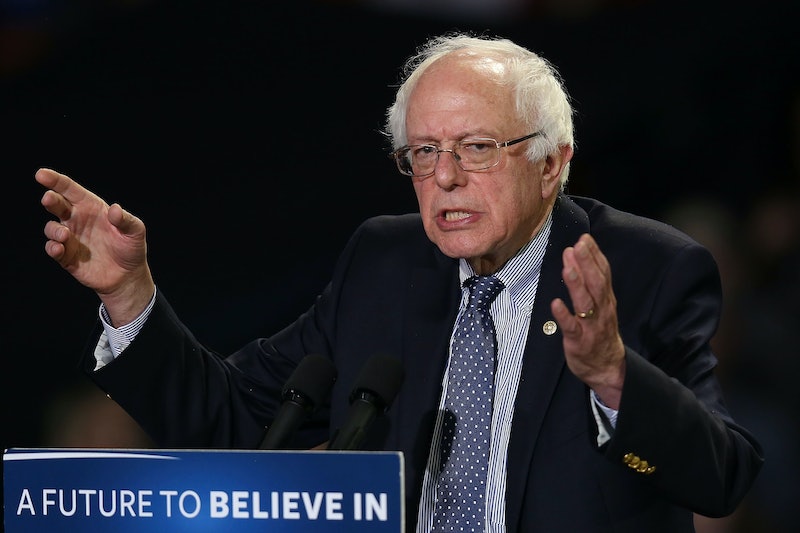 An unbelievably overused phrase when it comes to elections is that it's always a tight race, but most especially when it's referring to the current Presidential primaries. Well, the race is about to get a lot more interesting with these Donald Trump and Bernie Sanders hair socks that I didn't even know existed until today. The company AlwaysFits.com is throwing its hat — socks, rather — into the ring of hilarious 2016 campaign merchandise with these limited edition pairs featuring two of the most talked about candidates of this election year.

The Trump and Sanders socks feature fuzzy hair that are similar to each candidate's unique style (they even got the Don's perpetually windswept locks right). Each pair is available for purchase now, but will not be shipped until late March. So, if you were hoping to show your love for either gentleman on Super Tuesday, you're out of luck. But, there's still plenty of other opportunities in this election season to sport these fuzzy footwear.

In the weird yet lucrative world of novelty merchandising, using the likeness of political figures to sell everything from clothing, to toys, and housewares isn't new. The top candidates from every party has a fair share of merch out there, from Bernie Sanders slogan t-shirts, to Hillary Clinton phone cases, and yes, even a Donald Trump sex toy. Even future presidential candidate Kanye West already has swag for his 2020 campaign. But, let's cross that Yeezy bridge when we get there and instead marvel at the sight of the Sanders hair sock:

If you're not feeling the Bern, here's the Trump version:

Perfect for those times when you want to put your foot in your mouth, right? But these hair socks are not alone in the campaign merch universe. Check out these other swag featuring the 2016 candidates:

It's like a cousin of the popular Lil' Bernie doll line.

I wonder why there isn't a Hillary hair sock available, but this will do.

Just don't let him talk your ear off.

I Was Bern This Way Mug

You're on the right track, baby.

More like this
For These Abortion Clinic Volunteers, Going TikTok Viral Is A Risk Worth Taking
By Audra Heinrichs
Sparks Fly Fast & Furious In 'Honey & Spice'
By Bolu Babalola
Mrs. Wheeler Wore A Vagina Necklace In 'Stranger Things' Season 4
By Allie Fasanella
10 Fashion Trends You're About To See Everywhere & 10 That Make You Look Outdated
By Nicole Zane
Get Even More From Bustle — Sign Up For The Newsletter