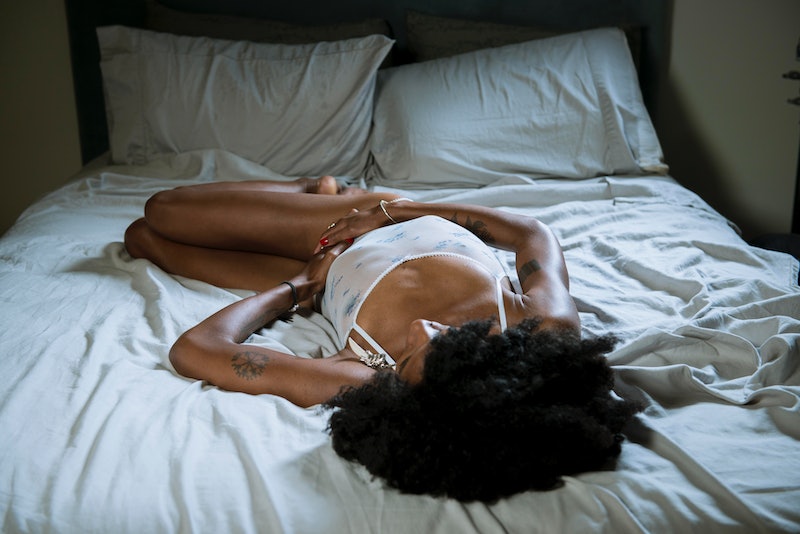 Sometimes in life, it can be tricky to know if the things you're doing are totally weird or downright normal. So you might be pleased to discover that your weird underwear habits are likely things everyone else does, too. Even though it's great to stand out and do your own thing when it comes to fashion and all things, really, there are times when you just want reassurance that the thing you're doing is being done by others, too. Call it grounding.

When it comes to discussing a subject like underwear, it can be difficult to know where and when to bring up "normal" underwear habits with your friends. Because of the social stigma surrounding nudity and anything related to nudity, you might not feel comfortable discussing the topic with anyone other than your BFF or closest family members, and even then it's possible you'll still feel a little embarrassed. But there's no shame in talking about what's underneath your clothes. IMO, it's the only way to stop feeling like your routines and habits are somehow peculiar or inappropriate.

So to put your mind at rest, here are a bunch of underwear-related habits you might be performing that are all totally normal. I've definitely done all of these.

I challenge any human to tell me honestly that they have never picked up a pair of panties or a bra off the floor and smelled it. We've all likely done it at least once in our lives. Heck, I've done it too many times to count. Let's just hold our hands up and admit that this is a totally normal practice. How else are we supposed to check if our underwear is clean or dirty?

2. Taking Your Bra Off As Soon As You Get Home

The glorious feeling of taking off your bra after a long day is just the best. And I would put money on the fact that many people breathe a delicious sigh of relief when removing their bras as soon as they get home. Once you've stepped over that threshold, it's just you and the ladies.

3. Relieving Yourself Of A Wedgie In Public

Whenever there is material atop a butt crack, it's bound to get caught up in there. This is normal. It is also normal to pretend that you're rearranging your skirt or looking like you're moving into a more comfortable sitting position, when in fact you are removing a wedgie. Wedgies will happen, so don't be uncomfortable. Just get in there and pull them out.

4. Wearing Underwear You Found On The Floor

There will be mornings when you wake up late, your room will look like a tornado swept through it, and you won't find any clean underwear. It's totally OK to find the nearest panty or boxer, throw it on, and make it to work on time. Unless your panties have been the victim of an unexpected period, it's probably not going to harm you to wear your knickers two days running. Plus, who the hell is going to be inspecting your underwear anyway? There is no Panty Police.

Whether you borrow your boyfriend's underwear or you just buy "men's" boxers from the store because you like the feel, wearing men's underwear should not be frowned upon. The gender binary is slowly being broken down, but it's not quite demolished. You might feel a little unsure about whether wearing men's underwear is "normal." But my response is: Why suffer a butt-crack swallowing G-string when you just love the bliss of wearing a pair of guy's underpants?

6. Letting Your BFF Borrow Your Underwear

You share most things, so what's wrong with sharing your underwear? Of course, I'm talking clean undies here. You probably don't want to switch genital germs or body sweat. But if your BFF stays over at your place and she forgot to bring a pair of undies for the next day, there's no harm in lending her a pair of your panties. Don't sweat the small stuff.

Going commando or not wearing a bra is heavenly. You might just feel totally free from the constraints of underwire, elastic, and lace and you'll hopefully be able to move around without worrying about your bra strap falling down, or showing your panties.

My advice? There's no need to worry about your underwear habits. Chances are most people are doing these "weird" things as well.

Want more underwear fun? Check out the video below, and be sure to subscribe to Bustle's YouTube page for more hacks and tricks!