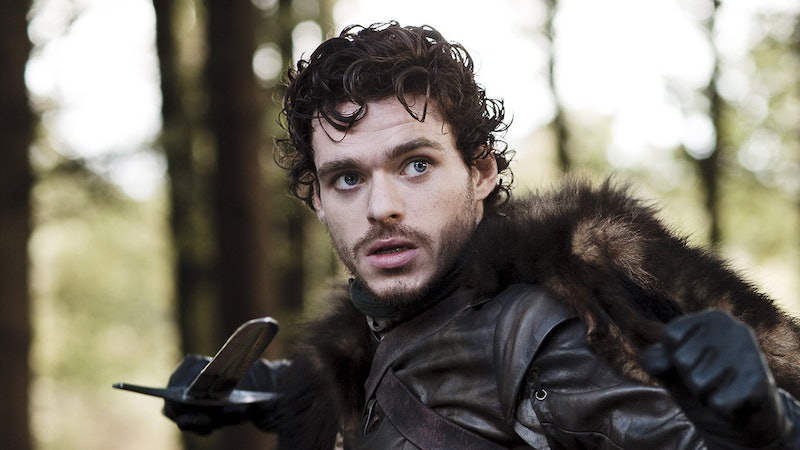 Watching Game of Thrones can take an extreme toll on one's emotions. Not only does it take SAT-level concentration to remember of all the characters and their crisscrossing plotlines, but watching characters you love be killed on a regular basis is heart-wrenching. And, to be honest, I think Game of Thrones totally owes us fans a solid — especially after the Red Wedding. That's why I think these 13 characters should come back from the dead on Game of Thrones .

Last season, Jon Snow was likely killed in an uber-violent fight — but all indications point to his eventual survival and/or resurrection. This got me thinking: If Jon Snow can be saved, why not some of my other favorite characters? I mean, and it's not like Game of Thrones has to stick to real-world laws of nature. If a woman can ride around on a flying dragon while ice zombies roam the countryside there is no reason why a few of my favorite characters can't make a miraculous comeback. It just seems unfair that Jon Snow gets to be saved while so many (and I mean so many) are dead and buried. This is an injustice I say. Bring our people back, Game of Thrones!

Here are the characters that I think should make like Beric Dondarrion and rise from the dead to return to my television screen:

Shireen never should have died, ergo, she should be first in line to come back to life — it's as simple as that.

So, while Ygritte and Jon Snow are probably dating IRL, on Game of Thrones, Jon Snow seems to really be struggling without Ygritte. So, throw the man a bone and bring his lady love back from the dead.

While he's dead as a doornail on Game of Thrones, Stannis Baratheon is still very much alive in the books. So, I would love to see Stannis resurrected so I can see him get killed again — I'm not a big fan.

An oldie but a goodie. nothing would make me happier than to see Papa Stark return from the dead to avenge his family. Also, the dude totally died without explaining who Jon Snow's mother is and possibly confirming the R+L=J theory — talk about leaving some unfinished business.

While Jon Snow remains my favorite Stark child, Robb's resurrection could strengthen the Starks' numbers as they battle for the Iron Throne — and for that reason, I am team "Bring Robb Stark Back."

The Hound was an OK dude who did some really bad things. While protecting Aria prompted his path to redemption, I want more! And even more so, I want a final showdown between The Hound and his mountain-ish brother.

The Mountain needs to come alive for the epic Hound vs. Mountain showdown. That is literally the only reason to resurrect this character.

This pick is purely for selfish reasons. Remember Jory, head of the Stark family's guard? Yeah, I've still got a major crush on the dude. Long live Jory!

First come marriage, then comes love, then comes a painful and violent death. Or, that's the way things happen on Game of Thrones. Drogo and Daenerys were my favorite GoT couple, so I am still holding out hope that the sun and moon will be reunited sometime soon.

Just imagine a zombie Oberyn and the Sand Snakes kicking butt and reaping revenge across all of Westeros. I would pay good money to watch that show. Hear that HBO? I will give you money if you make this show!

Daenerys Targaryen, like a lot of characters on Game of Thrones, has had a tough go of it in the love department — as in, all of her lovers have ended up dead. The good news was that Hizdahr's death proved his loyalty to Daenerys, but bad news... yeah then he was dead. Maybe a resurrection could give these two a second chance at love?

Fingers crossed that no more of my favorite characters die this season and I have even greater hopes some old friends will reappear in Westeros.