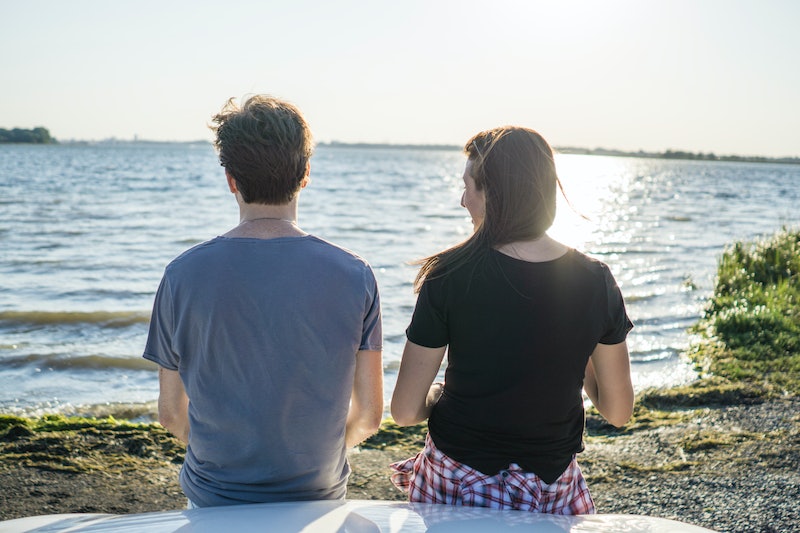 Have you ever noticed that sometimes, the people who claim to support you turn out to be your harshest critics? Concern trolling can come from all sorts of unlikely places: Parents, friends, and as always, random strangers on the Internet. Unfortunately, it's often couched in so many justifications and declarations of concern that it's easy to miss things like the signs that you're being concern trolled by your date. Most women are on red alert for the first few dates, keeping an eye out for overt flaws like slut-shaming, sexism, or refusing to share their guacamole, but the insidious thing about concern trolling is that it's hidden behind a facade of concern. As a result, it's often dismissed as looking out for someone — if we even recognize that it's happening in the first place.

Loosely defined as anyone who uses "concerns" to justify shaming or unwanted criticism, the term "concern troll" has been around in some form since the mid-2000s, although it certainly existed before then. They pop up in all sorts of situations, but one of the most common examples can be found any time a plus-size lady unapologetically celebrates her appearance. Out of the woodwork, the trolls appear to warn her that she's unhealthy, in desperate need of a gym membership, and probably has diabetes — but they're only telling her these things because they're "worried about her health."

Needless to say, it's some pretty blatant fat shaming, yet concern trolls often fly under the radar. Unfortunately, they're more common than you'd think, so let's take a look at five signs of concern trolling to watch out for on a date.

1. They Question What You Order

If you feel like ordering a burger and milkshake, that's your business, and if your date suggests you order something healthier, feel free to let them know exactly that. The same goes for thin shaming; if your date says you're too thin and tries to convince you to order more food, you are fully within your rights to break out your best side eye.

That being said, maybe don't order anything with garlic or onions if you're planning on smooching them later. That's just mean.

2. They Raise Their Eyebrows At Your Outfit

It's a classic example of slut shaming by way of concern trolling: The guy who offers you his coat or woman who tells you to change outfits because what you're wearing is "too revealing." Not that they're judging you for your skirt length — they're just letting you know that other people will.

3. They Judge You For Sleeping Together On The First Date

It's hella illogical, but getting judged for sleeping together on the first date is more common than you'd think, especially in heterosexual relationships. Traditionally, men are supposed make the first move while women rebuff their advances, and if you deviate from the script, they may end up labeling you "easy." If they're especially manipulative, they use concern trolling to hide their sexism.

4. They Tell You To Focus On More Important Topics

As Geek Feminism notes, concern trolls often claim to acknowledge the importance of a subject like the wage gap, but they insist that there are more important things to focus on, like campus rape or domestic violence. They're paying lip service to an important issue, but they turn around and downplay its significance in the next breath. Not exactly supportive, is it?

5. They're "Concerned" About Your Career Decisions

A concern troll isn't always slut- or fat-shaming; people who question your career decisions out of the guise of "concern" are absolutely trolls as well. "You're working how many hours a week? Isn't that going to affect your family life?" they ask, as if your long-term plans for having kids are their business already. Women get enough people policing their behavior in every other aspect of their lives — is it really necessary to bring it up on a first date too?

Of course, it should be noted that not everyone realizes they're concern trolling, so it's probably not a good idea to go in with guns blazing when you see it in action. Rather, treat it as an opportunity to talk. If they're worth keeping around, they'll stop as soon as they realize it's bothering you.

More like this
Are Gemini & Leo Compatible In A Relationship?
By Kristine Fellizar
Melony & Gia Prove That Couples Who Grow Together, Stay Together
By Jessica Morgan
5 Ways To Stand In Solidarity With Women In America From The UK
By Sophie McEvoy
How To Fight For Reproductive Rights, Based On How Much Time You Have
By Courtney Young
Get Even More From Bustle — Sign Up For The Newsletter