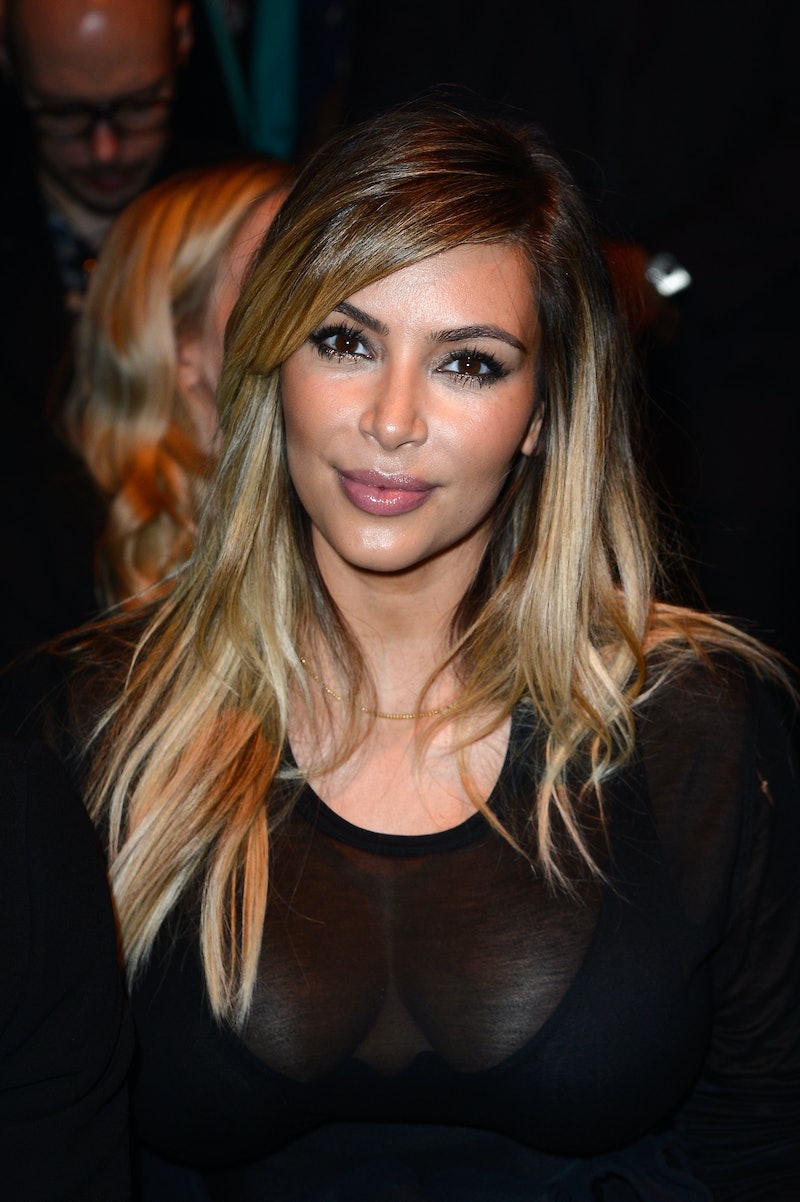 After months of effort, a wardrobe of (somewhat) better style choices, and a whole lot of begging, pleading, whining, and demanding from hubby-to-be Kanye West, reality TV queen Kim Kardashian finally landed her long-awaited photo shoot with fashion bible Vogue . That is, until she didn’t. Despite rumors swirling on Sunday that Kardashian was actually being shot that very moment for the major fashion mag, another source came out on Monday to outright deny the claims. Ouch. For Kardashian, her fans, and "fashion victim" West, that really has to sting.

As crazy as it sounds, Kardashian's notable style evolution since shacking up with West may have put some credibility into the rumors of Kardashians' potential appearance in the pages of Vogue. After all, Kardashian has cleaned up her act for the most part over the last year and — if not always flawlessly, then at least with good intentions — has moved away from trashy-sexy ensembles in favor of more polished dresses, respectable silk jumpsuits, and surprisingly chic crop-top-and-skirt combos. And even more shockingly, that blonde hair she sported (which has, for the time being, sadly gone away), upped her beauty game tenfold.

The reality star has also been buddying up with a slew of high-end designers, making front-row appearances at runway shows, and cozying up to Anna Wintour herself (that is, if you call sitting a few seats away from her at a Kanye concert or attending a dinner at Wintour's house cozying up).

But let’s be honest: The number of Kardashian’s past style transgressions and ridiculous publicity stunts could fill an entire encyclopedia, and there’s little chance that one of — if not the — most credible fashion magazines in the entire world would deign to feature the controversial celeb in its pages. I mean, we’re talking about a woman who was married for 72 days and whose definition of “personal style” used to mean wearing bandage dress after bandage dress. (And even more recently while pregnant with baby North West, there were a few outfit choices — think peplum pants and a suffocating floral number — that just can't be forgiven or forgotten).

Plus, when, if ever, have you seen a reality TV star on the cover of Vogue? It was somewhat surprising that Girls’ star Lena Dunham even made it to the cover, and she’s at least relevant in the world of pop culture (though, regrettably, not fashion). And let’s be serious: If Kerry Washington — the queen of White House–worthy TV dramas and risk-taking maternity style — hasn’t graced the cover of Vogue, it would be certifiably insane to think the Keeping Up With the Kardashians star deserves a prized spot on the illustrious magazine’s cover.

So despite Kardashian and West's best efforts — which include, but are not limited to, drumming up a lot of attention around their upcoming Parisian wedding this summer — it looks like the duo needs to put some extra thought into figuring out a way to weasel Kardashian into Vogue. That, or just wait until the day notoriously picky Wintour leaves the fashion mag at last.

More like this
Kim K Is Putting Kanye’s Memorabilia — Like Grammys & Clothes — In A Vault
By Jake Viswanath
Kanye Allegedly Showed Explicit Photos & Videos Of Kim K To Yeezy Employees
By Radhika Menon
Julia Fox Says She Dated Kanye To “Distract Him” So He’d Leave Kim K Alone
By Jake Viswanath
Kim Kardashian On The Beauty Hack That “Changed My Life, My Skin, My Confidence”
By Taylor Jean Stephan
Get Even More From Bustle — Sign Up For The Newsletter