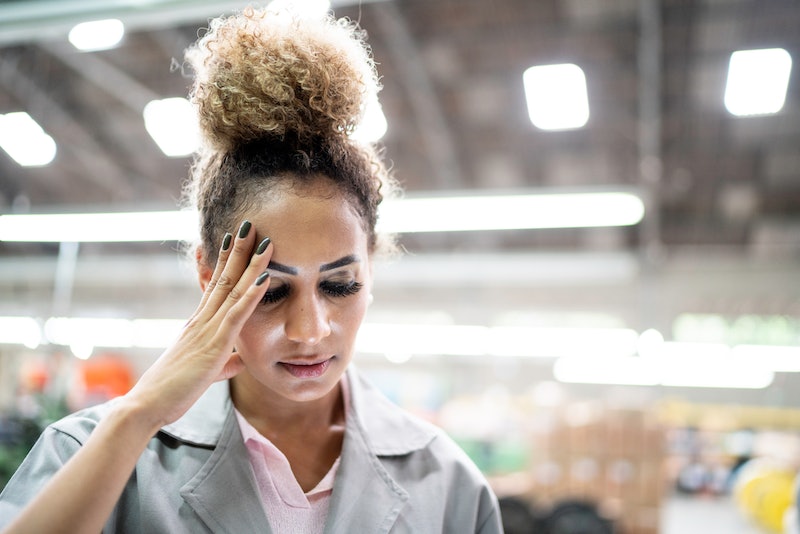 Self-esteem can be a fragile thing — a rude comment, a photo online, a weird sideways glance from a coworker, and it all shatters to a million pieces. Well, sometimes not that easily. But maintaining a healthy level of self-esteem can be pretty difficult.

That's because there are so many societal pressures out there just begging to ruin our mood. Take commercials, for example. They go right for our deepest insecurities, and make it feel like we can't have a great life until we buy X, Y, or Z.

Self-esteem is also affected by the people in the advertisements, or at least the Photoshopped versions of those people. Remember the classic Dove commercial showing how beauty is distorted in the media? In the ad, a pretty — but normal — girl is poked and prodded and turned into quite the inhuman version of herself (AKA, a stereotypically beautiful model). It just goes to show the impossible standards we are bombarded with day in and day out.

And yet, we're all aware by now that this is the case. I know I do my best to not judge myself against billboards and magazine covers, or to fall victim to tempting advertisements. But what else can affect the way we view ourselves? Here are some sneaky causes of low self-esteem, and what you can do about them.

1. Too Much Negative Self-Talk

Self-talk is sort of like your internal monologue. You know, the little voice that narrates your day, makes accusations, and has opinions about everything? It's super annoying, and usually not very nice. In fact, it can be downright negative.

As Ben Martin, Psy.D., noted on PsychCentral.com, "Self-talk is often skewed towards the negative, and sometimes it’s just plain wrong." This is the case when you hear it say "I can't do it" or "I'm so ugly," and it can get even meaner if you're experiencing depression.

To shut the voice up once and for all, start calling what it says into question. "Once you start looking at it, you’ll probably be surprised by how much of your thinking is inaccurate, exaggerated, or focused on the negatives of the situation," Martin said.

If you've been the target of abuse or assault, then you know how hard it can be to feel good about yourself. Because when something bad like this happens, an onslaught of guilt and blame and grief is often not far behind.

Which is totally normal, by the way. As Suzanne Lachmann, Psy.D., noted on Psychology Today, "Being forced into a physical and emotional position against your will can make it very hard to like the world, trust yourself or trust others, which profoundly impacts self-esteem. It may even feel like your fault when it couldn't be less your fault."

Of course it's way easier said than done, but try not to let the stupid actions of others get stuck in your head. And if need be, talk to a counselor.

3. Unfairly Comparing Yourself To Others

If you want to take the wind out of your sails, go ahead and compare yourself to everyone else. According to Jane Bolton, Psy.D., M.F.T., on Psychology Today, "The activity of comparing one's self with others is a major trigger for a plummet in self esteem, a shame reaction. Shame fills the gap between what — ideally — we would like to be, do and have, and what we see ourselves as actually being, doing, and having. The bigger the gap, the greater the pain."

It can feel like everyone else on the planet is prettier, smarter, and more successful. But the problem with this way of thinking, Bolton said, is that our ideas are often distorted, and we become blind to what is awesome and valuable about ourselves. So it's important to stop with the unfair comparisons. Start focusing on what makes you so great, and let that color your thinking instead.

You can be grown and on your own, and yet still affected by the words of your parents. That's because growing up in a toxic family can have quite the lasting effect. The negative words from your mom can impact how you view yourself for decades. And the mean things your dad said? Well, good luck forgetting them.

But it is possible to move on, or at least work on healing the issues. As Takeallah Russell and Erin McKelle noted on EverydayFeminism.com, "Much of the residual pain and anger we feel comes from the fact that we know we deserve to be treated with love and respect, and if we don’t get what we believe we should, we’re socialized to blame ourselves — as if we are somehow responsible for our parents’ behavior. But, in order to move towards healing, we have to accept that we can’t change other people’s truths, perceptions, or consequent behaviors ... We can, however, attempt to encourage them to treat us, and themselves, better."

Social media is fun, and obviously a major part of all our lives. And yet, you can be the most self-assured person ever, and still find it hard to avoid pangs of jealousy when a friend's vacation photos start popping up. That's because everyone curates their online lives with the utmost care, so they look wildly successful, and beautiful, and fun.

If you don't take care to remind yourself that social media can get out of hand, then it can do a number on your self-esteem. But you know what? Their lives don't affect you. Let other people be wildly successful, and beautiful, and fun. Because you get to be all those things, too.

6. A Lack Of Assertiveness

Ever get that awful sinking feeling when you don't stand up for yourself? Yea, that's because assertiveness is closely connected to self-esteem. So any time you let someone walk all over your, insult you, or generally disrespect you, expect your confidence to take a slide.

To prevent this, you're going to want to start sticking up for yourself. And luckily doing so isn't too too hard. According to an article on the blog EsteemedSelf.com, "To practice self-assertiveness is to live authentically, to speak and act from your innermost convictions and feelings ... Self-assertiveness does not mean belligerence or inappropriate aggressiveness ... It simply means the willingness to stand up for myself, to be who I am openly and to treat myself with respect in all human encounters."

OK, so maybe that can be tricky, but work on it one interaction at a time, and I promise it will become easier.

That's because self-esteem is ultimately in your hands. Sure, your parents were egotistical, and you've been through some pretty bad stuff in life. But, with a little work, it's possible to convince yourself that you're worthy of feeling better.