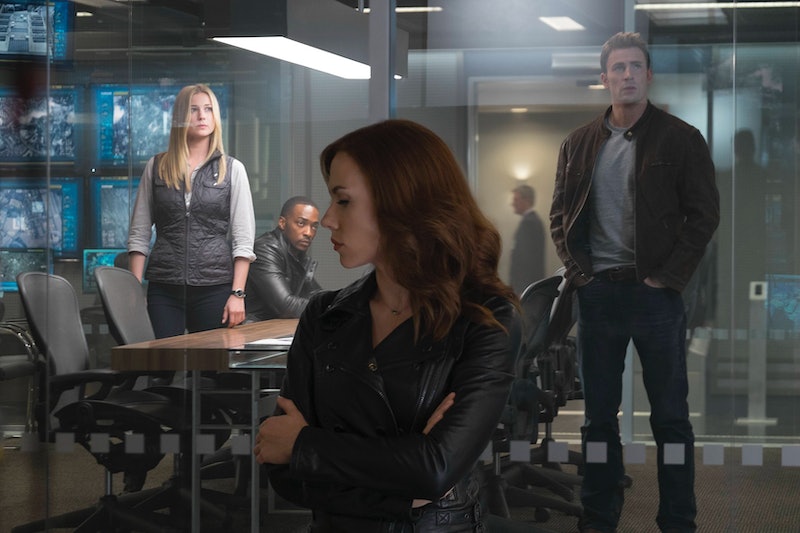 Obviously, we all know that the upcoming superhero smash-up Captain America: Civil War has source material rooted in a rich history of 77 years of Marvel Comics. More specifically, it's based directly on the popular "Civil War" crossover storyline that ran from July of 2006 through January of 2007 and featured some of the most popular heroes in history going toe-to-toe over the divisive Superhero Registration Act. But little did you know that the next film in the Marvel Cinematic Universe — or at least one specific character's arc within that film — is also partially inspired by one of the most beloved television series of our time: Breaking Bad. What do meth cook Walter White and international assassin Black Widow have in common? I'll let Joe Russo explain.

In an interview with Cinema Blend, the Winter Soldier and Civil War co-directed had this to say about his inspiration for Scarlett Johansson's character in the upcoming film:

We made some strong choices with Natasha [Romanoff] in this movie, and it’s a tricky arc that she has to play in the film. It’s something that, you know, you always want to surprise people. You don’t want to make choices that are easy. I always said, what I loved about Breaking Bad is Vince Gilligan always wrote himself into the hardest corner. I’d watch an episode, and go I have no f*cking idea how he’s going to solve this next week, and he would solve it. That’s compelling narrative. That’s compelling storytelling, to me. We made a similar choice with her in this film … but it’s tricky because you have to monitor constantly throughout the filmmaking making sure you’re getting the subtleties of the arc and what she’s doing.

So what impossible situation is Natasha going to find herself in during Civil War that she'll have to solve her way out of? Despite the fact that we know she and Cap are good friends, having worked together closely during the events of The Winter Soldier, we also know from the Civil War trailers and promos that she somehow ends up on Tony Stark's side, at odds with her erstwhile ally.

"She is conflicted," Johansson herself recently told Buzzfeed during a Tumblr Q&A session. "This is her worst nightmare. She sees the value to both sides. Her relationship with Cap is very deep and is a continuation of their story from Winter Soldier. But, due to very personal reasons, they wind up on opposite sides." That's a pretty drastic change in circumstances considering that last summer's Avengers: Age Of Ultron ended with Black Widow and Captain America preparing to train the new Avengers recruits side-by-side.

But the newest Civil War trailer that dropped on Thursday hints that things might not be as cut-and-dry as #TeamCap vs. #TeamIronMan. Although they are purportedly on the same side, one intriguing scene in the trailer features Natasha telling Tony, "I'm not the one that needs to watch their back" before striding off angrily. Have we just gotten a glimpse of Natasha's defection to Steve Roger's camp?

A key element of the "Civil War" comics storyline involves Spider-Man and which team he'll choose to give his allegiance to. Although he starts on #TeamIronMan, he eventually switches to #TeamCap when he learns that Stark was planning to lock up anyone who opposed him in a high-tech prison indefinitely. Obviously, the newest big screen version of Peter Parker is making his debut in Civil War, but since he's so new to the franchise, would his betrayal really carry the same emotional heft? Wouldn't it be more meaningful if someone like Black Widow ended up stabbing Tony in the back?

Whatever ends up happening with Natasha, it's nice to hear that she'll be getting a lot of focus in Civil War. So far, all of the trailer and posters and other promotional material have centered squarely on the clash between Cap and Iron Man, so it was unclear how much focus anyone else would be getting in this super-sized sequel. But with Marvel Studios' longest movie yet, it sounds like plenty of time has been made for Black Widow… which is nice to hear, given that the studio still refuses to give Johansson her own solo movie.

I suppose we should be thankful that, even in the absence of her own spinoff, Black Widow remains one of the most integral figures in the Marvel Cinematic Universe. Other than Nick Fury, she's probably the supporting character (aka all the characters who don't have their own franchises) that has appeared in the most MCU movies. And now it sounds like her prominence will continue with Civil War.

We'll find out whose side Natasha is really on when Civil War premieres this May. In the meantime, you can probably get ready to read a lot of forthcoming Black Widow/Walter White fan fiction. Yay?