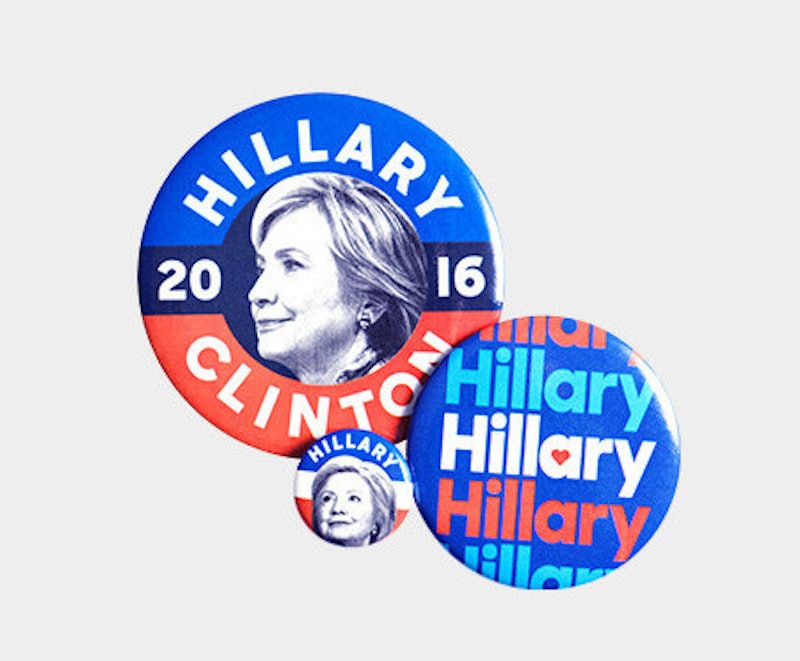 It's been a crazy campaign season to say the least, and I've taken a brief respite from all the fiery rhetoric to get really into retro campaign gear. There's something so classically American about good, old-fashion political swag, and no item is more iconic than the humble campaign button.

Campaign buttons and pins are some of those election artifacts that seem to be as old as American elections themselves. "I like Ike" pins from the 1950s have become nothing short of iconic. And they're the kind of object that can be passed on from generation to generation. Just the other day, I found an old button from the Nixon campaign that apparently belonged to my dad. Needless to say, my dad and I agree on a lot of things, but politics is not one of them. However, we manage to harmoniously co-exist and happily cancel each others' votes out.

But this is 2016, not 1952, and there have been major upgrades in pin technology. Joining classic round campaign buttons are also some adorable enamel pins for people of every political inclination. So if you're a Democrat, or at least of the liberal persuasion, and want to let the world know where you stand this election season, here are 11 pins for you.

If you're feeling the Bern this election season, pick up this enamel pin with the Vermont senator's face on it.

If you're more of a Hillary fan, don't worry. There's also an enamel pin for you, featuring the face of the former First Lady and Secretary Of State.

Sure, there are lots of Bernie Bros out there, but what if you're a Bernie Bae? (Yes, it's a real thing. Yes, there's even a music video for the Bernie Baes.) It's easy to let everyone know that Bernie's your bae with this enamel lapel pin, no choreography required.

Between her cameo on Broad City and her decision to bring Lena Dunham onto the campaign trail to rally support, it's no secret that Clinton's been courting the Millennial vote. So what better way to show that you're a cool Millennial than by letting everyone know that you're down to Netflix And Hill?

Right now, Sanders has significantly fewer delegates than Clinton, but that doesn't mean he's down for the count. If you still believe in Bernie, you can rock this vintage-inspired button.

Clinton is the undisputed queen of pantsuits, so it should come as little surprise that her campaign has started making the ultimate blazer accessory. If you're rocking your own pantsuit every once in a while, go ahead and pop one of these lapel pins with Clinton's logo on the collar.

These simple campaign buttons will clearly let any passerby know exactly who you're supporting this year. Bonus? Proceeds from the sale of this set of buttons will go to support Sanders' campaign.

These classic buttons from the Clinton campaign are designed to be heirlooms for the future. Seriously. It even says in the product description, "You’ll want to pass down these buttons down to your granddaughter." These are souvenirs you'll want to hang onto for generations, especially if Clinton becomes the first woman in the Oval Office.

Maybe neither candidate is quite doing it for you, but you still know you'll be voting for the Democrats come this November. You can show off your party affiliation with this simple, circular pin with the sleek logo of the Democratic Party on it.

The donkey has represented the Democratic party since Andrew Jackson was running for president, and though the party has officially moved toward that sleek "D" logo, there's something totally nostalgic and heartwarming about rocking this red, white, and blue donkey lapel pin.

If you don't have a party affiliation, or don't want to be labeled a Democrat, but still think of yourself as a progressive, that's OK! There's a pin for you, too! Show the way you're leaning this election, even if you couldn't care less about about partisanship.

No matter who you're planning on voting for this November, there's a pin for you. And every pin, regardless of the candidate, will be a great artifact for future generations.