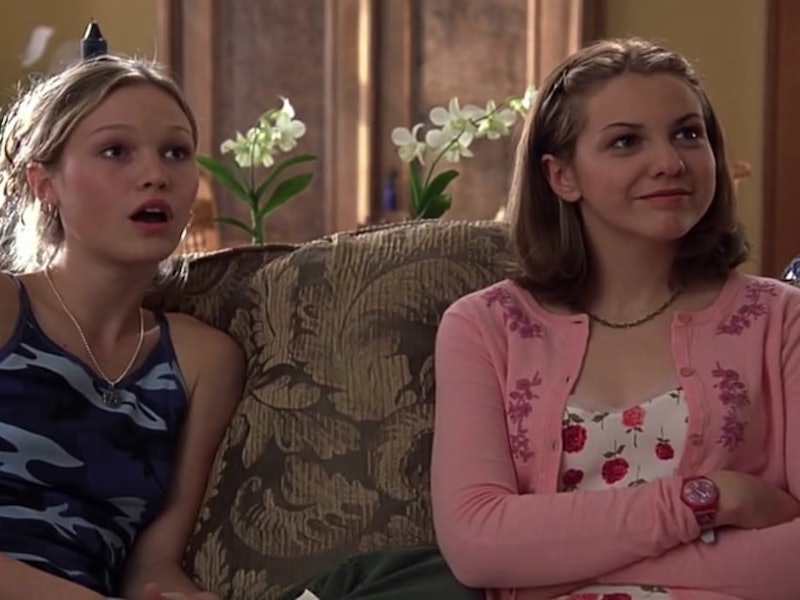 For me, the ‘90s were characterized by adolescent angst, plaid, Alanis Morissette, America Online, and sibling rivalry. My older sister and I were less than two years apart in age, and locked horns almost continuously, so, naturally, I spent most of the ‘90s stealing my sister’s stuff. When you’re that close in age to someone (and only separated by a single grade level, as we were), I think it’s normal for there to be a lot of competitiveness, jealousy, and snark, all based in a deeper sense of teenage insecurity. Throughout middle and high school, I spent way too much time trying to define myself in opposition to my sister — Is it any wonder that my favorite movie and TV show of the ‘90s were 10 Things I Hate About You and Daria, respectively?

As much as I perceived my older, cooler sister as the Quinn to my Daria, I still profoundly coveted nearly everything she owned, especially the clothes, and if I nicked the occasional item from her room, well, chalk it up to immaturity. These days, my big sis is someone I deeply admire and one of my favorite people on the planet. That said, if I lived in the same city as her, I would still totally steal about 90 percent of the stuff in her closet.

If you had a sister in the '90s, you definitely stole these things, too:

In the mid-'90s, everyone went crazy for Calvin Klein’s new unisex fragrance. The minimalist bottles were everywhere, but they were expensive (especially for a 7th grader). So when your sister got a bottle, you wasted no time in sneaking into her room for a spritz every once in a while.

(Her beloved CK1 crop top was a different story — she wouldn’t let you anywhere near that ultra-trendy item.)

Having a sister close to you in age often means that you both try to be as different from each other as possible. In the ‘90s, that meant that if she liked *NSYNC and the Backstreet Boys, you had to hate them, and ignore those bands’ poppy hits in favor of angstier fare from Garbage, Nirvana, and Oasis. The problem, of course, was that the sugary, infectious hits of ‘90s boy bands are basically undeniable, and for all your protests, you secretly loved “Bye Bye Bye.” So if you sometimes snuck your sister’s copy of No Strings Attached into a Discman and danced around in your room, well, where was the harm? It’s not as if anyone had to know.

Achieving that perfect glittery glow was harder than it looked.

A huge perk of having a sister close to you in age in the ‘90s was that you got to borrow dresses for school dances. These lovely frocks had all the markers of ‘90s formal wear — spaghetti straps, short skirts, iridescent fabrics… Timeless, right? There was even a crop top/full skirt combo in your sister’s closet, a la Bianca in 10 Things I Hate About You.

Obviously, you did not steal the Rachel from your sister’s head, but when she came home from the salon sporting the coolest haircut on TV, you knew you had to have it, too. (Somehow it never looked as good on your head as it did on Jennifer Aniston or your big sis.)

Back in the day, you couldn’t just slap together a playlist on you iPod in a few seconds, the way you can now (Yes, I know. That makes me and other ‘90s kids ancient). Making a mix tape or mix CD took time, and a good one was like gold. So, naturally, you stole them from your siblings.

You weren’t even particularly obsessed with video games, but when your sister got a Sega Game Gear, complete with mini version of Sonic the Hedgehog, you were green with envy.

Platform flip-flops were so cool that it didn’t matter that they were really hard to walk in. (Well, for klutzy people like me, at least.)

When your sister came home with new slang in tow — especially if it was an insult — you adopted it immediately. There was no way that you’d let her wield slang that you didn’t know. I mean, as if.

Also, thanks to '90s slang, many of the skirmishes you had with your sibling was basically some variation of saying something, followed by “NOT!” or possibly “Psych.” If you wanted to mix it up, you added some “Whatevers” (with finger Ws, obvs) and “Talk to the hands” in there. Y’all were classy like that.

Did I mention I’m a middle kid? As an adolescent, it was natural for me to mostly covet the stuff of my older sister, rather than the one who was three years younger than me (although even at that point, her clothes were cooler than mine). But once in a while I glommed onto her stuff, too. Case in point: Toothbrush bracelets! Why, I don’t mind if I do! (Also, I just figured out which DIY project I’m doing this weekend).

More like this
The 'Hocus Pocus' Sequel Finally Has A Release Date & It Makes Total Sense
By Shannon Barbour and Radhika Menon
I Tried Marilyn Monroe's Makeup Tricks, & They're Pretty Genius
By Olivia Rose Ferreiro
Penn Badgley & Leighton Meester Met On A Horror Movie Set Before 'Gossip Girl'
By Jake Viswanath
10 Nail Trends That Perfectly Capture The Early 2000s
By Paris Giles
Get Even More From Bustle — Sign Up For The Newsletter