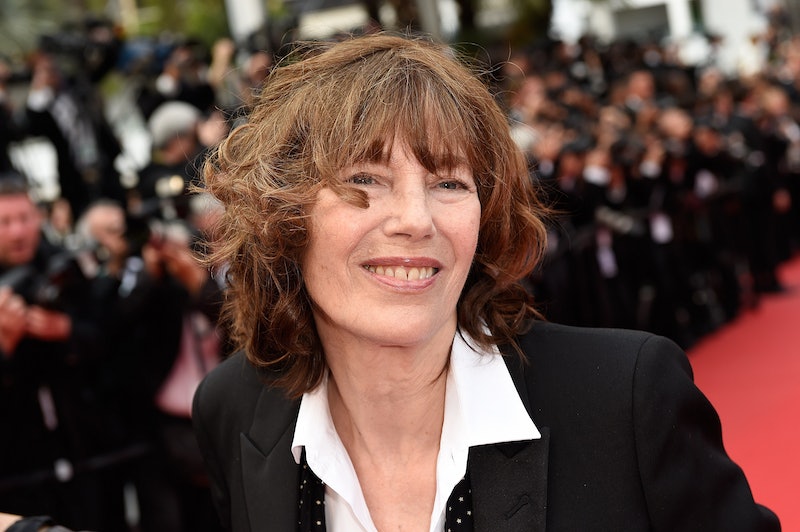 The influence of iconic actor Jane Birkin is undeniable. After all, she was the muse for the renowned Hermes Birkin bag. Now the 69-year-old star has confirmed that style is ageless by appearing in a new Saint Laurent campaign while sporting one of the brand's classic tuxedo jackets, The Telegraph reported. The shots shared on creative director Hedi Slimane's Twitter account are simple in their beauty: Black and white images of Birkin looking both smiling and sultry. It's all quite fitting, considering "there is no living person more referenced in the world of fashion" than her, as Vogue put it.

Using a '60s icon in a way that feels simultaneously timeless and contemporary makes a powerful point about star factor. Although social dogma and mainstream media might often lead us to believe that a woman's greatest value is in her youth, collaborations and projects such as this one prove that fashion, beauty, and style don't have to be forgone once a person is over 40. In fact, there's an added sense of glamour and wisdom to these shots that, if you ask me, wouldn't have likely been achieved by featuring someone in their 20s.

At 69 years old, Birkin looks indisputably stunning for this Saint Laurent campaign. While I can't wait too see even more images for my own personal delight, I'm even more excited to see the influence that this campaign might have on the fashion world at large as well.

This isn't the first time Saint Laurent featured a mature model. Joni Mitchell was the face of a different campaign in Jan. 2016. And since then, Models over 40 years old haven't been as much as a rarity as one might think. Throughout 2015 alone, a more mature age group saw a dramatic rise in representation within the fashion and beauty industries.

Now, more than ever, we're experiencing a celebration of older women in fashion and beauty. Incredible women over 40 were even featured in the 2016 Pirelli calendar, shot by the iconic 66-year-old photographer Annie Leibovitz.

Hopefully this trend will proceed to be more than just a trend, but a legacy that lasts in the worlds of both fashion and beauty. One that celebrates aging women in the same way that aging "silver foxes" are celebrated. One that doesn't connote feminine people's worth to their youth, or to the appearance of youth. If any campaign was going to inspire this kind of shift, it would definitely be something like this simple, refined Saint Laurent shoot.