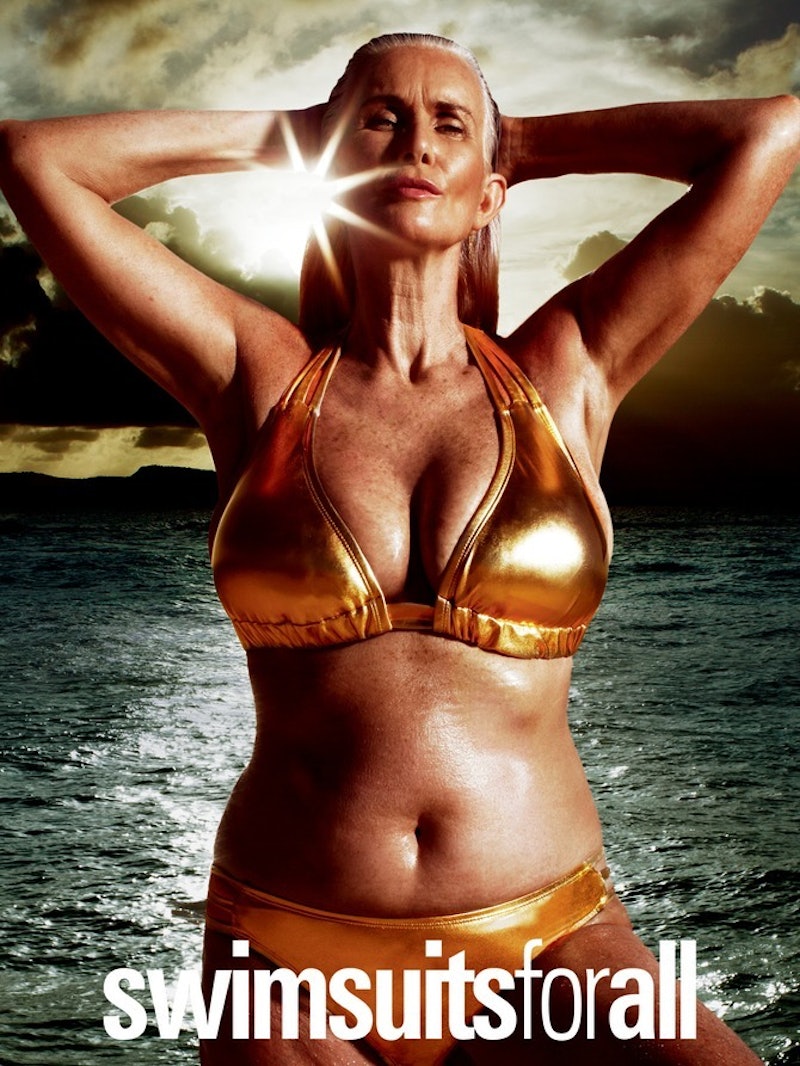 The 2016 Swimsuit Edition of Sports Illustrated is set to be the most body positive yet, thanks in part to the inclusion of 56-year-old model Nicola Griffin in the swimsuitsforall advertising campaign #SwimSexy. It's a campaign that champions beauty and diversity equally by featuring not only British mature model Griffin, but Sports Illustrated cover star Ashley Graham and British Ghanaian plus size model Philomena Kwao. By highlighting a model not only over 40 years old, but over 50, despite the ageist world we undoubtedly live in, swimsuitsforall and Sports Illustrated are taking a stand against body shaming as well as ageism.

Griffin has only been on the modeling scene for three years, but her 2015 campaign with plus size designer Anna Scholz spoke for the beauty that resides in older women with the simple tagline, "My favorite age is now." Removing the stigma against women's aging has been a hot topic as of late, especially after Star Wars' Carrie Fisher's Twitter rant against ageism and sexism.

The times are finally changing, and thankfully it's not just Griffin fighting for beauty to be recognized at all ages. Although the successful model epitomizes why ageism is so ridiculous, there are other babes over 40 out there fighting the same fight within the industry. Here are some of the queens.

A 64-year-old model, Jacky O'Shaughnessy, made headlines in 2014 with her American Apparel lingerie ads. She was discovered by the company in New York and used for its "Advanced Basics" campaign in 2012. But it was her American Apparel advertisements that really proved that her work as a model wasn't just a fad. This is one talented human.

Just about the most obvious star on this list, Naomi Campbell hasn't seemed to slow down despite the ageism issues in the industry and the world at large. In January, it was even announced that she'd star in the Spring/Summer 2016 campaign for Balmain.

This model became an icon in the '60s and has been going nonstop ever since. Many of us Millennials will remember her from her stint as a judge on America's Next Top Model. But her work as an actual model in the industry was arguably more history-making than anything else. And in Jan. 2015, the British superstar was revealed as the UK Ambassador for L'Oreal Professional. Going from a model who epitomized youth to one who proves age doesn't matter is truly impressive.

A businesswoman and style icon in her own right, Iris Apfel takes to modeling from time to time and always looks incredible while doing so. Her 2015 Kate Spade campaign with Karlie Kloss is just one example of how an older woman can interpret fashion in way more ways than one.

Although Joan Didion is known primarily for her writing as a journalist and an author, the icon starred in Celine's Jan. 2015 campaign and proved that style is truly ageless.

I wish that there were 100 people to name in a list such as this, but these six stars are the ones we have to support and appreciate as they get older, and as we await for the world to (hopefully) get more body positive.