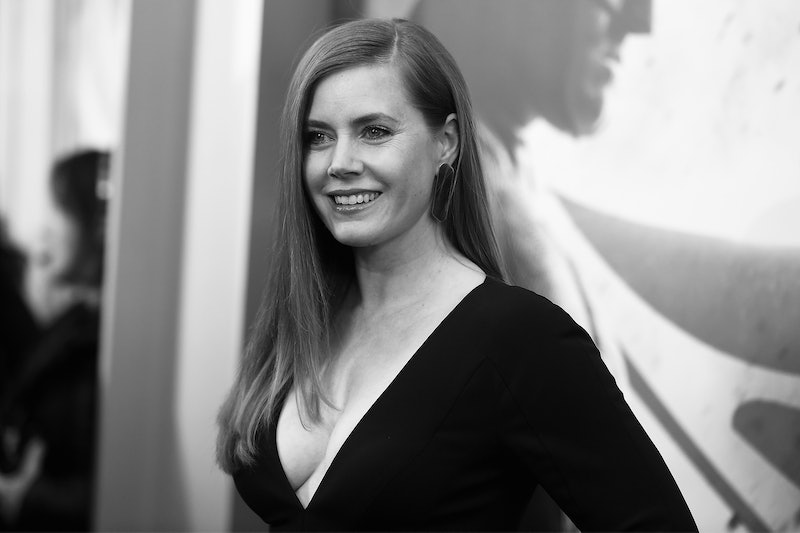 Gillian Flynn has found a perfect home for her new series: on Friday, Deadline reported that HBO won a bidding battle with Netflix for the rights to a screen adaptation of Sharp Objects , Flynn's 2006 novel. If you're a Flynn fan, you know the series has been a long, long time coming, and it's exciting to see it finally come to fruition. Adams is up to the task to play the complex protagonist, Camille Preaker, who is as Female Antihero as they come. And we need more characters like her. Male antiheroes have been dominating the TV landscape forever, often credited with the boosting the Golden Age of television, and we need women in these roles too.

Deadline reported on Friday that HBO ordered an eight-episode first season of the show, with UnREAL co-creator Marti Noxon as showrunner (hell yeah, more female showrunners!) Flynn will also be a writer of the show. Adams is playing the role of journalist Camille Preaker, a young woman living and working in Chicago covering grisly crimes while dealing with her own traumas, mental illness, and the ever-looming death of her sister Marian that happened years ago.

She's called upon to return to her home of Wind Gap, Missouri, to investigate the murder of one young girl and the disappearance of another, as well as reconnect with her estranged mother and half-sister. Flynn is known for writing complex, flawed, even evil women — how can you forget Gone Girl? — and though Preaker from Sharp Objects isn't as dark as obviously Amazing Amy, she will be one of the most unique female antiheroes on TV.

The trope of the Troubled Man on TV is an old one, and admittedly, there have been some incredible television bad guys in recent years that are so damn easy to love to hate and hate to love. Gone now are Tony Soprano, Walter White, Don Draper, and Hannibal (RIP), but Frank Underwood from House of Cards, Jimmy McGill from Better Call Saul, and Justin Theroux from The Leftovers are still dominating. Meanwhile, female antiheroes go undernoticed or under-appreciated, though they are often better at the role than their male counterparts. Robin Wright's Claire Underwood comes to mind, as well as Scandal's Olivia Pope. There's also Jessica Jones, played by Krysten Ritter, who is ah-may-zing, and Cookie from Empire, who is a total TV gift.

There are arguments about HBO's Game Of Thrones being rife with sexism, like misogyny and violence toward women — a problem sometimes chalked up to historical accuracy (but wait, I thought it was a fantasy series...?). But the cut-throat game allows for a whole host of incredible female antiheroes, many of whom are themselves strong contenders for the Iron Throne. While Jaime Lannister is a swaggering, one-armed antihero, he pales in comparison to his fiery twin sister Cersei, who in the most recent full-length trailer for Season 6 proclaims, "I choose violence." GoT has proven that women in Westeros are as cunning, calculating and capable of taking the Iron Throne as the men are, and the Spider Varys tells Tyrion his goal is to install Daenerys as queen, because she is going to "break the wheel," in her own ominous words.

One of the most underrated antiheroes on a show you should be watching is Rachel from UnREAL , Lifetime's scripted satire sitcom about a woman who is a producer on a Bachelor-style show called Everlasting. Rachel is conflicted, pulled between her principles and being good at her job.

Luckily, Marti Noxon from UnREAL is the showrunner on Sharp Objects, and with a female showrunner paired with writer Gillian Flynn and star Amy Adams, there's no doubt that Camille will be an iconic antihero. Though you might not know Noxon's name, you definitely know her work: a successful producer and writer, she's worked not only on UnREAL, but also on Grey's Anatomy, Private Practice (both with the inimitable Shonda Rhimes), Mad Men, currently Girlfriend's Guide To Divorce, and a little show called Buffy The Vampire Slayer.

It's a dream team to bring this nightmare of a story to screen, and Sharp Objects is not just a murder mystery, but also explores themes of mental illness, mother-daughter relationships, and trauma. And that kind of female antihero is just what TV needs more of right now.