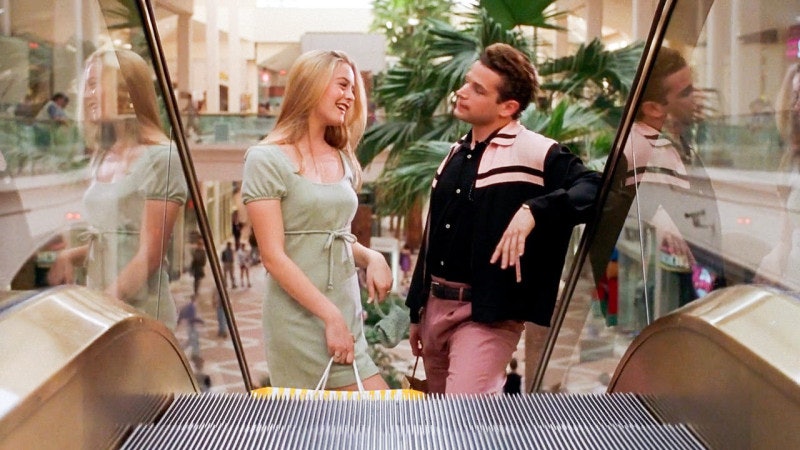 If you grew up in a suburb-like area during the ‘90s, odds are you spent a fairly considerable amount of time at the mall. That doesn’t necessarily meant you spent that time shopping, though; in fact, most of the things you did at the mall in the ‘90s probably didn’t involve shopping at all. If a mall is basically a playground for consumerists, well, then, you’d better believe we got creative about how we amused ourselves in it. Everybody knows it’s more fun to try to walk up the slide than it is to use it for its intended purpose, right?

For our purposes here, I’m defining “shopping” as “actively looking for things to purchase, and then actually purchasing them.” This doesn’t mean that the non-shopping activities we partook in at the mall didn’t involve the exchange of money; they might — just not in the standard, “go to a store specifically intending to buy something, look around and/or try something on, find what you need, then exchange your money for it at the cash register” sort of way. You might wander to the food court for a snack, or play a few rounds of Skee-Ball, or pretend you were a part-time model and walk away with a few photos for your trouble — all of which were the result of a little spending. Arguably, though, they were more fun than plain ol’ shopping. Who needs the hunt for the perfect pair of flaired jeans when you’ve got Dippin’ Dots?

In any event, I’m willing to bet that a lot of other suburban-dwelling ‘90s kids out there probably did at least a couple of these 17 things on the regular growing up — especially after we got old enough for out parents to let us loose at the mall unsupervised.

Now if you’ll excuse me, I have to go prepare for my Glamour Shots.

1. Spend All Your Quarters At The Arcade

If you managed to make it all the way through the Teenage Mutant Ninja Turtles arcade game, you were nothing short of arcade royalty.

Probably with a slice of Sbarro pizza on the side.

3. Giggle At The “Adult” Stuff In Spencer Gifts

I’m willing to bet that most of us first encountered what we would later understand to be common bachelor/bachelorette party paraphernalia at Spencer Gifts during our formative years. Penis straws and boob-shaped gummy candies only make sense in certain contexts.

4. Try On All The Things Your Parents Wouldn’t Let You Wear

Tube tops. So many tube tops.

5. Paint Your Nails All The Colors Hard Candy Had To Offer At Sephora

I still remember when the first Sephora opened up in my local mall. It was a magical place full of brightly colored gloriousness, and I definitely painted every nail on each hand a different color using all the Hard Candy testers at least once. This, of course, was back when Hard Candy could actually be found at Sephora; they were known for their unique nail colors (in fact, they're probably responsible for my lifelong love of blue nail polish), and for the chunky little rings that came attached to them. Heck. And yes.

6. Spray Every Single Victoria’s Secret Fragrance Tester On Yourself

Because it wasn’t a trip to the mall unless you walked out of there smelling like Strawberries And Champagne With A Side Of Pear Glace All Wrapped Up In A Love Spell.

Are mall dates still a thing for the budding young romantics of the world? From what I remember, they didn’t really consist of much — mostly they were just wandering around while awkwardly holding hands without actually buying anything, because you were a pair of broke kids, after all — but they were definitely a rite of passage for those of us who grew up in the ‘90s.

8. Try To Sneak Into An R-Rated Movie

If, that is, your mall was the type that had a cinema attached to it. Whether or not you actually succeeded at sneaking in is still up for debate, depending on how you define “success.”

9. Daydream About All The Hot Topic Bumper Stickers You’d Put On Your Car When You Finally Got One

And in the meantime, maybe you’d settle for slapping them across your Trapper Keeper instead.

10. Make A Wish By Tossing A Coin In A Fountain

Exactly why so many suburban shopping malls had giant fountains in them, I will never know. But even if they weren’t strictly meant to be wishing fountains, that never stopped everyone from tossing in their stray pennies and nickels anyway.

11. Take Some Photo Booth Pics With Your Besties

These days, I assume that kids just take smartphone selfies with their besties instead, but I still think there’s something to be said for a good ol’ fashioned photo booth. Bonus points if it was one of those ones that turned your pics into stickers you could plaster all over your locker at school.

12. Consider Getting Your Ears Pierced At Claire’s

But if you were under 18, you had to save the actual ear piercing for a time when your parent or guardian was with you.

Not going to lie: One of the first things I did when I turned 18 was get another piercing. Not because my parents hadn’t allowed me to before; indeed, I already had two holes in each ear by that point. Being able to get a fifth and final hole all on my own, though? That was pretty cool. And yes, I still have all five holes, even as a 30-something. Some things never change.

13. Plot How To Steal The Giant Cardboard NSYNC Cut-Out From Sam Goody

You never actually enacted any of your plots (because stealing is illegal and not a thing anyone should do, ever), but you came up with a new one pretty much every time you walked by the store anyway. Exactly what you planned to do with the cutout if you ever acquired it, however, remains a mystery.

14. Pose For Your Glamour Shots

Or not. I didn’t, but from what I gather, getting Glamour Shots taken was a Thing People Who Were Not Me Did, so, y’know, you do you and all that.

15. Ride The Escalator A Million Times

How else are you going to crisscross the entire mall countless times in order to make sure you visit every single one of your favorite stores — even if you had no plans to actually buy anything?

Or the Easter Bunny, depending on the time of year and/or your religious affiliation. Note that this activity was (and still is) typically reserved mostly for the younger set; however, I suppose there’s a first time for everything.

17. Find A Payphone So You Could Use Your Calling Card To Ask Your Parents To Come Pick You Up

Remember when no one had cell phones? Like, at all? Yeah. Good times.