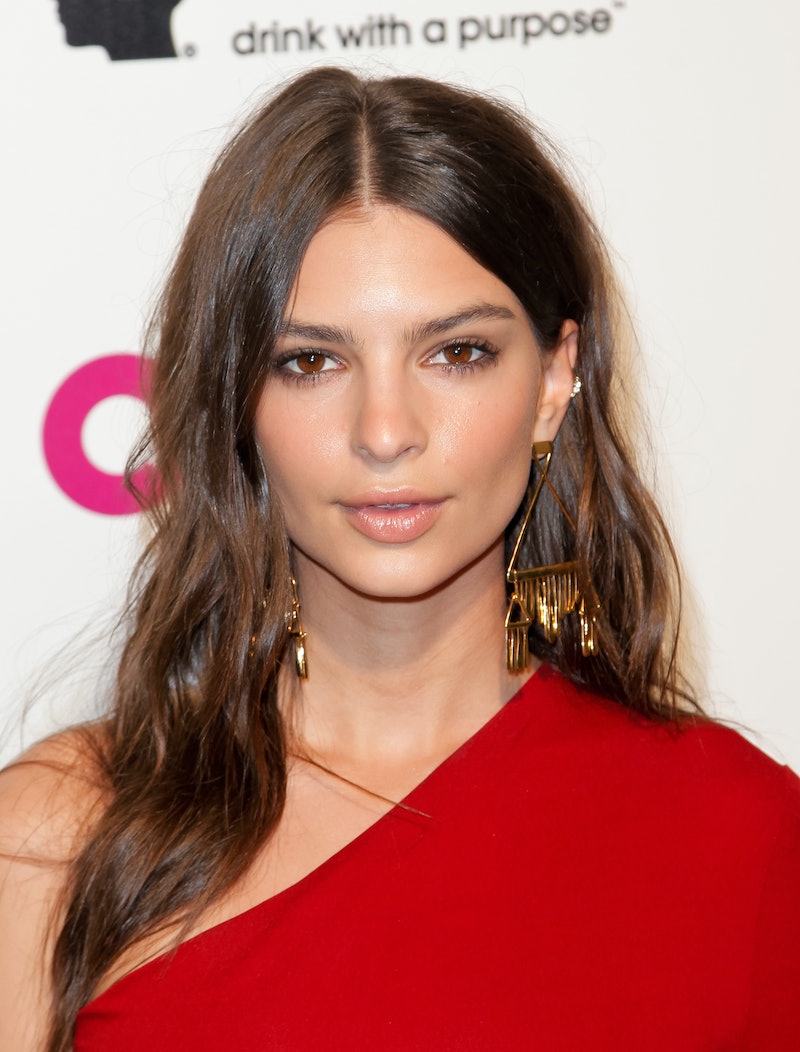 Just when the conversation about Kim Kardashian's naked selfie was beginning to die down, she decided to give everybody even more to discuss. Last Wednesday, Kardashian shared another topless selfie — this time with Emily Ratajkowski. The two women emphasized the liberating feeling of expressing yourself and not hiding your body. As Ratajkowski eloquently wrote alongside the photo, "We are more than just our bodies, but that doesn't mean we have to be shamed for them or our sexuality." I'm a big supporter of the actor's powerful statement, but I can't help but wonder: How do Kardashian and Ratajkowski know each other? This is surely the start of a beautiful friendship.

Unlike someone like Jonathan Cheban, who's perpetually by Kardashian's side, the Gone Girl actor seems to be a new addition to the reality star's clique. The first public interaction between these two women was when Kardashian sent Ratajkowski flowers, thanking her for standing up for her previous nude selfie (the one that started all the media hoopla to begin with). Ratajkowski had originally tweeted, "Love when a man comments on a woman's decision to post a nude photo. Her body, her career. Sexist bullsh*t. @KimKardashian." She's right — it's BS indeed.

Although there's no zoom feature on the Instagram app, I was able to look closer on my laptop. Kardashian's card reads, "Emily — Hey I wanted to thank you so much for your support last week. I saw your tweets and just think it's so powerful when women support other women! So thank you. XO, Kim." If considering context clues, the fact that she says, "I saw your tweets," not "thanks for texting me last week," makes me think they don't hang out regularly. But at least it's sweet to see that they have each other's backs.

Considering these two both believe in embracing women's sexuality, it makes sense that they'd team up to tackle unfair stereotypes. It's unclear when exactly Ratajkowski and Kardashian were introduced, but I've decided to ponder a few possibilities to imagine instead.

1. Robin Thicke Maybe Made The Intro

While his song "Blurred Lines" has a questionable message, Ratajkowski starred in Robin Thicke's video and has been vocal about how it was actually an empowering experience. She told Esquire in 2013, "On the surface level, the naked women dancing, I understand that can be perceived that way. But we're directed to have a sort of confidence, a sarcastic attitude about the whole situation. That eye contact and that attitude really puts us in a power situation."

So, how does this relate to the Keeping Up With The Kardashians star? Believe it or not, Thicke sang at Kardashian's wedding. No, not the ceremony with Kanye West, but instead, her 2011 marriage to Kris Humphries. Although her relationship with Humphries didn't last, perhaps her friendship with Thicke did and he connected these two strong women.

It's no secret that Kardashian's little sister, Kendall Jenner, is close with Cara Delevingne. They even lovingly call themselves CaKe. This also means that Kardashian has hung out with Delevingne and snapped the occasional selfie together.

In August 2015, Ratajkowski defended Delevingne's decision to start acting in a conversation with Entertainment Tonight. Maybe Delevingne played friendship matchmaker and decided to introduce her mutual friends. It's certainly plausible.

This one may be a stretch, but bear with me. Ratajkowksi played Andie Fitzgerald in Gone Girl 's movie adaptation in 2014. In 2015, Kardashian got in a fight with her brother Rob, because he compared her to another character in the movie, that he dubbed a "crazy b*tch" on Instagram.

That whole scenario is rather confusing, but the underlying and important theme here is that Kardashian has seen Gone Girl. Maybe she's such a big fan that she went out of her way to contact Ratajowski, leading to their friendship.

4. At A Secret Meeting Of Celebrity Feminists

Considering they've both written about women's sexuality — Kardashian in her essay defending her selfie, and Ratajkowski in Lena Dunham's Lenny Letter — maybe they met on the feminist blogging scene. One of them could've read something the other wrote, and before you know it, they became instant friends. This could have gone down way before the whole selfie debacle. Or perhaps there's a secret society of celeb feminists, where they join forces to tackle important issues.

Even though I'm not sure how these two met, I'm sure glad they did. Here's hoping there's more empowering statements from them in the future.