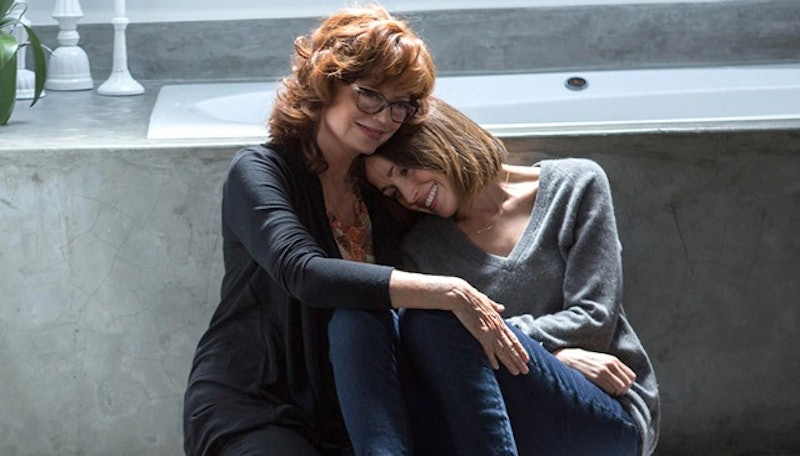 Back in November, when Angelina Jolie revealed in a New York Times interview that she was the first female director her husband Brad Pitt had ever worked with, many were appalled; could Pitt, an actor whose resume spans four decades and 75 projects, really have only acted under male filmmakers? Yet quickly, the uproar settled into resignation; with the number of female filmmakers being as low as it is (women made up just 1.9 percent of directors in 2014's top movies, according to a 2015 USC Annenberg Study), perhaps it's the industry, not Pitt, who's to blame. Even if he had tried, could Pitt, or any actor, really have managed to work with more women? Well, when I speak to Susan Sarandon, star of the new (female-directed) movie The Meddler, the answer becomes a clear yes.

"My last four movies have had female directors, and one of them [2015's About Ray] had a predominantly female crew and trans crew," says Sarandon, speaking alongside her Meddler co-star Rose Byrne. "We need to work towards more gender balance in terms of women having more opportunities."

The Meddler, written and directed by Lorene Scafaria, is about as feminist as it gets: the movie focuses on a widowed woman (Sarandon), her relationship with her grown daughter (Byrne), and her friendships with her daughter's pals (including Cecily Strong as a lesbian mom planning her own wedding). With its few male characters relegated to small, supporting roles, Scafaria jokes to me that the film barely passes the "opposite Bechdel test," a fact that its stars tell me they're thrilled about. Says Sarandon, "It had all those women who were amazing to work with and really fun."

However, the actor is quick to add that having a female director "is not a guarantee on the way they tell the story" — meaning that gender equality in film should simply be about obtaining a balance of women and men, and isn't telling of a film's quality or its on-set environment.

"I’ve worked with one woman who was incredibly mean to all the girls on the set," the actor says. "The point where we are in history means that you can have female assholes just as easily as you can male. And that’s liberation, right?"

She laughs, but it's clear that both she and her co-star take the matter seriously. Byrne, who's worked primarily with male directors in her career, credits The Meddler's "rich female characters" as a primary reason she was attracted to the film. She expresses her excitement over having worked with Scafaria, but adds that it's having great roles for women — whether or not they're created by women — that's most important, nothing the on-screen women created by her Bridesmaids and Spy director Paul Feig as a prime example.

"Paul Feig, he’s such a champion of women," Byrne says. "That’s his whole motivation, to put great female roles on-screen. So yeah, whether it's’ Paul Feig or Lorene, [it's about] whoever can get it done."

It's hard to imagine anyone but a woman helming The Meddler, a movie that understands the intricacies of motherhood, daughterhood, and widowhood with spot-on precision. The film, inspired in part by Scafaria's mother, follows Sarandon's Marnie, the lonely, grief-stricken meddler of the movie's title, who begins life anew in Los Angeles, the home of her boundaries-craving daughter, Lori (Byrne). And although Sarandon jokes that the movie's title is misleading — "it sounds more negative, or something that Zero Mostel should be in," she laughs — the complex bond Marnie and Lori share will certainly resonate with audiences.

"It’s been surprising how many people say that whatever it is about this relationship reminds them of their mother," Sarandon says. "Everyone goes, 'oh my god, I just kept thinking of my mom, I had to call her when it was over.'"

For Sarandon, Marnie's constant communication with her daughter was a familiar concept (as if to prove a point, the actor's son, Jack, calls her in the middle of our interview), but for Byrne, the character of Lori, often seen snapping at her mother due to her constant meddling, was relatable in an entirely different way. Says the actor, "it was more like channeling my inner teenager a little bit."

Wherever their inspiration came from, it clearly worked; The Meddler, in theaters on April 22, is all the better due to the performances of its two leading women. As Sarandon noted, a female-led production may not guarantee a movie's quality, but in the case of The Meddler, its director and stars add tremendously to the movie's appeal.

Editor's Note: An original version of the piece incorrectly referred to Susan Sarandon's son's name as Jacob, when it is Jack.