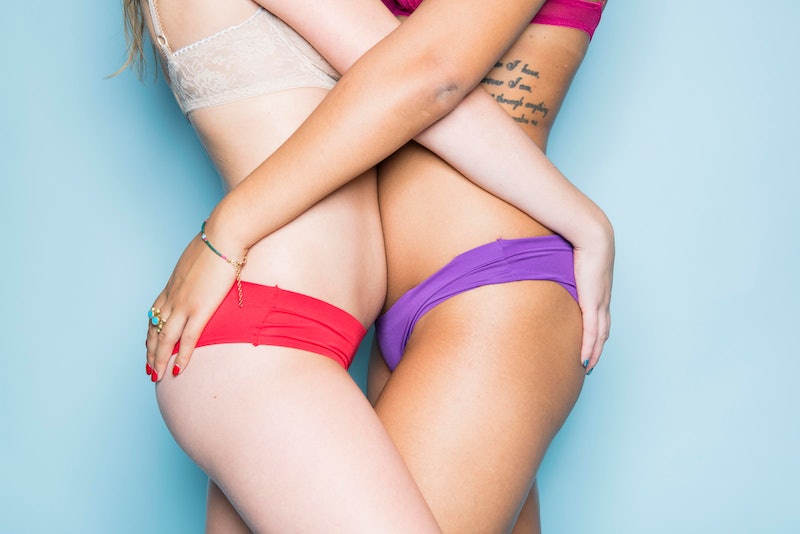 We’re always hearing that we could be having better sex, a better orgasm, or a better relationship. But how often do we hear the nitty-gritty of how we can actually better understand our deepest desires and most embarrassing questions? Bustle has enlisted Vanessa Marin, a sex therapist, to help us out with the details. No gender, sexual orientation, or question is off limits, and all questions remain anonymous. Now, onto today's topic: whether "lesbian bed death" is real or a myth.

Q: “I’m 25, bisexual, and in my first serious relationship with a woman. I recently met her friends for the first time. They started teasing me once they learned that this is my first lesbian relationship. One of them kept joking about how I’m about to get a crash course in the lesbian stereotypes like bringing the U-haul to the second date and trying to avoid ‘bed death’. She seemed like she was joking, but the ‘bed death’ part freaked me out a bit. I’ve heard all of those jokes before, but it was different to hear them coming out of a lesbian woman’s mouth. One of the things that drew me to my girlfriend in the first place was the crazy chemistry we have. We’ve had amazing sex even from the get-go. I consider myself a really sexual person, and I can’t stop thinking about the ‘bed death’ thing. Are lesbian relationships really more susceptible to losing passion? How can I avoid it in my relationship?”

A: Thanks for the question! As a sex therapist, I deal with a lot of frustrating rumors about sex, but the idea of lesbian bed death is one of the most frustrating. For those who aren’t familiar with the term, it’s the idea that the passion dies off quickly when two women are in a relationship with each other. They become more like roommates than lovers. To be clear, there’s nothing wrong with companionate relationships, but the idea here is that it’s unavoidable for lesbians. So let’s talk about lesbian bed death mythology: Is it real? Why does it happen? And how to prevent it.

The Origins Of "Lesbian Bed Death"

The term “lesbian bed death” was dreamed up in the eighties by sociologist Pepper Schwartz. In her book American Couples, Schwartz shared research she and research partner Philip Blumstein had conducted on the sex lives of straight, gay, and lesbian couples. They found that lesbians have less sex than any other type of couples. Approximately half of lesbians in long-term (two years or longer) relationships reported that they had sex once a month or less.

The Problems With "Lesbian Bed Death" As A Concept

Oh boy, how much time do you have? In their study, Schwartz and Blumfield asked couples how often they had sex. The word “sex” has historically been pretty ambiguous in lesbian communities, especially in the '80s, and a lot of lesbian women might not have described what happened in their bedroom as “sex”. I’ve complained before about the fact that most people tend to have a pretty narrow definition of the word “sex” — defaulting to P-in-V intercourse. Some lesbian women have internalized these limited (and arguably homophobic) beliefs about what sex entails, while others simply don’t relate to that word.

Additionally, Schwartz and Blumfield focused solely on sexual frequency, with no regards for quality. Finally, their sample size was rather limited. No one research study is ever going to be flawless, but it’s unfortunate that so much weight got put on this one.

Other Research On Lesbian Sexuality

The bad news: lesbian women tend to be pretty underrepresented in sexuality research. The good news: we do have other research to examine. In 1979, Masters and Johnson found that lesbians reported greater sexual satisfaction, including, “more full-body sexual contact, rather than genital-focused contact, less preoccupation or anxiety about achieving orgasm, more sexual assertiveness and communication about sexual needs, longer lasting sexual encounters and greater satisfaction with the overall quality of one's sexual life.”

A 1995 Advocate Survey of Lesbian Sexuality and Relationships found that lesbian women reported having more enjoyable sex than straight women. A 2014 Indiana University study found that lesbians have more orgasms than straight or bisexual women. Even if we make the assumption that lesbians have less sex than their heterosexual counterparts, the sex that they do have is longer, more pleasurable, and ultimately more satisfying. There are more orgasms, but less pressure to orgasm. What’s so bad about that?

Why The Lesbian Bed Death Myth Is Damaging

In my experience working with lesbian couples in my sex therapy practice, the fear of “bed death” looms large. For some women, it almost feels unavoidable. Women are so afraid of it happening in their relationship that it sometimes turns into a self-fulfilling prophecy. Even if your lesbian relationship genuinely does experience a decline in passion, there’s something about labeling it “lesbian bed death” that makes the problem feel unfixable.

This myth truly does a huge disservice to the lesbian community, and arguably to all of womankind. It gets wrapped up in other myths about female sexuality, including that women are frigid, or that we’re less sexual than men. It’s especially frustrating knowing that the lesbian bed death myth is not even grounded in reality.

What You Can Do To Keep It Fresh

OK, so now that we know why the term is super-problematic, let’s talk about what you can actually do to maintain your sizzling hot sex life with your girlfriend. First of all, it’s important for you to recognize that almost all couples struggle with trying to maintain that level of passion they initially felt. Plus, our sex drives aren't a fixed value; they wax and wane over the course of our relationship. We have to put effort into our sex lives, and keep trying to make it a priority. There are a million different ways to do that, but here are just a few ideas to get you started:

Have a private conversation with your girlfriend. Ask her about her history with and feelings towards the lesbian bed death myth. What's it like for her when she hears those jokes? You can use it as a way to open up conversations about how the two of you can keep prioritizing your smoking hot sex life.

You can also greatly contribute to better conversations about sexuality by refusing to engage in the lesbian bed death myth. The next time someone teases you about it, say something like, “I know you’re just messing with me, but I actually think we do ourselves and our community a disservice when we talk about lesbian bed death. I don’t like those stereotypes, and I don’t think they’re true.” Instead, try sharing ideas of ways you’ve kept your sex life hot, or ways you prioritize making time for each other.