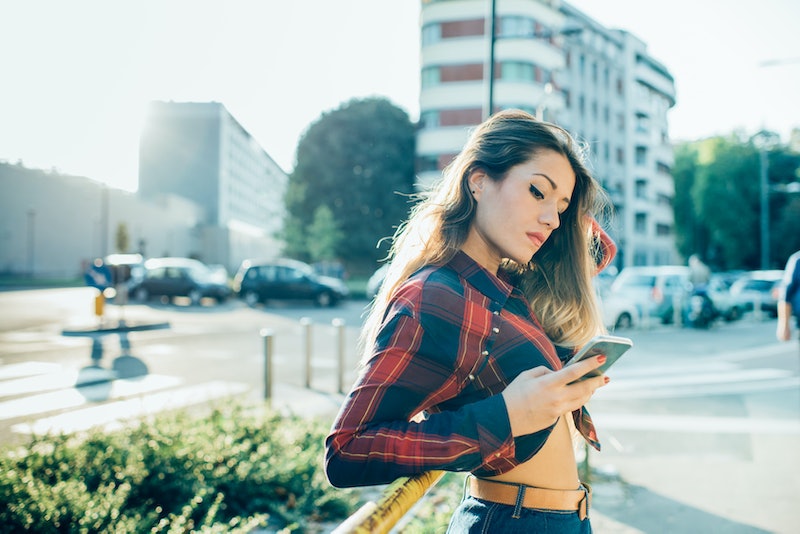 A lot of people choose not to outright state that they’re interested in casual dating or casual sex on their online profiles, and that’s for a good reason: There are a lot of creeps online. As a bisexual woman who was only sorta, kinda looking for a serious relationship back when I was frequenting OkCupid, I learned all too quickly what happened when I said I was interested in “casual sex.” I was interested in casual sex but you can bet that I took it off of my profile faster than you can say “friends with benefits” because I got inundated with messages from dudes who assumed that they could get super explicit before even saying “Hi.” Somehow seduction and common decency just flew out the window as soon as those guys thought the words “NSA sex.”

And that’s a bummer, you know? I think I could have made better matches if I’d felt like people would still be respectful of me as a person if I made my interests clear. Also, a lot of mismatches and hurt feelings could be averted if people felt comfortable being straight up about the fact that they’re only looking for something casual. Instead we’re stuck with people who are looking for life partners going out on dates with people who just want someone to hook up with that night. Lose/lose, right?

Obviously the bigger issue is our culture — which not only views casual intimate relationships and casual sex as invalid but also shames people who are interested in those types of relationships — and, unfortunately, that’s not changing any time soon. (But we’re working on it! I promise!) Another issue is that while it’s sort of understood which sites and platforms are used for which types of dating, most of the most popular, mainstream ones aren’t explicit about whether they’re a hookup app or a “friend finder” or for people looking to get married.

So while we work hard at changing the culture at large, here are five things you can do if you want to date casually online without being a creep. But first, check out the latest episode of Bustle's Sex and Relationships podcast "I Want It That Way":

1. Don’t Get Sextual Right Away

Plenty of people on online dating sites and apps aren’t interested in dirty talk right off the bat. If that’s what you’re into, fine, but remember that others may not be comfortable with that. Try the usual small talk first — you know, stuff like “Hi” and maybe a question or two about the person’s life — even if your end goal is sexting. Trust me, the respect goes a long way.

2. Be Clear About Your Intentions — Everywhere

If you’re only looking for a hookup for the night, don’t check the little box that says you want a long-term relationship. When you’re messaging, be clear about what you’re looking for. Don’t say “Ur tits r sexy,” though. Try something like, “Yeah, I’m just casually dating right now — not really looking for anything serious. Is that cool with you?” So, you know, be polite and use common decency. You may lose some potential dates that way but that’s not a bad thing because they wouldn’t have been a good fit for you anyway.

I know I already said that plenty of mainstream apps and sites dance around exactly what their users are looking for, but you’re also a human being living in the real world, which means you know the common perception of each of the different platforms. Be thoughtful about where you’re looking for people to casually date or have sex with, because dating sites geared toward finding your soulmate are not the best choice for a hookup buddy.

I’ve been keeping an eye on one app, DOWN, for years now because they’re one of the very few out there that make it super easy to say you’re just “down” for the night or “down” for something more serious. It’s that kind of directness without creepiness that is so, so hard to find on the bigger online dating platforms.

Nope, never, no thank you! It’s not OK to send someone nude photos unless they’ve asked for them. Just like you wouldn’t take out your genitals on a date without checking in to make sure that the person was cool with seeing your genitals, you really should not send pictures of your genitals (or other parts of your naked body) to someone you’ve just “met” on an online dating site or app.

5. Treat Your Potential Dates With Respect

Remember: There’s an actual living, breathing person on the other side of that computer screen. Just because you can’t see them doesn’t mean they don’t deserve to be treated with respect. Behave as much like a decent person as you would offline.