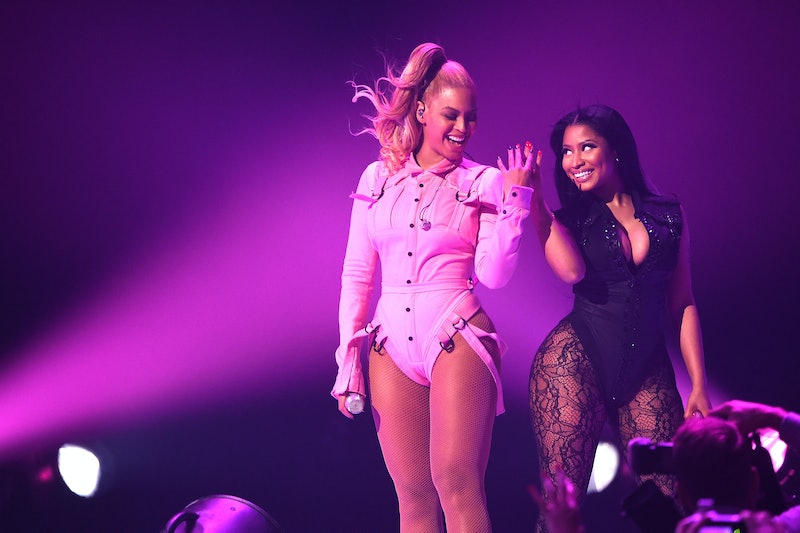 While we're all still recovering from the powerful magic of Lemonade, Beyonce's surprise visual album which premièred Saturday as a TV special on HBO, it feels like we're barely even going to have a chance to catch our breath (or get ourselves obsessively familiar with her spectacular new tracks) before the sure to be excellence of her live shows of the Formation Tour. Featuring surprising musical and celebrity cameos, Lemonade has understandably got Beyonce fans excitedly speculating whether Beyonce will have guest stars during the Formation Tour. And, let's face it, if anyone can put a dream-list of musical stars together on stage, it's probably going to be Queen Bey.

Though Beyonce certainly doesn't need any extra help from anyone on stage to amplify her presence or stir up her audience, the current musical offerings of Lemonade certainly seem to be poised for collaboration. Featuring an impressive and diverse array of musical cameos which seem to draw great strength from unity, the musical guest appearances on Lemonade created a collusion of musical genres to aid Beyonce's powerful narrative.

So, of course, how awesome would it be to see some of these musicians joining Beyonce on stage at one (or a few) of her Formation Tour dates? And let's not forget that there's also a slew of Beyonce buddies who could also still make for fantastic surprise guest appearances. While there might not have been any official indications to suggest that the following artists are going to be involved in some way, these are some of the Formation Tour special guest appearances that we're likely to see.

Right now I can barely think of anything more mind blowing than Lamar and Beyonce on stage together, and, following his guest appearance on the compelling Lemonade track "Freedom," it seems that this dream could actually become a reality. With both artists producing recent work expressing powerful laments against systematic racism and empowering projections of black identity, an on stage collaboration could be the perfect way to unite their music talents and amplify their message.

"Don't Hurt Yourself" is one of the most formidable songs off Lemonade, and it also happens to be one which Jack White collaborates on with Beyonce. A ridiculously versatile and talented guitarist, it wouldn't be too surprising for White to turn up and add some lead guitar to a handful of songs at a surprise date or two. There's even the potential there for a one-off tribute to Prince.

Featuring on Lemonade track, "6 Inch," The Weeknd definitely seems to be in Beyonce's inner-circle as they've crossed paths before. Will the Formation Tour provide fans with the opportunity to see the two musicians join forces on stage?

You probably already know this but Zendaya is not your average teenager. Multi-talented and another artist to feature in Beyonce's Lemonade (though not in a musical capacity), Zendaya has an immense singing talent, and so it doesn't seem all that unlikely that Beyonce might want to use the Formation Tour as the perfect platform with which to help elevate, support and celebrate her skills.

Having shared a duet on 2014's "Feeling Myself" with Beyonce (a song which I definitely haven't stopped playing since it was released), it was a little disappointing to discover that there wasn't even a tiny collaboration with Minaj on Lemonade. Still, an impromptu live rendition of "Feeling Myself" would be totally welcome and a perfect way to truly kick-start our Summer vibes.

Long time friend of Beyonce and Jay Z and past collaborator, Chris Martin is currently on tour with Coldplay and as a result their tour dates totally clash. But, hey, never underestimate the compelling power of Beyoncé. When she calls you up to do something, you make it work.

Naturally, and especially when considering the seemingly autobiographical aspects of Lemonade, which many think explore Beyonce's relationship with her husband, it would make sense that she'd want him around to collaborate with and to show a solid, united front by doing so.

Though it seems unlikely that Beyonce would choose the Formation Tour for a surprise Destiny's Child reunion (even if that reunion is just for a couple of songs), the 15 year old girl in me is still squealing in glee at any thought that this could be an actual thing that happens at one of the dates. Because I will never have enough Destiny's Child in my life, and I'm sure you'll agree.

DJ Khaled has been the only musical guest confirmed so far as being on tour with her, so we'll just have to wait and see who else might be announced and who might be brought out as a surprise one-time guest.