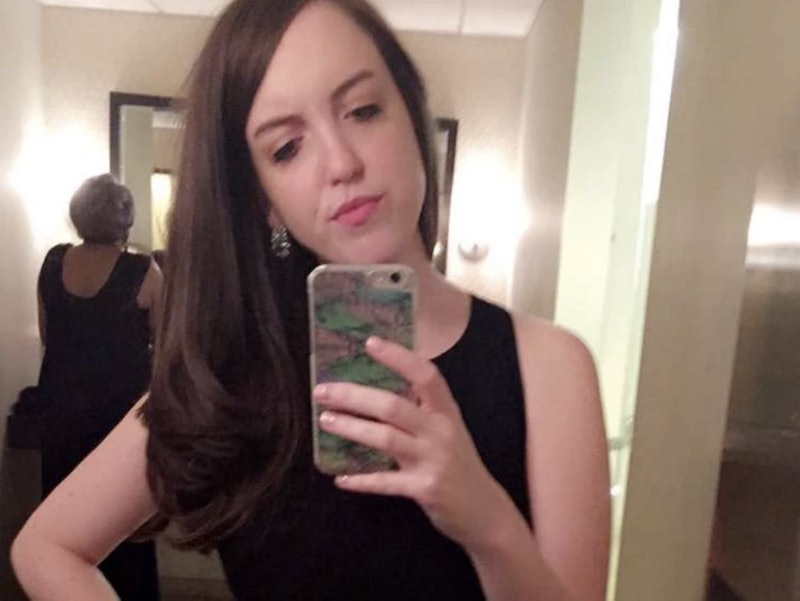 No matter what kind of party you go to — your cousin Jillian's bridal shower, your best friend's 30th birthday brunch, the White House Correspondents' Dinner — you're bound to run into the same thing: a line of people waiting for the bathroom. That's where I found myself Saturday night as I hightailed my way to the lower level restroom of the Washington Hilton, where I hoped to sit down for half a second having spent the last two hours teetering around WHCD pre-parties in heels, maybe reapply some lipstick if I could elbow my way through the throngs of sequined partygoers milling about the mirrors, and you know, eavesdrop on celebrities, who I assumed would be in there doing the same things I was doing, only it would be way more exciting and noteworthy, because they're celebrities, guys. What I didn't expect from the White House Correspondents' Dinner bathroom was for it to be... so normal.

There are certain rules of public restroom etiquette that are universally accepted without question. Don't cut in line. Don't talk to anyone in the stall next to you, unless it's coming from a place of desperation, like you ran out of toilet paper, or dropped your phone in the toilet. Don't put on an entire face full of makeup at the mirror when there are people behind you waiting to wash their hands. Don't leave paper towels everywhere. Don't leave water everywhere. Get in. Get out. The rules are simple, the rules are easy to remember, the rules are important. The rules are the reason we can expect any kind of order in this crazy and often senseless world. But at the White House Correspondents' Dinner, when people like Kendall Jenner and Bernie Sanders are just a few tables away from each other, and jokes about the Zodiac Killer make for appropriate dinner conversation, the natural order of the universe can seem a little twisted.

As everyone filed from the WHCD pre-parties to the dinner itself (which I wasn't going to), I decided to use this break in the action to freshen up, and see if there were any high-profile shenanigans to be witnessed in the hub of any social setting — the bathroom. Look, I wasn't going to creep in and Snapchat pictures of famous people as they waltzed in to use the loo, but I thought that maybe by casually hanging out by the counter and "waiting for a friend" who may or may not have actually followed me in to use the restroom, I'd be privy to the secret conversations that go down between, I don't know, Ruth Bader Ginsburg and her entourage of feminist boss pals. If nerd prom was anything like high school prom, there would be all kinds of gossip to be overheard and savored in the bathroom — did you see Justice So-and-So slinging back martinis with That Famous Journalist? Did you hear that Presidential Candidate skipped out tonight because s/he didn't want to be seen at a table with Celebrity Instagram Influencer? Are you going to President Obama's secret homies-only after party he and Michelle host every year back at their place? No? You weren't invited? This is... I... this is awkward. For intensely curious people (me) who for whatever reason weren't invited to the actual dinner itself (double me), that kind of access seemed too good to pass up.

The bathroom at the Washington Hilton's terrace level, which sadly was not a secret portal entrance into the lives, secrets, and misgivings of famous people.

When I took my place in queue at the bathroom, there definitely was chaos, with women shouting at each other from across the room "CORINNE, YOU IN HERE?" but it only took a quick sweep to notice that RBG was nowhere to be found discussing the implications of Texas HB2 with her girlfriends — there was just a bunch of women wincing in heels. There wasn't a single mention of the election, or passive aggressive comments about people notably missing from the night's festivities, or funny #Womancard quips, or superdelegate speculation, or set gossip from the cast of Scandal — just plenty of chatter about the number of jumpsuits seen tonight on the red carpet, and polite but hurried inquiries that didn't deviate from the norm, like "Are you in line?" and "Can I pop by you for a sec?" and "Whose phone is this?"

At the White House Correspondents' Dinner, when people like Kendall Jenner and Bernie Sanders are just a few tables away from each other, and jokes about the Zodiac Killer make for appropriate dinner conversation, the natural order of the universe can seem a little twisted.

And that, honestly, made the experience all the more interesting. There's this illusion of glamour and grandeur that indelibly clouds the celebrity and political spheres — we're not sure why we've put these people on a pedestal, but we have, and we like that they're there, because it gives us something to aspire to, but also fantasize about, since we don't imagine ourselves operating in a similar universe anytime soon, but wow, isn't it fun to think about? It is fun to think about — and when our expectations are disrupted, not by anything scandalous, juicy, or jaw-dropping, but by sheer normalcy? Well, that's more of a twist than anything else.

Don't get me wrong — the White House Correspondents' Dinner weekend is decidedly glamorous. People put on their best designer duds the same way they would for any red carpet event. There are cameras flashing, beautiful people with white platters offering up fancy hors d'oeuvres with names you can't pronounce, and drinks flowing. Conversation is light and fluid and dreamlike, with Scandal co-stars Tony Goldwyn, Kerry Washington, and Scott Foley chatting casually together under the thumping sounds of a DJ like you would expect them to — they're on TV together, so they must be friends. It's a fancy evening with a fancy cast of people, and you feel happy to even have the opportunity to stand in line for the bathroom at the Washington Hilton in the first place.

But the evening (and other evenings like it, I suspect) is made even more surreal by the disparity between what you expect, and what actually happens. The White House Correspondents' Dinner pre- and after-parties take place in what can accurately be described as a hotel basement. You spend a lot of time waiting — at the door, at the bar, behind a bunch of people wanting to use the photo booth. You see famous celebrities who, beautiful as they are, shockingly resemble ordinary, real life people. And that disconnect can be pleasantly jarring. It can also throw you totally off-base.

So, you do what you would do at any party. You head to the bathroom. You mess with your hair. You quickly snap a mirror pic with your friends. You compliment a stranger on her dress. And you imagine that, if Ruth Bader Ginsburg had been there in the bathroom with you, she'd be doing the exact same thing, too.

More like this
What Is Barack Obama’s Net Worth? He Makes *Way* More Now As An Ex-President
By Hugh McIntyre
How To Support Gun Control Reform Right Now
By Morgan Brinlee and Carolyn Steber
Kim Kardashian Remembers Her Last Words To Death Row Victim Brandon Bernard
By Jake Viswanath
Gillian & Edgar Are At Least Cordial After 'Temptation Island'
By Brad Witter
Get Even More From Bustle — Sign Up For The Newsletter