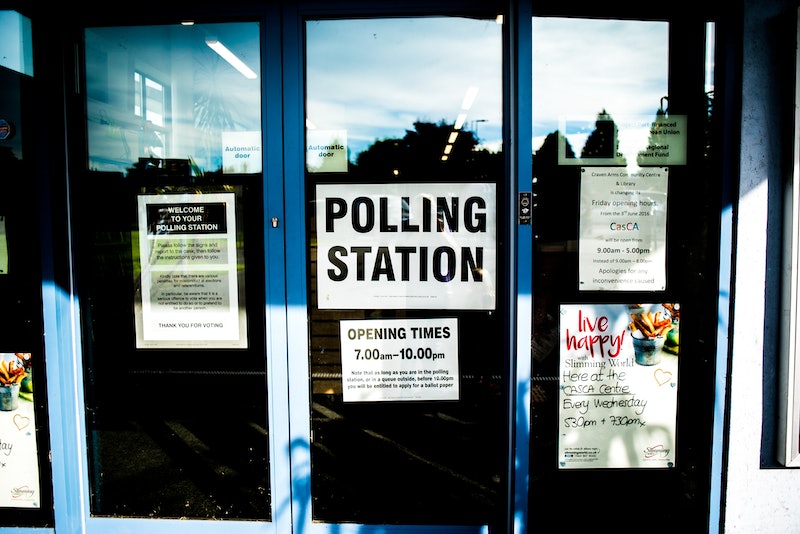 Now that we're well into election season, a lot of unfair accusations have come out about why women support their 2016 presidential primary candidates of choice. In February, Gloria Steinem suggested that many Millennial women are voting for Bernie Sanders because "the boys are with Bernie" and young women are not yet "radical" enough to vote for a woman. Many others have implied that women who vote for Hillary Clinton are just doing so because she's a woman — the charge of supposedly "voting with your vagina." Both of these accusations characterize women voters negatively, and reduce extremely complicated issues down to single deciding factors. But the bottom line is that women — just like everyone else — have good reasons to support the candidates that they do, and to ignore those reasons is to do everyone a disservice.

Lots of intelligent, sophisticated reasoning has gone into most women's voting decisions in this election. There is a lot at stake regarding the 2016 presidency, and many people of all genders have thought long and hard about how they can make the biggest impact. So, I spoke with eight women about why they support their candidates of choice during the 2016 primaries. Regardless of what candidate they've chosen, what's clear is that their thinking cannot be flattened to "voting with their vaginas" or wondering "where are the boys?"

"I voted for Hillary. I think she is thoughtful, pragmatic and the type of leader who will look at the details, not overlook them and foist them onto others. This is what we need to move our country forward. I believe she will also pay attention to issues of equality affecting women in the workplace, at home, and of course, financially. I think Hillary has a body of work befitting her years. She has earned her place at the table."

"I voted for Bernie in the Virginia Democratic primary because while I love Hillary and always have (and still do), Bernie inspired me. He does what a representative was created to do — he listens. When the Black Lives Matter protestors interrupted him, he gave up his podium to let them speak then sat down to talk with them, acknowledging that he needed to be more aware of their concerns. He doesn’t just pander to different groups. He hires staffers to specifically address their concerns. To me, he is trustworthy because he stands for the same things now that he always stood for — even in the past, when those things were even more controversial. He has been an unshakeable force as an elected official, and his combination of experience in office and real, demonstrable representation won my vote."

"I voted for Senator Bernie Sanders. I voted for him because I feel that he is the candidate most in line with my ideals and that he has been the most consistent of all the candidates re: his positions on things. However, I plan on voting for Secretary Hillary Clinton in the general if she ends up being the nominee. Too much is at stake for me to do otherwise."

"I voted for Hillary Clinton because I believe she is has realistic solutions to the domestic issues we are facing today. Also, she has foreign policy knowledge and experience that will help us work better with our allies to solve tough issues on a global scale."

"I'm a lifelong Democrat with student loan and medical debt, so naturally, Bernie Sanders piqued my interest at the start of this election season. I even donated to his campaign. However, as months have passed, Bernie Sanders has failed to convince me that he would be able to achieve, as President, the goals he's laid out in his candidacy. His approach to universal health care and education is simplistic and, upon scrutiny, underestimates the cost of these endeavors. In debates against Hillary Clinton, Sanders has been weak on foreign policy and appeared unprepared to answer questions that require complex, considered answers.

"I trust Hillary Clinton. Her unique and extensive political experience is unmatched by any candidate in this election. On every issue, she holds a well-reasoned, thoughtful position. To those who don't consider her to be 'progressive' enough: a true progressive knows that at the end of the day, politicians must work together to find reasonable solutions. That's what I believe Hillary Clinton will do as President."

"I voted for Bernie Sanders. Before my vote, I did a bit of research on him and realized that the 'fantasies' that he has for this country are worth it. He is criticized for having unattainable dreams, but his progressiveness will bring change regardless of the pushback. It wasn't until after my vote that I solidified that Bernie is the only reasonable vote, as Hillary feeds us lies with the assumption that she will just get away with it. As a progressive feminist, a vote for a woman president would be ideal. But a vote for Hillary goes against almost all intersectional feminist values. And hey, an old Jewish man full of love and big dreams is way more radical than a white woman full of lies and a cold heart."

"I'm voting for Bernie Sanders because, more than any other candidate, he will take radical steps to combat socioeconomic and racial injustice and climate change. I'm from a working-class family, and the actions he's taken to help the working poor resonate with me. I'm a Democrat through and through and I want a liberal in the White House, but since 2000, it seems that the more powerful Democrats don't fight for the working poor. Rather, they fight to keep themselves and other Dems in office. Bernie Sanders, a democratic SOCIALIST, is flipping that dynamic, and the marginalized lower and middle classes are ignited by his words and deeds. I love being here on Earth at this moment in time. No matter the outcome of his campaign, I have been inspired to become involved in social justice work, just as I was while in college."

"I voted for Hillary in the primary and will vote for her again if I get the chance. First, I am a Democrat to the core. Second, I truly believe she is most qualified to do this very difficult role based on her experience, her ideas, and her temperament. Third, I am dying to have a woman president (but would only vote for a qualified one, not for just any woman, and I believe she is qualified). Finally, I am very turned off by Bernie's (in my opinion) very male yelling and finger wagging and putting H. down. I feel like I've seen just about a lifetime of that, and I am not eager to see more of it."