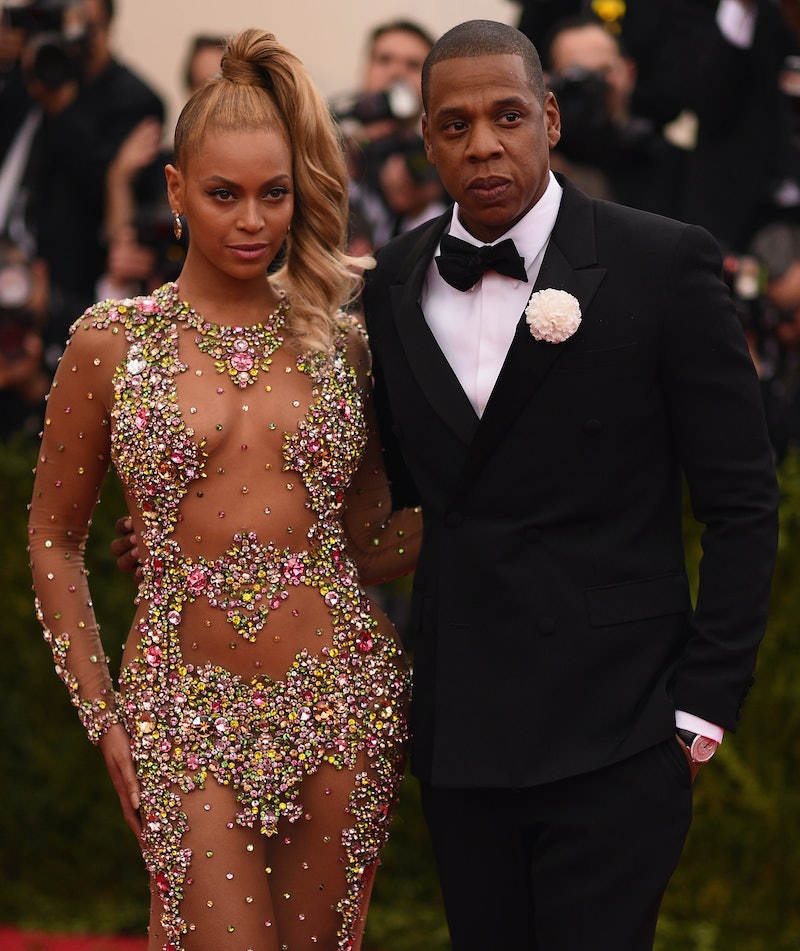 For Beyoncé fans, much of 2016 has been spent totally obsessing over the amazing music she's gifted us. Between releasing "Formation", performing at the Super Bowl in February, and dropping Lemonade in April, what else is there to talk about but Beyoncé? And with all of this happening now, it's making it even more important to remember something that happened in her past. Monday, May 2 marks the two-year anniversary of the time Solange Knowles attacked Jay Z in an elevator at a Met Gala after party, and now more than ever, what happened that night is relevant again. In this post-Lemonade world we're all living in, it's making me look at the incident in a completely different way — mostly because it seems like Bey's latest album has filled in so many of the gaps about her marriage that people have been wondering about since the event in 2014.

When the scuffle originally happened, it was all people could talk about. TMZ released the full video of Solange physically lashing out at Jay Z in the elevator until she was pulled off of him, but it didn't help answer any of the questions that were being raised at the time. It was a black and white, silent security camera video, and the reason why Solange was so upset was a total mystery.

Later, Solange, Jay Z, and Beyoncé released a joint statement in which Solange and Jay Z both took responsibility for what happened, calling it a "private matter that has played out in the public." It wasn't long after that the three were hanging out and posing for a family photo with Tina Knowles, so whatever was going on was either resolved really quickly or the family wanted to make it look that way.

At the time, according to the rumor mill, the fight happened because Solange reportedly found out that Jay Z was allegedly cheating on Beyoncé and wanted to stand up for her sister, and a divorce seemed almost imminent. But that summer, Beyoncé and Jay Z embarked on their sold out On The Run Tour, and Jay Z joined Bey onstage when she was honored with the MTV Video Vanguard Award at that year's VMAs. By all appearances, they looked happy. So it was easy to forget the Met Gala thing ever happened, and although divorce rumors still continued to circulate, it seemed safe to assume that their marriage wasn't going anywhere... until now.

When the Lemonade visual album premiered on HBO in April (and then later dropped on Tidal and iTunes), those rumors came right back — and worse than ever. Anyone who's seen the videos and listened to the lyrics knows it's heavily insinuated that Jay Z betrayed Beyoncé with another woman, and the album seems to cover everything from what she felt when she found out he was cheating to her ultimate choice to forgive him. Of course, there are other theories — for instance, that the story Lemonade is telling could actually be about Tina Knowles' relationship with Beyoncé's father, Mathew — but this seems to be the most obvious explanation.

But Lemonade definitely seems to have shed new light on what could have gone down in the Met Gala, despite the fact that nothing has ever been confirmed. In 2014, it was at least somewhat plausible to think that what happened in that elevator could have just been a family argument, but now it's impossible to look at the incident and not think about the cheating rumors and Lemonade. And if the reports that ran at the time are to be believed, it's totally possible that Solange really did confront Rachel Roy at the Gala and lashed out at Jay Z afterward. In fact, it even seems possible that the story Lemonade is telling started at the 2014 Met Gala and brings us to today, and it's crazy to think about hearing the range of emotions Beyoncé experienced between then and now.

It's even crazier to think of Beyoncé's reach, because she's one of the most mysterious celebrities in this age of Twitter oversharing... but she's also so willing to bravely put it all out there emotionally in an album like Lemonade. She rarely posts to social media, she's generally very private, and unlike stars who are an open book, like Kim Kardashian, what's going on in her personal life is usually anyone's guess. So the fact that lyrics she sprung on us in Lemonade could bring new meaning to an event like what happened when there was "a billion dollars in an elevator" in 2014 makes the mystique of Beyoncé that much more amazing.

So, what's next? Hopefully, Jay Z and Beyoncé will be in attendance at the 2016 Met Gala, and prove that for once and for all — no matter what may have happened in their past, and no matter what truths Lemonade may or may not be telling — that they're still standing together. Maybe this time, something even more dramatic will happen. Or, more likely, they'll both show up looking ridiculously gorgeous, reassuring us all that our favorite Hollywood couple has made it another year. Either way, I'm ready for it, and all the music it may inspire.