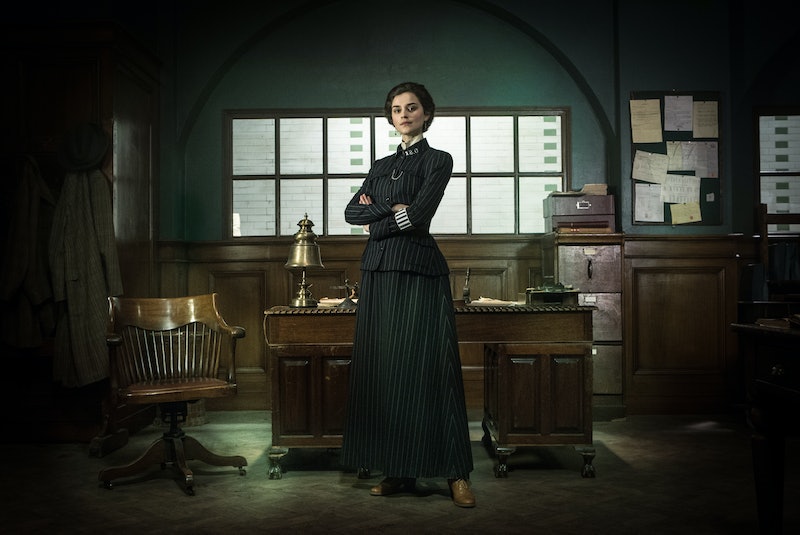 While Harry Houdini and Sir Arthur Conan Doyle are world famous, their partner on a new series isn't as well-known. Houdini & Doyle introduces Adelaide Stratton, a female constable for the Scotland Yard in 1901 London, assigned to supervising the magician and the Sherlock Holmes author when they decide to investigate a supernatural murder in the May 2 premiere episode, "The Maggie's Redress." And the way this female police officer is treated on the show by the men in her profession is just as you'd expect for 1901 — without much respect. Throughout the series premiere, Adelaide highlights the obstacles women have faced throughout history in careers that had traditionally been held only by men.

I would love to have an Adelaide origin episode, but the series starts with her already being a police officer. Her desk is in the basement and most of her duties entail doing paperwork or fetching tea for her male coworkers. Her boss at Scotland Yard, Horace Merring, is annoyed by Houdini and Doyle wanting to be involved in the murder case of a nun where a witness claimed to have seen a ghost at the scene of the crime. He orders Adelaide to pretty much babysit the two notable figures, a task he wouldn't have deemed worthy for any of the male police officers to do.

Adelaide realizes that helping Doyle and Houdini is a big break for her and she makes the most of her time on a crime scene, assisting Doyle in his investigations of the paranormal and doing her own sleuthing to solve who actually committed the murder. She's more willing to consider the possibility of the mystical than Houdini, but not at the risk of forsaking her police work. And while she may not be respected by the other police officers, Doyle and Houdini are quick to support Adelaide. They recognize that she's a skilled detective (especially after she helps save them from a watery death), with Doyle even using his clout to keep her involved in the case for longer.

The end of the premiere episode showed Adelaide's desk at Scotland Yard being moved to the upstairs and while that moment was a career victory for her, Merring quickly put her in her place. Since Houdini had sung Adelaide's praises to him, Merring assumes that she must be having an affair with the famous escape artist — because obviously no woman could actually be considered competent at police work and she must be using her feminine wiles to manipulate Houdini.

Amazingly, Adelaide isn't crestfallen by this accusation from her chauvinistic male boss — she actually appears to be empowered by it. As she alluded to with Doyle, Adelaide has had to fight to get to where she is now and she's not going to let an unfounded rumor bring her down. Though this moment may not be based in real history, it's powerful nonetheless.

Actress Rebecca Liddiard, who portrays Adelaide, admitted that her character is more fictional than the characters of Houdini or Doyle, saying during a press event, "This character is a little more fiction than accurate." But her inclusion on the series not only offers an important female voice and perspective, but also gives modern audiences a glimpse of the type of trials that pioneering women in the workplace had to experience. Although there is still a ways to go before sexism in the workplace is completely eradicated or women are truly treated as equals of their male colleagues, Adelaide's story shows how far women have come thanks to their perseverance like the kind she displayed.