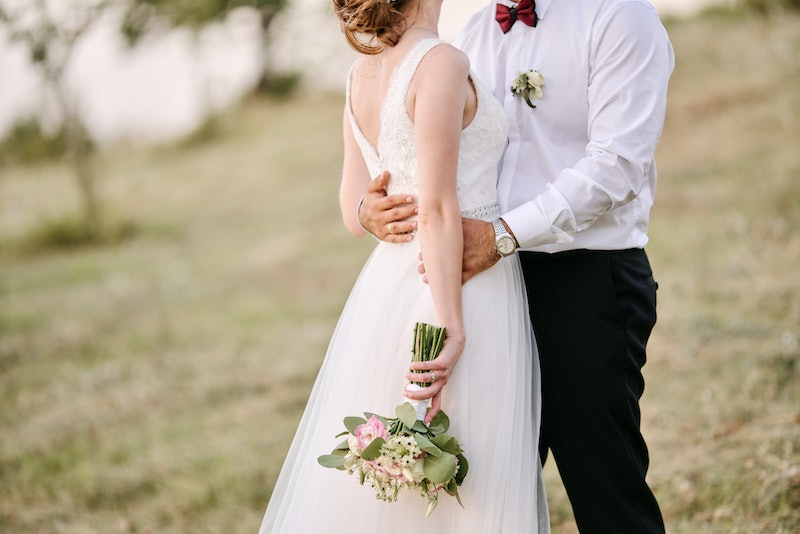 Most of the weddings I’ve witnessed in my life thus far have involved people in their 20s tying the knot. As I’ve been planning my own wedding as a 30-something, however, what’s repeatedly struck me — perhaps somewhat unexpectedly, but then again, perhaps not — is how different getting married in your 30s vs. your 20s can be. It’s not necessarily about the length of the relationship; obviously some couples in their 20s might have been together for years, while some couples in their 30s may have been together for a comparatively shorter amount of time, so age doesn't actually say as much about a relationship as you might think. More than anything else, though, it’s about the stage in your life at which both you and your partner might be. We change and grow over time (or at least, one hopes we do), and as a result, what “getting married” means to you during your 20s might not be at all the same as what it means to you a decade later.

It's true that some of the differences I’ve observed throughout the whole planning process can be chalked up to the fact that, y’know, everyone is unique, so everyone has the right wedding for them; however, it’s also true that many of them do result from the difference in age. Because you’re at a different point in your life in your 30s than you are in your 20s, naturally you approach things from a different angle — including weddings and marriage. Some things that used to matter a ton to you might not matter as much anymore, while other things you may not have been at all concerned with before suddenly carry much more weight.

None of this is to say that either situation is “better” than the other; they’re just like proverbial apples and oranges: The basic shape is the same, but the details aren’t — and they're not supposed to be. Nor do you have to compare the situations at all. But if you’re in a similar boat to the one I’m in right now, you might be finding the juxtaposition kind of interesting. Here are five of the most significant ways I’ve noticed the processes of planning a wedding and getting married are different when you're in your 30s vs. your 20s.

1. What You Want Out Of Your Wedding May Have Changed

There was probably a point in time during which I wanted the kind of wedding that comes to mind for most people when they think of the word “wedding”: Some kind of big to-do with a DJ and dancing and bouquet tossing and all that. (This may or may not have been at the height of my obsession with Say Yes to the Dress.) Now, though, I can’t think of anything I’d want less. Obviously this is just one example; maybe, conversely, you always thought you wanted a small wedding or to elope, but now that you’re a little older (and probably more secure, financially speaking), a big wedding is really appealing to you. Either way — or any of the innumerable other ways people might choose to celebrate getting married — what you want out of your wedding may have evolved somewhere between those two decades. Remember that whole thing where we change and grow with time? This is a pretty solid indication of that principle in action.

2. The Name Debate Has An Additional Layer To It

Whether or not you change your name when you get married is an intensely personal decision; everyone has their own reasons for whatever choice they make, and every single one of those reasons is totally valid. I would argue, though, certain factors carry a little more weight in the decision when you’re making the choice in your 30s vs. your 20s — one of the biggest of which is your career. By the time you’re in your 30s, odds are you’ve been working under your name for a pretty substantial portion of time — and if your name is your brand, then rebranding yourself when you’re already established can be a little more complicated than if you’re more like a start-up, metaphorically speaking.

Everyone’s got their own answer to the conundrum, of course. Maybe you keep working under your old name and use your new name everywhere else; maybe you keep your own name and don’t worry about it; maybe you go ahead and do all the legwork required to change your name both publicly and privately; maybe your partner changes their name; maybe you both change your name; or maybe you do something else entirely. But the longer you’ve had your name, the more it tends to matter — no matter what choice you ultimately end up making. Food for thought.

3. Your Registry Serves A Different Purpose

Most of us spend our 20s in apartments full of cobbled-together bits and pieces — hand-me-down furniture, odd sets of dishes, towels we’ve had since college, and so on and so forth. By 30, though, you’re likely to have invested in at least a few things for your home that are meant to last: A really fantastic couch, a good set of sheets or towels, a high quality gadget or kitchen appliance, or whatever else you consider important to the comfort of your daily life. Whatever it is, though, it’s A) probably something that would normally go on a registry, and therefore B) something you don’t need to put on your registry. Heck, maybe you don’t actually need much in the way of things at all — and maybe you don’t even want any of the things that registries usually take care of, anyway.

That’s where my partner and I are at right now: There isn’t really a lot of stuff that we need for our home; furthermore, the small handful of things we would like to swap out for upgrades eventually, we can afford to do ourselves—a privilege afforded by the fact that we’re both financially sound with well-established careers. We don’t need our registry to function as the “jump start your life together” kind of thing it’s traditionally meant to be — so we’re thinking about the whole thing a little differently. We’re looking into alternative registries: Honeyfund, for example, which allows people to kick a few bucks into your honeymoon fund, and Merci Registry, which lets you include everything from actual items to funds for activities or travel.

I still maintain that gifts are entirely optional — they’re nice to get, but not something anyone is ever simply entitled to, even if they’re getting married — but if your friends and loved ones are generous enough to want to gift you and your partner with a little something to celebrate your marriage, alternatives to the traditional registry are nice options to have.

No matter how close you are with your high school and college friends while you’re in deep in the throes of your educational years, odds are you’re going to fall out of touch with at least some of them after you graduate. You’ll also meet new people you’ll become fast friends with, whether it’s through work, friends of friends, activities you do in your spare time, and so much more. Don’t get me wrong — I think school is great, and I adored my time in college and graduate school. But school can also be an incredibly insular world, and once you finally leave it, you realize just how much space there is to explore. Your wedding guest list will always consist of the people you’re closest with; who those people are, though, might evolve between your 20s and 30s.

5. You Might Feel Less Pressure To Have The “Perfect Wedding”

That’s certainly how it went for me. I am very Type A, and generally I do not do anything by halves; as such, if I were planning the wedding I’m planning now about a decade ago, I probably would have put the same sort of pressure on myself to make sure everything was “perfect” that I do with regards to… well, pretty much everything I do in life. I think, though, that with a few more years on me, it’s been much easier for me to approach the whole wedding thing from the following viewpoint: The important thing is that this awesome fella and I end up married by the end of the day; everything else is just set dressing. It’s fun set dressing, to be sure — but there’s no need for it to be perfect. As long the right paperwork gets filed and everyone has a good time while it happens, that’s good enough for me.