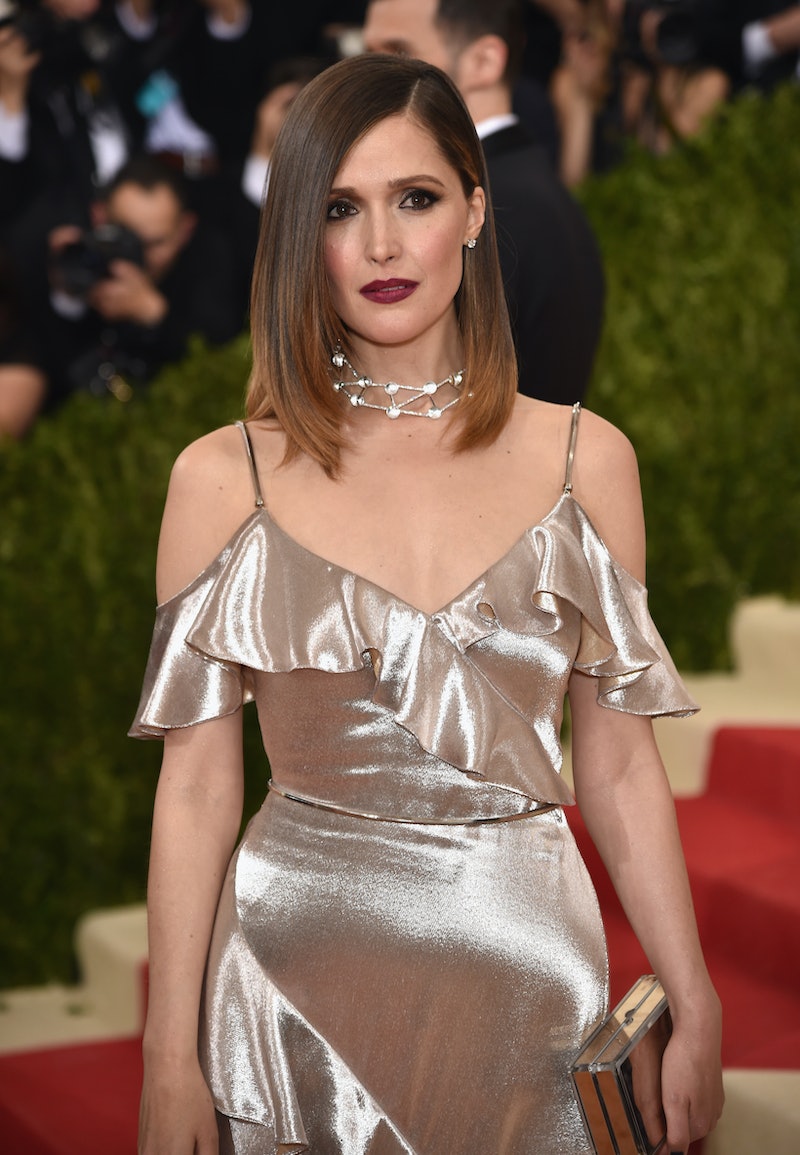 Rose Byrne is a member of what I like to refer to as the graduating class of Bridesmaids. Nearly all of the actors who starred in Paul Feig's 2011 comedy have gone on to become powerhouse women in comedy, winning acclaim and awards for their hugely successful works. Melissa McCarthy's career has exploded, as has her Ghostbuster s costar Kristen Wiig's. Meanwhile, Wendi McLendon-Covey and Ellie Kemper are TV stars with The Goldbergs and Unbreakable Kimmy Schmidt, respectively, and Rebel Wilson and Maya Rudolph are killing it in all areas. But for all of these stars' successes, there are still lingering ideas in Hollywood that women aren't funny, that they can't carry films, and that if a female-led film does succeed, it's a fluke, not the norm. Speaking to Bustle, Byrne, the star of May's Neighbors 2 , says she's all too aware of this frustrating truth.

"I think it still has a ways to go," the actor says. "But at least people are talking about it and it's being addressed as this inherent sexism within the business."

Byrne points to several women in Hollywood who've taken it upon themselves to write or produce female-led projects they feel strongly about: Kay Cannon, writer and producer of 30 Rock and the Pitch Perfect films; stand-up comedian Whitney Cummings; and of course, Tina Fey and Amy Poehler. "There are so many," Byrne says about women in comedy she admires. "I find that inspiring. And yet it's important to just to keep all that momentum going."

Right now, Byrne is busy promoting her own great role, that of Kelly Radnor in Neighbors 2 , the sequel to the 2014 parents-vs-frat comedy starring Seth Rogen and Zac Efron. This time around, Rogen and Byrne's characters are up against a sorority instead of a fraternity, and the antics lead to a bawdy comedy with hilarious, flawed, and empowered women at its center. Meanwhile, Byrne is also busy working behind-the-scenes, having started her own production company, The Dollhouse Collective, in 2015. The company is run completely by women, and Byrne says she's currently "trying to get a project up and running," so hopefully, fans will get to see Dollhouse's contributions soon.

With Byrne keeping busy as an actor and producer, it's natural to wonder if taking on directing is next in her docket. And when I ask the star if she'd ever consider making a film herself, she doesn't immediately cast the idea aside. Instead, she says, "Not so much, but yeah you never know... Maybe down the line, [I'd like] to write or direct, but at the moment I'm just trying to force myself to realize where my head is at."

One big thing taking up a lot of her attention? Parenthood. In February, Byrne gave birth to son Rocco, her child with actor Bobby Cannavale, and the new parent is "a little tired," she reveals. She adds, though, that life is imitating art in an amusing way. "It's funny, there's a scene in the first [Neighbors] where we're trying to get out of the house with the little kid and it takes us forever," Byrne says. "That's literally what happens every time I try and leave the house. It's like, 45 minutes. By the time I'm ready to go, I'm exhausted." But as Neighbors 2 shows, she's clearly not too exhausted to keep making audiences laugh.