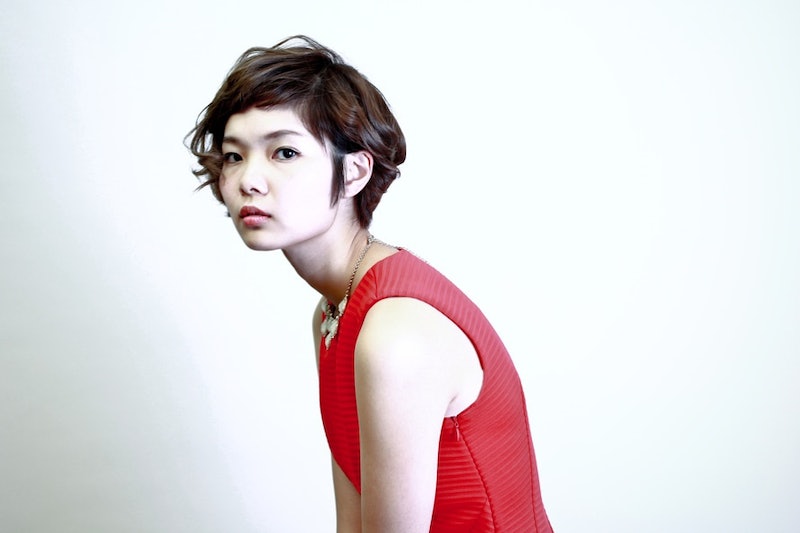 We’re always hearing that we could be having better sex, a better orgasm, or a better relationship. But how often do we hear the nitty-gritty of how we can actually better understand our deepest desires and most embarrassing questions? Bustle has enlisted Vanessa Marin, a sex therapist, to help us out with the details. No gender, sexual orientation, or question is off limits, and all questions remain anonymous. Now, onto today's topic: tips for losing your virginity to a woman when you've only slept with men.

Q: “I’m a 23 year old woman exploring my bi-curiosity. I've only ever made out with a girl. It's happened a few times, but I can never seem to get beyond that, even though I really want to. When I go on dates, I feel like I need to disclose my lack of experience, but I'm afraid other women will just write me off as a straight girl if I put it on my profile or say it too early on. How do I finally have experience without just sleeping with anyone, and how do I talk to dates about this?”

1. Remember: No One Wants To Be An Experiment Or A Phase

I’m not sure how many dates you’ve been on or how hard you’re trying to lose your virginity, but let’s start off talking about why you might not have had any success yet. I can’t speak with any certainty about the motivations of the women you’re dating, but I can tell you that one particular dynamic that can come up with women who sleep with women is a desire to not be seen as an “experiment.” Some women take offense to the idea of being something you’re just “trying on for size.” I once had a female client who took another woman’s lady-virginity. While they were still in bed, the other woman said, “yeah, so I’m definitely not into this.” Super hurtful, right? I’m not saying that you are viewing this as an experiment or a phase, just that it’s a point of sensitivity.

It’s important for you to be careful with your language when you’re describing what you’re looking for. Make it clear that you’re genuinely interested in the particular woman you’re dating, not just in the idea of trying something new. It’s perfectly fine for you to experiment with and be curious about your sexuality, but remember to treat each person you encounter with kindness and respect.

Piggybacking off of the above, there is a chance you may experience biphobia. Biphobia is often based around a stereotype that bisexual people view their sexuality as a “phase,” or even that they’re just doing it to get attention, or because they're “selfish” and “greedy.” They’re sometimes thought of as being more likely to cheat. Sometimes, there’s even pressure on bisexual people to “pick a side.”

Some of the women you’re going on dates with might be hesitant to date you because they’ve fallen for some of these inaccurate stereotypes about bisexuals. It sucks that they exist in the first place, and it shouldn’t be on you to try to prove yourself worthy. Biphobia is an unfortunate reality, but if you encounter it, it is a good way to gauge whether someone is even worthy of your time in the first place.

At the heart of your question is the topic of whether or not you should tell someone that you’re a virgin. There are tons of different opinions about this, but since you wrote in to this column, I’ll give you mine: yes, you should. Personally, I think it’s a big deal to be with someone having sex for the first time, and I think a lot of people feel the same way. There’s nothing to be ashamed or embarrassed of about being a virgin with women, but I do think it’s a piece of information your partner deserves to know.

Of course, this is ultimately your decision to make. If you’ve previously lost your virginity to a man, that might be a great way to think about what you should do here. Did you tell the guy you were with that it was your first time, or did you keep it a secret? How did that decision impact the experience? Is it something you’d want to repeat, or something you’d want to change completely?

Here’s the other tricky piece of the puzzle: if you do decide to tell a potential partner that you’re a virgin, when should you share the info? I think it’s best to hold off for a few dates. This is a personal piece of information about yourself, and I don’t think you should rush into sharing it with everyone you meet. Again, there’s nothing to be embarrassed about. It’s not like you’re admitting to being a serial killer or animal abuser — but it’s still personal. Plus, I’m sure you’ll go on plenty of first dates with people you don’t end up wanting to sleep with.

My advice? Wait until you feel like there’s the potential that you’ll actually want to sleep with that person. I’d also recommend waiting until you’ve at least made out with her too. Give yourself a couple more dates for things to slowly start getting hotter and heavier (in other words, don’t think you need to jump right into sleeping with someone). As you’re saying goodnight, break away from a kiss and say, “hey, I’m having a lot of fun with you, and I want to keep spending time with you. I wanted you to know that I’m a virgin, and I hope that’s cool with you.” Then go your separate ways and give your date the opportunity to think about whether or not she feels comfortable being the one to take your virginity.

5. Know That Putting All Your Cards On The Table In The Beginning Is Also An Option

Alternatively, if you're worried about leading someone on who might not be interested in taking your v-card, another option is to just be upfront about what you’re looking for. Try posting an online ad that says something along the lines of, “I’ve never been with a woman before, and I’m looking for someone to show me the ropes. I’m a respectful learner, I promise!” (be careful if you do this), or put that description in your bio on a dating app. Yes, some women will write you off if you do this, but those are women who would probably write you off in person too. Plus, there are definitely ladies out there who like the thrill of teaching someone new. It really doesn’t hurt to put it out there.

6. Try Not To Take It Personally If You Get Rejected

You’re bound to meet some women who don’t want to sleep with you because you’re a virgin. I know it’s hard not to take that personally, but keep in mind that it’s usually not. Most people feel uncomfortable with the notion of taking someone's virginity itself. It’s more about the general idea of being someone’s first than it is about specifically being your first. If someone turns you down, try to keep your chin up.

After having a few failed attempts to get past first base, you might be feeling increasingly desperate for someone to sleep with. A lot of people are in a rush to lose their virginity. But I want to encourage you to take your time and maintain your standards. Don’t rush or pressure yourself. I know it can be frustrating, but wait to find someone that you genuinely like. She’s out there, I promise!