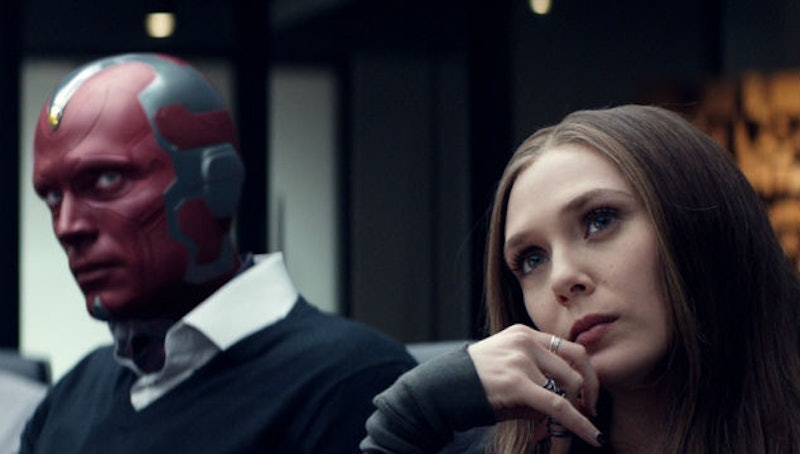 The biggest opening weekend at the box office for 2016 belongs to the biggest movie Marvel Studios has ever produced, Captain America: Civil War. The film has loads of impressive action sequences, is bursting with quality humor at every turn, and yes, even features a romantic storyline or two. And without question, the one that's getting the most buzz is the relationship between Scarlet Witch and Vision. Although nothing romantic happens between the two Avengers in the movie per se, they are awkwardly flirty with one another with a lot of chemistry, and the seeds are certainly sewn for them to become a couple down the line. But should they?

The argument against their coupling has to do with the MCU's girlfriend problem. Basically, every female Avenger is romantically involved with someone else on the team. Black Widow had her highly-criticized romance with the Hulk in Age of Ultron. The Wasp will surely be joining the team once she makes her debut, and when she does she'll already be linked to Ant-Man. And if you want to count Sharon Carter as an honorary Avenger, well, she's locked lips with Captain America. So having Scarlet Witch and Vision also hook up would seem to indicate that women can't join the Avengers without immediately falling in love with one of their male teammates. However, it's not that simple.

Vision and Scarlet Witch have a very unique relationship. Their story isn't your run-of-the-mill boy meets girl, they fall in love, and live happily ever after plot (looking at you, Ant-Man). Rather, the chemistry between them stems from the fact that both of them are outcasts, misunderstood by essentially everyone in the world until they find each other. Scarlet Witch is immensely powerful, which makes others, even her fellow Avengers, fearful of her. Vision, meanwhile, isn't even human. He's a synthezoid who is trying to figure out what that means, while also trying to determine just how much humanity he possesses.

The pair also have a long and complicated history together in the comics, and really, it's impossible to tell the story of one of them without involving the other. They get married, have children, and then their lives fall apart after a series of increasingly insane events. I wouldn't say it's a happy story, but it's certainly an interesting one, and quite possibly the most original romance in all of comics.

So if the movies decide to pursue the relationship between Vision and Scarlet Witch in this manner, that is, telling the complicated story of two lost souls who somehow find solace in one another against all odds while raising all kinds of philosophical questions about what it means to be human and the true definition of love, then I'm all for it. But if the movie merely has the two of them date just to make sure there are no single women in the Avengers, then that's something I can't get behind. But judging from what I've seen so far in Civil War , it would appear that Marvel is leaning toward the former.