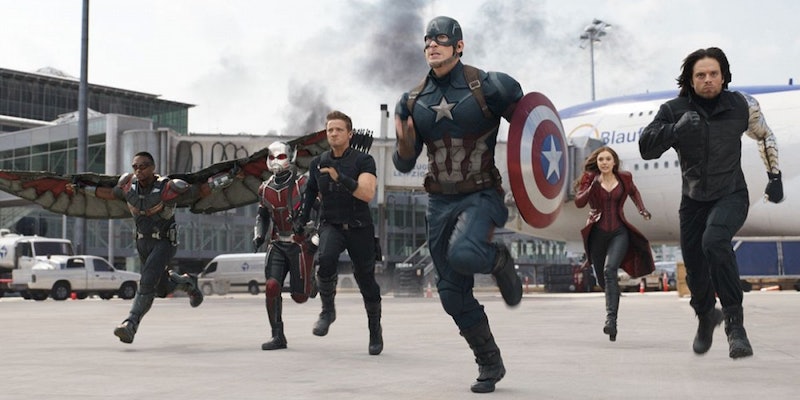 Before Captain America: Civil War came out, it was generally accepted among fans that this would be the film where stuff got real in the Marvel Cinematic Universe. The movie promised a literal war between the Avengers, with heroes turning against each other in what looked to be a vicious battle to the death. The trailers teased the death of War Machine, absolutely brutal brawls between Captain America and Iron Man that suggested one of them wouldn't make it out alive, and a general sense of doom. But then the movie came out, and almost no one dies in Civil War . So what gives?

Only three characters of note perish in Civil War. Villain Crossbones blows himself up near the beginning of the film in what is surprisingly the movie's most violent moment; and helps kickstart the Sokovia Accords in the process. Then Peggy Carter dies (off-screen, mind you), and Sharon Carter's eulogy at her funeral serves to remind Steve Rogers not to budge on his stance against the Accords. The final death, which still occurs pretty early in the film, is that of the Wakandan King, T'Chaka, who perishes during a terrorist attack on the Accords ratification, dragging his son T'Challa, AKA Black Panther, into the conflict. So these deaths, although minor, certainly serve a purpose. But still, you can't deny that the impact of an Avenger dying would have have been much greater.

The fact that no one of tremendous importance died in Civil War speaks to what some fans consider an issue within the Marvel Cinematic Universe. That is, with entire phases of movies announced at once, there is little suspense that anything major will happen in the meantime. Marvel's Phase Three, which began with Civil War and will end with Avengers: Infinity War - Part 2 in 2019, was announced two years ago. By showing its cards (that is, revealing exactly when Thanos would be going up against the entire Marvel Cinematic Universe) five years in advance, Marvel takes some of the suspense out of the franchise. If everyone's going to be needed to fight Thanos, then surely no one is going to die before it's time to face him.

Civil War had a chance to change that expectation by killing off a major character, thus revealing that anything really could happen in the lead up to Infinity War. But since that didn't happen, I find it hard to believe that anyone is going to die before Thanos starts causing trouble. Think about it, if everyone survived the supposedly high stakes of Civil War, then does anyone really face any risk of dying in Guardians of the Galaxy Volume 2? Or in Ant-Man and the Wasp? Thor: Ragnarok may borrow its title from an end of the world myth, but I can guarantee that both Thor and Hulk will survive whatever chaos the film throws at them and be in tip-top shape to take on Thanos in Infinity War.

Maybe I'm wrong and heroes are going to start dropping like flies starting in next year's Spider-Man: Homecoming, but it sure seems like if an Avenger were going to die, Civil War would have been the prime spot for them to meet their end. And since no one did, I'll be looking forward to seeing them all in 2018 at the reunion, err, in Avengers: Infinity War - Part 1. Maybe by then the stakes will be for real.