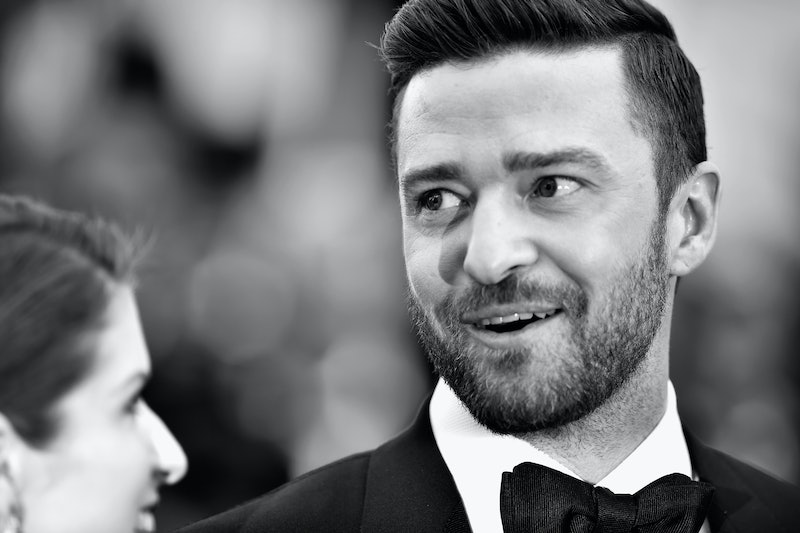 Justin Timberlake is a special guy. He's a Living Boy Band legend who still is making great music. He managed to move on from that awful Ramen noodle hair. He's even a dad! But does he fulfill the true celeb criteria of being the social medias? Though the former *NSYNC does have Instagram and Twitter, unfortunately, Justin Timberlake doesn't use Snapchat, which is a shame, because in another life, JT could have been a comedian. After all, he's a member of the elite Saturday Night Live Five-Timers Club. Maybe he will get a Snapchat when he isn't so dang busy (please, dude).

Right now, Timbers is in full dad mode, and thus a little too busy for Snapchat. (Did you ever think that the man with the notorious denim tuxedo-plus-cowboy hat ensemble would be raising a family?) He's also a wee bit busy showering his wife, Jessica Biel, with love. In an Instagram post on Mother's Day, he called her a "MILF" (true), and gave a cute shoutout to all the other moms out there. He is literally the dude you want to bring home to Mom. He's also wearing the hell out of a tuxedo (not denim) at the Cannes Film Festival right now, and he's performing at Eurovision Saturday, May 14. (I mean, that'd be a great place to Snap from, but I get it.)

But honestly, his Instagram might be enough. JT knows how to post a #TBT, including a few recent highlights such as: memories of working with Pharrell, hanging out with Taylor Swift, hanging out with his adorable son Silas Randall Timberlake, and apparently, working very intensely on the music for his upcoming Dreamworks movie Trolls (a long overdue movie about Troll dolls). He's doing the main voice opposite the equally hilarious Anna Kendrick, so if you follow him on IG and Twitter, you'll get a ton of cute posts of them just goofin' while promoting the Trolls movie.

He's still funny on Instagram, but it is a little sad that he's not taking advantage of those Snapchat filters. What a wasted opportunity. Come on, Timberlake; even your buddy President Obama is snapchatting. But he's still participating in social media-savvy culture, delightfully celebrating the "It's Gonna Be May" meme that he inspired on Twitter at the end of April.

He also got down with a KitchenAid mixer (I hope this photo is his next album cover).

And he posted a wonderful tribute to Prince, because goddamn it, Timberlake is tender. (He once painted his girl's toenails in a music video, after all.)

This man is just primed and ready to start Snapping, but I guess I will settle for a compromise: Though I truly hope and pray that when Timberlake gets back from his jaunt in Europe he gets a Snapchat, I will let that go if he does release a new album in 2016. We went through seven long years between Future Sex/Love Sounds and The 20/20 Experience, which was released in all the way back in 2014. Give us music, Music Man! If not, at least give us the gift of you on Snapchat.