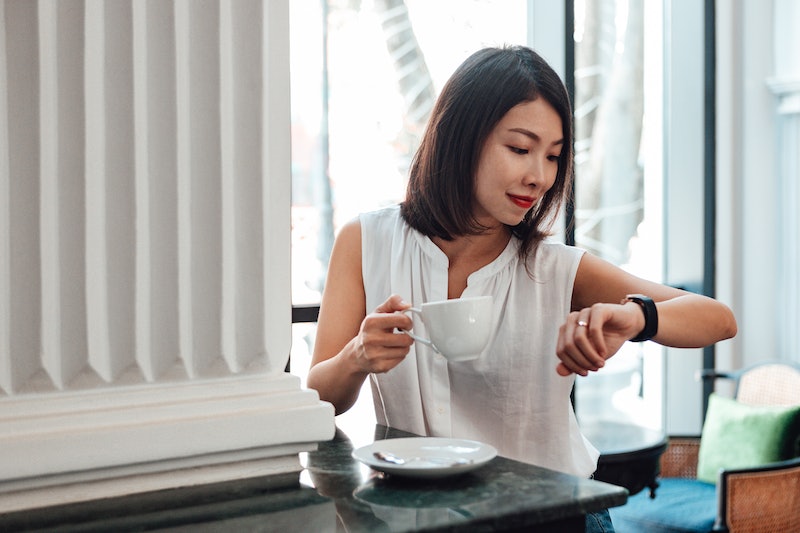 Let's be real: There are a lot of benefits to arriving places early. And I don't just mean that there are benefits to being on time, but that actually getting there even before what's consider to be "on time" is a thing people do. (I know, I know — my fellow people who are always late are shuddering at the thought.) Furthermore, it can pay off in some major ways: Arriving places early is generally viewed as a sign of respect, responsibility, and conscientiousness. If you arrive somewhere early, whether it's the workplace or a friend's birthday celebration, it communicates to others that you take the engagement seriously and that you're willing to prioritize the commitment in your life.

It's also a sign that you're reliable — if you regularly are early, it shows that you're likely prepared to handle worst case scenarios. I mean, hello, you took into account traffic you didn't even hit, didn't you? You'd probably be great to have around, just in case of a zombie apocalypse or some other crisis.

But why, exactly, are some people always early? Sure, it makes a good impression and can save stress in the long run, but how do people develop this habit? Is consistently being early even a habit in the first place, or is it something more innate or nature-driven? Ultimately (as with everything with psychology), the answer is going to vary a bit based on who you are and what your personal background is; one person's rationale for being early is likely going to be totally different from someone who comes from an entirely different set of experiences.

And that's OK! It's still fascinating to check out research on human nature to help us learn more about ourselves and those around us. Here are five science-backed reasons you're always early — and what we can learn from them:

1. Punctuality Was Drilled Into You During Childhood

Did your parents ever remind you that "If you're on time, you're late"? My grandparents told me this constantly (shocker: I was always just barely on time), and as a kid, I didn't get it: Technically I wasn't late, so what did it matter? It's often recommended that parents and other authority figures teach kids punctuality early; there can be a lot of benefits when it comes to school and measures of success later in life. Nishimoto Ikuko of Saitama University, for example, writes in the article, "Teaching Punctuality: Inside and Outside the Primary School" that children who learn the value of being on time in school are likely to be punctual in society in general, through teaching kids accountability, responsibility, and respect for others.

While it's true that Ikuko's article examines pucntuality in Japanese culture, which means that we can't necessarily draw the same conclusions for other cultures, being early can definitely still help even on a smaller, day-to-day scale: It gives you time to settle into your new environment, chit-chat with those around you, and be helpful to your hosts, coworkers, etc. Isn't it a great feeling when you arrive somewhere and you realize other people got the table ready, set up the technology, and even rounded up some snacks? Yeah, it's pretty awesome. However, it's also awesome to remember that people get these things done because they get there early.

2. You May Have Anxiety

It's true: Studies show that anxious people perceive the world around them differently, including the way they experience and understand time. Many psychologists believe that when people express anxiety about being late, they're actually experiencing anxiety about something else. For example, Alex Lickerman, MD, explains in an article for Psychology Today, "At some level, being late always triggers this question: am I creating the greatest amount of value with my life that I can? Will I feel, when it comes my time to die, that I spent too much of my time frivolously?"

Of course, not everyone thinks about their daily existence in terms of literal life and death, but it's important to step back and consider why you use your time the way that you do. Even though being early is generally considered to be a great habit to get into, digging a little deeper might help you see if it's the result of other anxieties happening in your life.

Sometimes being early is as simple as having a huge deal of respect for others. Perhaps it's because you're hoping for a promotion at work and want to impress your boss, or perhaps you know a certain friend needs some extra support and you want to show that you're available as a shoulder to cry on, but no matter the reason, when you show up places early, it's likely a sign you respect the time of others. At the end of the day, we all only have so many waking hours to work with, so when you devote time to someone else (especially extra time, even if it's only a few minutes), it sends the message that you prioritize them and respect them. Sometimes human goodness just naturally spurs us to be considerate of others, which is pretty awesome.

4. You Assume The Worst

On the flip side, sometimes being early can be a sign that you assume the worst. You know how when people are late, somtimes it's because they're optimistic? This is a real phenomenon: Studies actually show that when people are late, they might also be optimistic to the point that they assume things will just work out no matter what. Sure, they'll catch the bus on time, there will be no traffic, and there's no line to get tickets. Of course, this doesn't always work out, which is why some people are always late; it allows no margin for error. On the other hand, some people are always early because they're worried about the worst occurring. Maybe the worst is that you'll get stuck in traffic; maybe it's that the apocalypse is happening. Who knows? Better to get to your friend's birthday dinner early, either way, am I right?

5. You're A Natural Leader

Do your friends joke about how you're such a Type A personality and you love to be in control? If you're always early, it's possible you live for the thrill of figuring out the details and orchestrating the event, whether it's in the workplace or hanging out with friends. Getting places early means you might have time to get your opinion in there when it comes to finalizing plans or making sure everything is all set for the event to begin. If you're a natural leader, or just love being in leadership positions, it makes sense that you'd be weary to arrive late (or even simply on time) and risk losing the chance to express your opinion and offer a helping hand to those around you.