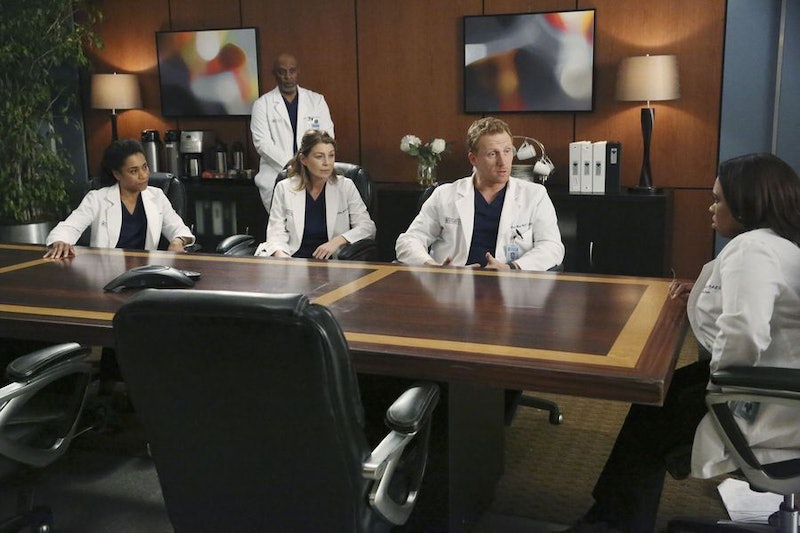 Over the past 12 years, the Grey's Anatomy cast has seen a whopping 28 series regulars. Some have been with us from the beginning, some were only with us for a season or two; some were promoted to the main cast after years of recurring apperances, others suddenly appeared in Grey Sloan Memorial Hospital as though they'd been dropped off on the helipad. As the Grey's Anatomy Season 12 finale approaches, a familiar question arises: will the revolving door of doctors rotate again? If so, which docs are on their way out? Who will be in Grey's Anatomy Season 13?

Only once in the past decade-plus of the show's history has the cast list remained exactly the same between two seasons. (Season 7 and 8, specifically.) Otherwise, the roster of main characters has been constantly evolving, shedding a few names —and typically adding even more — every year. Season 12 alone saw the addition of three new series regulars: Jason George, promoted from his recurring role as Benjamin Warren; Giacamo Gianniotti, promoted from his guest role as Andrew DeLuca; and Martin Henderson as Nathan Riggs, a brand new character this season. That brings the main cast list to a whopping 16 names… the largest the Grey's cast has ever been.

Will we be seeing a few doctors check out before Season 13? Here's what we know about who will be back next year:

There was a time about five years ago when it was technically possible to imagine Grey's Anatomy without Meredith Grey, when the mantle of title-character could have conceivably passed on to her younger sister; but that possibility died with Lexie Grey in Season 8's plane crash. Now there's no Grey's without Meredith — and if Sandra Oh could announce her departure early enough so the writers could craft her character a satisfying exit, then surely Pompeo would do the same if the day ever came that she wanted to call it quits. Pompeo is not technically confirmed for Season 13 yet, but let's be real: Meredith's not going anywhere.

According to TV Line, In June of 2015, actress Jessica Capshaw renewed her contract for another three seasons, which should mean Dr. Robbins will be sticking around through Season 14 at least (assuming the show is renewed again). Of course, as we know from Patrick Dempsey (whose character was killed off in Season 11 despite being contracted through Season 12), contracts aren't always ironclad; but they're all we have to go on for most of these people, so let's call Arizona safe for now.

Justin Chambers has been with us since Day One — and he isn't going anywhere anytime soon, either. Just a couple of months ago, the actor announced via Twitter that he would be remaining with the show for Season 13.

Kevin McKidd's contract is up at the end of Season 12, and although there has yet to be "official" word on its renewal, the actor said to TV Line in January of this year that he has no intention of giving up his steady job without a fight. "I don’t see any reason why it wouldn’t happen. I love [the show]," McKidd told TVLine. "Shondaland creates this environment where if you’re trusted and become part of the family then you’re given opportunities to thrive and grow. I don’t see any reason why I would run away from that. I feel very blessed.”

Of the nine series regulars in Season 1, Bailey is one of four still left on the show in Season 12 (including Meredith, Alex, and Richard); an impressive feat. After all this time, surely Bailey is important enough that her character would be given a worthy departure should Chandra Wilson decide to leave, rather than just disappearing between seasons.

About half of the cast's contracts are up for renewal between Seasons 12 and 13: Pompeo, Chambers, McKidd, Wilson, Sara Ramirez, and James Pickens, Jr., who plays former Chief Webber. Earlier this month, Entertainment Weekly reported that all of these actors were seeking raises from ABC — not an unreasonable demand considering that, even in its 12th year on the air, Grey's Anatomy is still the highest-rated scripted drama on the network, according to Zap2It. And why would Pickens, Jr. be asking for a raise if he was planning on leaving? Count on Richard for at least one more round.

Unfortunately, not all of the actors' contract renewal schedules are public knowledge. There's no way of knowing which of the following actors are renegotiating with the studio at this very moment, and which are already locked in for another season or two:

April and Jackson — who joined the show as recurring characters in Season 6 before being promoted to the main cast in Season 7 — are the characters in this category who have been on Grey's the longest. It's hard to imagine Sarah Drew leaving with no fanfare… unless tragedy is about to strike Kepner's second baby in the finale? (Please no.)

Shockingly, despite being divorced, April and Jackson are probably the couple that's acting the most mature right now. Some might even say that they're heading for a reconciliation. If Drew's not going anywhere, then neither is Jesse Williams.

Jo finally and officially turned down Alex's marriage proposal, so there is a possible door open for Camilla Luddington's exit if necessary. But, a popular fan theory claims that Jo said she "couldn't" marry Alex because she's actually already married… and if this turns out to be the case, then there's plenty of story left to explore for Jo next year.

Unless Kyle's tragic death hits Stephanie hard enough to make her quit medicine entirely (unlikely), we can probably expect to see Jerrika Hinton around next year.

My Spidey sense is tingling, and it's reminding me of the last time a season of Grey's Anatomy ended in a wedding. In Season 3, that supposed-to-be-happy occasion ended with one of the participants leaving the other at the altar — and walking off the show for good. Since we already know McKidd is sticking around, will Caterina Scorsone be the one to vanish? Unlikely, but you never know…

In the past few years, Meredith has lost her half-sister, her best friend, and her husband. Let's not take away her second newfound half-sister just yet, OK? There's probably plenty of juicy drama ahead as the sisters fight over Nathan Riggs, anyway. Kelly McCreary has been a delightful addition to the show and it would be a shame to lose her after only two years.

Is anyone else disappointed that the writers made Arizona and Andrew roommates and then never actually explored that dynamic? I mean, you could have scenes of Giacomo Gianniotti playing with adorable little Sofia! What a wasted opportunity. Hopefully the show will explore that more in Season 13. With only a couple of exceptions (Leah Murphy, Shane West), main interns tend to stick around for more than just a year, so Dr. DeLuca probably won't be checking out just yet.

Jason George recurred on the show for six years before finally being promoted to main cast in Season 12. With a cast this large, it's conceivable (if unlikely) that George might be bumped back down to recurring if they need to make room for some fresh blood. But it's hard to imagine Bailey's husband disappearing entirely, current marital spats notwithstanding.

The lingering question of the fate of Owen's sister has been the through-line of Riggs' character ever since his introduction earlier this season. Anyone who watches soaps knows that this is building towards some sort of revelation in the finale — likely that the presumed-dead sister is actually still alive. Season 13 will have to deal with the fall-out of that potential revelation, which means Martin Henderson would be here to stay.

Last month, Sara Ramirez sent a cryptic tweet that seemed to imply her time on Grey's Anatomy might be over. She was one of the actors listed by Entertainment Weekly as seeking a raise, so it's possible that negotiations between her and the studio didn't work out. If so, Callie's departure will be quite a blow; she's the character who has been on the show the longest outside of the Original Four, introduced in Season 2 before becoming main cast in Season 3. Things seemed primed for an exit when Callie was considering moving to New York City with Penny; but now that Callie has broken up with Penny and decided to remain in Seattle, her tenure on the show seems more secure — for now. UPDATE: Sara Ramirez has tweeted that she's "taking some welcome time off" from the show, so it seems we've seen the last of Callie — for now.

Additional Update: On Thursday, May 19, Sara Ramirez released a statement to US Weekly in which she confirmed that she would be departing the show. "I'm deeply grateful to have spent the last 10 years with my family at Grey's Anatomy and ABC, but for now I'm taking some welcome time off. Shonda's been so incredible to work for, and we will definitely continue our conversations! I send my love to Ellen [Pompeo], the rest of the cast and crew, and I look forward to always being a part of the Shondaland family!" Shonda Rhimes also added, "I will miss Callie tremendously, but am excited for what the future holds for Sara. She will always have a home at Shondaland."

Of course, it's not just a question of who will leave, but also who will join the main cast. It's rare that a season goes by without at least one new addition; although it's admittedly difficult to imagine anyone joining the 16-person cast unless someone else leaves first. Will someone be promoted from the recurring cast? (Samantha Sloyan as Penny undoubtedly had the largest presence this year, appearing in 19 of the season's 24 episodes; could she return full-time after her fellowship?) Will someone guest star in the finally before becoming a series regular next year, a la Addison Montgomery in the Season 1 finale? (Riggs' sister is the obvious candidate here.) Or will Season 13 add a new face or two that we've never seen before?

All of these options are on the table — we'll just have to wait and see which doctors are roaming the halls of Grey Sloan next fall to know for sure.