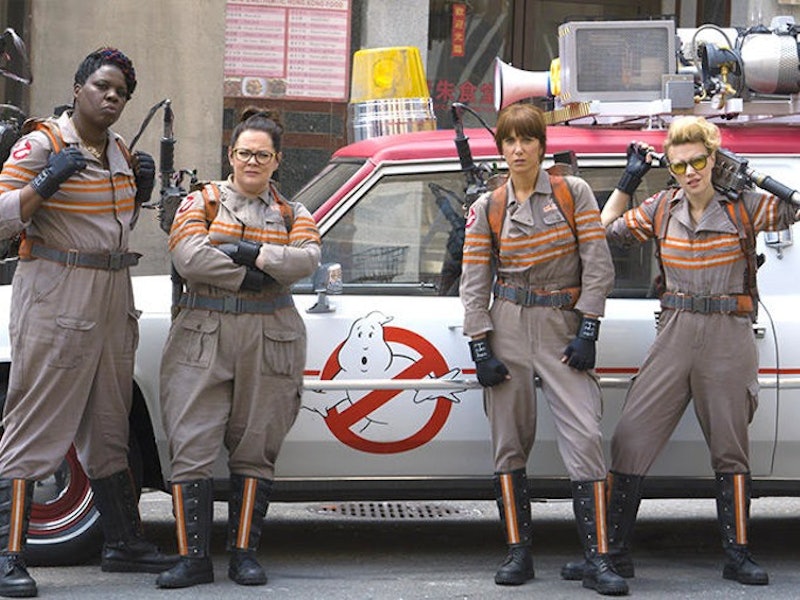 Another day, another awesome Ghostbusters trailer. The latest international Ghostbusters trailer has landed, and it's the best one yet. It uses a lot of the same footage as the previous trailers, but it also reveals new Ghostbusters goodness, including some laugh out loud character moments. Forget the haters, because this trailer has everything you could possibly want from a Ghostbusters reboot. There's Slimer, Chris Hemsworth being totally clueless, and all four of the Ghostbusters getting a moment of their own to shine. This trailer is hysterical and revealing — honestly, the only thing that would have made it better if it was also a time machine that could transport me to July 15 so I could watch the whole movie immediately.

The international trailer gets bonus points for emphasizing the team aspect of the movie. Instead of leaning into the visual gags, it goes all in on showing how Abby, Erin, Jillian, and Patty interact with each other. It's a sly, clever preview with some welcome subtlety and a nearly flawless introduction to the world these Ghostbusters inhabit. So, what's new this time around? I am so glad you asked, because the international trailer drops some major hints about who these women are and how they are going to save the world (and also why Kevin is going to be your new summer crush).

Adorable, dim Kevin apparently cannot remember the group's long, technical name so he just calls them the Ghostbusters when people call. It's a quick gag, and a hilarious origin story for the group's name.

As pevious trailers have shown, New York City will eventually break out the tanks to deal with the ghost invasion, but, early on, the media depicts the Ghostbusters as "sad, bored, sad, lonely women." I am guessing they will change their minds when the Ghostbusters are the only thing standing between them and an undead army.

Jillian's interests appear to include gadgets, blowing things up, and having her co-workers test out nuclear lasers because they "have the longest arms." She is weird and just a tad bit scary, which makes her an ideal person to have on your side while busting ghosts.

The Movie Is Going To Poke Fun At The Misogyny

The misogynistic reaction to the Ghostbusters reboot has been depressing, but the movie anticipated the hate. One of the best scenes in the trailer occurs when Kevin starts to give a big speech about how they have to come up with some way to save the world from ghosts before McCarthy's Abby cuts him off to explain "that is exactly what we do here." It's OK, Kevin, the women have got this one.

The Team Looks Epic Together

This trailer has so many shots of the team working together, and each one looks unbelievably cool. Seeing the way the team plays off of each other is fun, but there is something awe-inspiring about seeing them work as a cohesive group. They are at their strongest when they are together, and it is going to be so much fun watching them take down Slimer and his ghoulish friends.

Erin Is Totally Going To Be Your Fave...

While the other Ghostbusters have big personalities, Erin feels like the voice of reason. This is the first trailer where her personality as the cautious, but passionate member of the group truly shines through. She is the character you are going to identify with and who will likely go on the most significant hero's journey.

But Patty Will Make You Laugh The Hardest

Once again, Patty walks away with the trailer... and a giant ghost on her shoulders.