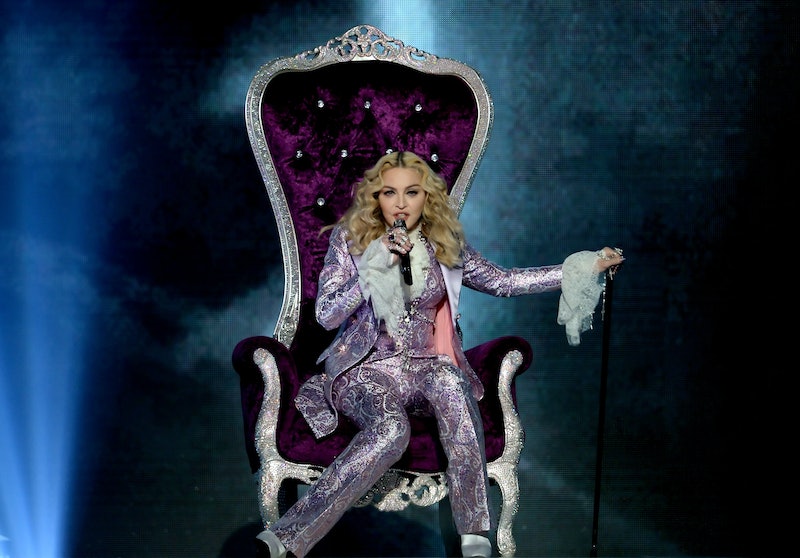 On the surface, the focus of the Billboard Music Awards is obviously music. The night celebrates some of the best artists and their work. But there was another common theme surrounding this year's show. Is it just me or did the 2016 BBMAs give off a major Alice In Wonderland vibe? It could be purely a coincidence — or maybe the Alice Through The Looking Glass ads during the commercial breaks went straight to my head. But, either way, this notable trend made the whole show rather whimsical. The only thing that would've made it better would be if Ludacris doubled as the Mad Hatter. (You know, instead of making awkward comments about Ciara.)

If you were too distracted by Britney Spears' pop medley and didn't pick up on this, that's totally OK. Allow me to round up all the instances throughout the night that contributed to this feeling. Honestly, it's not even a bad thing. Who doesn't want some fantasy thrown in with their music? To start out, Pink performed her song from the Alice soundtrack. As she sang "Just Like Fire," flames burst around her as she swung around a clock. Pink tends to include acrobatics in her performances, but it was still quite the spectacle — just like I imagine the movie itself will be.

When Madonna performed her Prince tribute, she sat atop a throne that felt very Queen of Hearts. (See the main image above.) Even her outfit looked like it could have been borrowed from the movie's costume department. Considering viewers on Twitter pointed out the same thing, I'm not the only one who drew the comparison.

Of course, I'm not trying to mock Madonna's moving performance. Just pointing out the similarity in wardrobe and set design. One final Alice In Wonderland similarity would have to be Ariana Grande almost falling on the red — I mean, pink — carpet. One of the most memorable parts of the story is when Alice falls down the rabbit hole. Grande's mini spill totally fits the theme, right?

Considering this was the Billboard Music Awards and not the Alice In Wonderland Awards, I'm going to guess it's purely coincidence that all of the above occurred. But of all the coincidences to happen, I must say it's a pretty fantastical one. All that was missing was the Cheshire Cat.