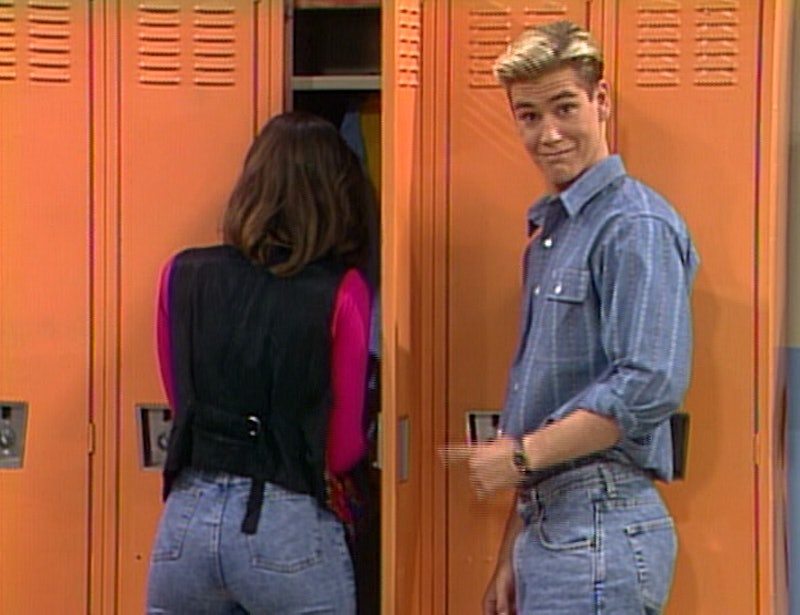 Rape culture is a complex topic and there's a good reason why it's still one that women are eager to talk about over 40 years since it was first addressed by the second wave of feminism. Evidence of rape culture can be found just about everywhere you'd hope it wouldn't be. It's in movies, TV shows, music videos, music, it's on the streets, it's in magazines, it's in books and on billboards — simply put, it's everywhere and it normalizes a treatment of women which is violent, dehumanizing and objectifying. Rape culture normalizes the act of rape by trivializing it, blaming the act on the victim, sexually objectifying women or by refusing to acknowledge that particular behaviors are harmful and can contribute to acts of sexual violence.

When rape culture is prolific in movies and TV shows, it can have a terrible impact on an audience, and is particularly toxic to younger minds who absorb even the most nuanced of messages or commentary from whatever content they may be enjoying. Back in the '90s, of course, many of us were youthfully enjoying some of our favorite shows, blissfully unaware that they may have been perpetuating ideas of rape culture. Sadly, there are more than a few problematic narratives within TV shows — and even entire TV shows themselves — which perpetuated ideas of rape culture. They didn't seem obvious back then, but they're pretty startling now.

Though she's obviously consented to the encounter, she's also depicted as being in physical pain throughout the sex session (and long after it); she endures it out of politeness. The character with which she has sex is also portrayed as a super nice guy who turns out to be a total douche when she later rejects any further sexual advances from him. This is something that rape culture has completely normalized: that once a woman has said yes to sex that she has in some way consented to everything else that happens to her, whether she enjoys it or not. For the record? That's totally not true.

Despite starring our favorite childhood crush, Jonathon Taylor Thomas, I think we can all agree that Home Improvement, like many '90s sitcoms, had its issues. Alongside its consistent set of "men are like this, but women are like that" jokes, Tim "The Toolman" Taylor's show within the show also happened to have a hot female sidekick (played, at one time, by Pamela Anderson) who was little more than an adorable, walking punchline.

The Tool Time hot girl was objectified beyond belief and reduced to little more than a prop for handing as many phallic tools as possible to the men running the show while saying things like "I didn't know it would be so big!" As such, Home Improvement perpetuated the idea that beautiful women existed simply to serve the male gaze. And that was a dangerous message to send out to an audience of young girls who had tuned in just to ogle JTT.

I love Twin Peaks, but many of the problems of the series are rooted in the fact that it straight-up perpetuated rape culture. From the corpse of Laura Palmer being found naked and wrapped in plastic to the way that the entire male population of the town appeared to be obsessively in with love her, Palmer's tragic story was told in most part by the men who "loved" her. As a result of this, the story presented to us as an audience painted a less than favorable portrait which blamed the wild teenager for her own death. Thankfully, Lynch appeared to recognize this problem himself and gave Palmer agency over her own story with the 1992 film Fire Walk With Me which restored some much-needed balance to the narrative.

4. Pacey Witter Hooks Up With His Teacher, Dawson's Creek

In the first season of Dawson's Creek, Pacey is portrayed as having an illicit dalliance with his teacher, something which is portrayed as being more steamy than inherently problematic. When the two of them finally break off their romance, an angry Pacey tells his teacher "I'm the best you'll never have," and she winces at him with a wistful, lingering look of regret which appears to say, "damn, I think this 15-year-old boy is right." Except, this is totally insane, right? And it's also rape. What the storyline plays on is the absurdly perpetuated idea that a male student having sex with his female teacher is high-five material worthy of some lifetime achievement award, whereas a female student having sex with her male teacher is simply considered assault. It's assault either way, guys.

5. Spike Has Sex With A "Buffy-Bot," Buffy The Vampire Slayer

In an ongoing storyline which definitely had its ups and downs (I personally shipped them for years as a teenager) big, bad vampire Spike became irrevocably obsessed with The Slayer but didn't want to particularly pursue his feelings because, you know, he had a reputation to uphold.

So, instead, he did the only thing he could do: had sex with a robot replication of Buffy, instead. These scenes are played for laughs and more to show how pitiful and pathetic Spike actually is, but they're also deeply concerning for how they replicate Buffy as a robotic sex slave.

There are countless movies which seek to normalize and even, horrifically, romanticize, stalking, and Friends is a show which also totally did that too. After realizing she's being followed, Phoebe confronts her stalker (played by David Arquette) and discovers that he's actually mistaken her for her twin sister. In this horrifying meet-cute, Pheobe then starts dating the creep because, hey, what's more alluring than a guy who is dangerously obsessed with the woman who shares your genes? The whole storyline was apparently made acceptable by the fact Phoebe was super quirky and a total oddball.

7. Celebrating The Objectification Of Women In Music Videos, Beavis And Butthead

Though Beavis and Butthead was also something of a parody of apathetic, couch-potato culture, not everyone got the joke. Adding commentary to a range of music videos which more often than not tended to feature grossly objectified representations of women, the mindlessly horny Beavis and Butthead would celebrate the jiggling, dehumanized female body parts portrayed. The characters were obviously total morons and part of the comedy came from laughing at their stupidity, rather than with it, but that isn't to say that there wasn't a sub-section of people who took the jokes at absolute face value, subsequently thinking that this was a hilarious, great way to treat women.

8. Zack Morris Is A Creep, Saved By The Bell

Ugh, Zack Morris was a total creep. As well as dreaming about impregnating women in his dreams, let's not forget that Zack also once pretended to be a woman just so he could watch girls get undressed. The absolute pinnacle of his creepiness, however, was the life-size, cardboard cut-out of fellow classmate and supposed friend, Kelly. Because if you can't have the real life version of the girl you're obsessed with then a mute facsimile of her will work just as well, right?

9. Women Are Regularly Portrayed As Fantasies, Married With Children

The less said about this the better, really, but I'm sure we can all agree that Married With Children was the one sitcom of the '90s which really loved to show fantasy daydreams through the eyes of it's male characters which basically reduced a bunch of young, "sexy" women to legs, breasts and asses. This happened all the time. And though the female characters did sometimes get their chance to daydream about sexy dudes with no tops on, greased up and carrying timber or whatever, they weren't as aggressively commodified into being random jiggling body parts as the women in the male fantasies were.

In the episode "The One With The Dozen Lasagne's," Phoebe kindly offers to give Rachel's boyfriend, Paolo, a massage, since that's her speciality and she's pretty cool. Except Paolo definitely isn't cool and takes it as an open invitation to grope Phoebe (without her consent) and to make a pass at her. Of course, the scene is only really played out for light laughs and though Rachel initially breaks up with Paolo for it (who sees nothing wrong with what he did), she still goes and has a regrettable one night stand with him in the following season. Not cool, guys.

11. Will Is Such A Trickster, Fresh Prince Of Bel Air

Let's face it, most episodes of The Fresh Prince Of Bel Air seemed to show Will using some form of japes, trickery, or lies on a woman in order to get a date out of her. He was kinda pushy and a total ass and thought nothing of reducing the ladies in his firing line of romance to their best body parts (just what every woman wants to hear while she's going about her business, right? A rhyme about her perfect derrière). The worst offending episode? Where Will somehow decides that the best way to seduce a woman is to continually carry on turning the lights off in the bedroom (after she repeatedly tries to turn them back on) before having Jazz come in, pretend to be a priest and fake marry them because his poor date doesn't believe in sex before marriage.

It's important to note that I love all of these shows, but part of loving something also means not turning a blind eye to content that remains problematic. Though a lot more TV shows these days are certainly trying to be conscious of the problem of perpetuating rape culture ideas to their audiences, there still needs to be a wider dialogue acknowledged within the mass media in order to encourage fairer, more balanced content overall.