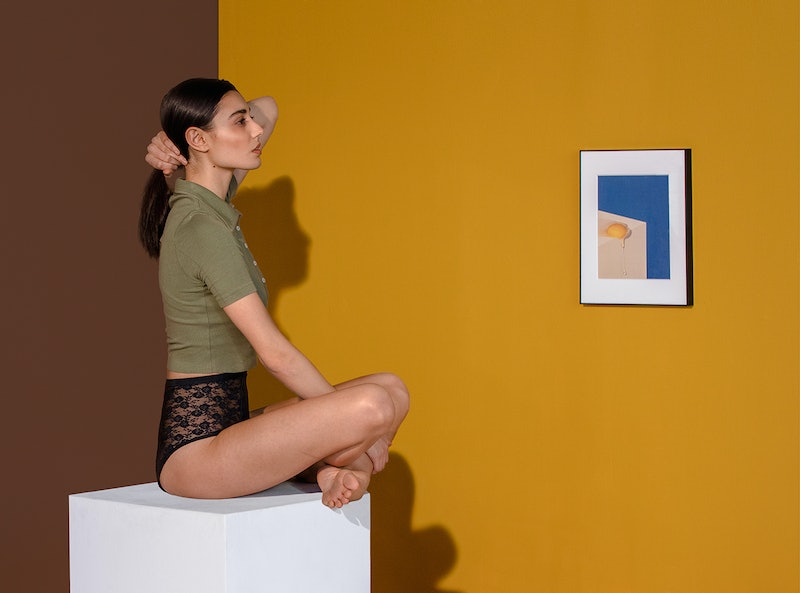 If there's one thing that many vagina-havers equally have a hard time embracing, it's their periods. Cramps, PMS symptoms, and more serious conditions like endometriosis can make getting your period a living hell. But Thinx does an excellent job chipping away at the rest of the pains in the ass about periods with their environmentally-friendly period proof underwear (which, over time, is friendly to your wallet as well) and their commitment to destigmatizing menstruation as something that's "gross" and inherently female.

Personally, it's always been very difficult for me to feel body positive on my period. Between past partners' insistence about staying far away from my period blood (or any topic remotely similar to it) and the fact that being on my period has often caused me to dissociate from my genderqueer body, I always dreaded the first day of my cycle and slapping on an endlessly-irritating pad. Because of all of the feminine imagery bombarding packaging and ads for menstrual hygiene products, my period felt like the one week a year I was forced to be a woman. Along with the condescending scented pads and other vaginal health products implying our "gross" vaginas need to be kept smelling like a field of flowers at all times, it can be very hard to feel good and right in the midst of your bleeding vagina.

Luckily, Thinx consistently works to remove the patriarchy from our period health, making us feel good and comfortable with our bleeding vaginas. Here's just some of the ways Thinx is one of the most body positive brands out there right now.

From a young age, we are taught to maintain a certain degree of shame surrounding our periods. It's something we have to whisper about, especially when in the company of those who don't get their period, as if "menstruation" is a dirty word. It's something we're convinced to spend hundreds of dollars on annually for disposable products, as if our periods are so gross that it's better to spend more money than to employ reusable and more economically feasible options. Thinx takes the patriarchy out of our periods with their products, ads, and social media presence, as they promote unapologetic period positivity into every part of their brand. By normalizing period-having bodies and the conversation surrounding them, menstruation is slowly becoming a less taboo subject. And that's amazingly body pos for all people with vaginas.

Speaking of vaginas, Thinx also does an excellent job of dismantling the hyper sexual stigma surrounding them. Last year, when the brand was still trying to get their glorious ads to cover the Union Square subway station, they were blocked for using "inappropriate" imagery in the ads themselves. This included objections against photos of grapefruit and a runny egg yolk, since it was suggestive of vaginas and a person's ovum. The MTA guidelines restrict ads that depict "sexual or excretory activities," so they classified periods as sexual and therefore too raunchy for the average NYC commuter's eyes.

However, the brand fought this nonsense through social media and lots of press — and now the lovely ads adorn every inch of the Union Square subway station (as well as other stations) for us all to enjoy on our daily commute. As they staunchly advocated for their brand through period stigma-busting, they demonstrated that there's nothing vulgar about our bodies or the way they bleed every month. The problem, as they showed through their fight with the MTA, is society.

3. And They Destigmatize Periods In Other Parts Of The World As Well

The stigma surrounding periods is certainly alive and well in the states, but it's much worse in certain other regions of the world. According to the Thinx website, many developing countries' lack of education and resources regarding periods causes 100 million girls to fall behind in school due to their monthly bleeding, eventually resulting in their dropping out. With every purchase of a pair of Thinx panties, a portion of the proceeds goes to AFRIpads to help women in Uganda make their own reusable menstruation products to distribute amongst period havers young and old. By providing some of these tools to create useful products and expel shame surrounding periods, Thinx empowers women to live fuller lives unhindered by a cis man made taboo.

4. Their Products Are Less Gender-Specific Than Most

Unlike the rest of their menstruation health counterparts, Thinx keeps the over-abundance of pink and flowery out of their designs and ad campaigns. With a range of underwear styles including thongs and boy shorts, there's a style for everyone's comfort zone and preference. And nothing about their packaging is in-your-face with femininity. However, despite the brand's gender neutrality and their use of a trans male model in their ads, their brand's motto is "For women with periods." It's confusing, since Thinx clearly makes period products for people with periods, based on their ads and branding. Although they are certainly moving in the right direction and have created a perfect product for many trans people with periods, they absolutely need to reflect this in their motto too. As Thinx knows very well, it's not just women that are getting their period.

Since Thinx is so body and period positive, they do not make efforts to mask the inherent "unsexiness" of a bleeding vagina with any promise of "powder fresh" scents in their products like so many other feminine health companies do. In fact, they seem to challenge people's taboo about period blood with the existence of their product alone, since many commenters who've read stories about the brand have expressed disgust at the idea of essentially "free bleeding" into your panties.

Of course, that's not exactly what Thinx is all about, since their period-proof panties are highly absorbent and keep the wearer feeling dry. But the fact that their very existence pushes back against the idea of "ew periods! blood is gross!" makes them bold warriors of body positivity in my book.

6. They Demonstrate That Periods Are Not Only For Cis Women

As a gender nonconforming person, the constant feminizing of periods and menstrual products makes me feel super dysphoric, and like somehow my body belongs less to me when it's menstruating. But Thinx's use of a trans man in their ads (model Sawyer DeVuyst) and the fact that their boy short design was made specifically with trans men in mind sends powerful messages to gender nonconforming and trans people on their periods. They're the only brand that dares to normalize the monthly bleeding of those who aren't cis women, creating positive and relatable media messages for non-women with a period.

Since looking at Thinx's ads multiple times a week on my way through the city, and since purchasing my own cycle set, I've felt I gained more agency over my menstruating body without having it feminizing it in a way I'm uncomfortable with.

7. They Don't Photoshop Out Certain Bodily "Imperfections" In Their Ads

When I first saw their subway station ads, I squealed in delight at the sight of stretch marks on a Thinx model's upper thigh. The brand is serving up some serious period posi and body pos realness in their ads, promoting the love of our stretch marks and natural lines with pride. They also don't edit out or attempt to cover up their trans model's chest surgical scars, demonstrating that all bodies (including trans bodies) are good bodies.

Check out Thinx's website and their lovely subway ads in NYC for your daily dose of body positivity.

More like this
Most Comfortable Underwear For Big Butts
By Audrey Williams
42 Black Owned Fashion & Beauty Brands To Support Today & Always
By Mekita Rivas, Shea Simmons, Kui Mwai and Dominique Norman
Is It Actually Bad To Cut Your Cuticles?
By Stephanie Chon and Paris Giles
How Skin Care Experts Are Stepping Up To Support Transgender Patients
By Audrey Noble
Get Even More From Bustle — Sign Up For The Newsletter