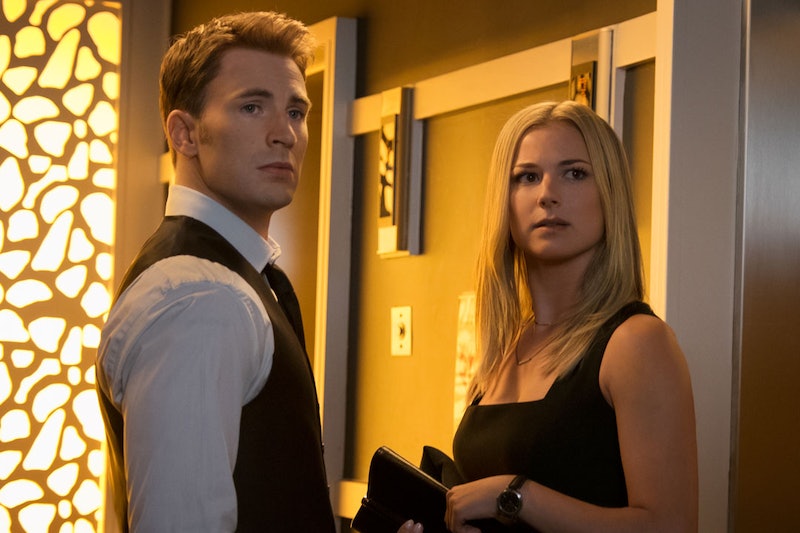 Pop quiz! What was the most interesting relationship in Captain America: Civil War ? There are plenty of good contenders for the title: Steve Rogers and childhood friend-turned-Hydra assassin Bucky Barnes; Captain America and frenemy-turned-just-plain-enemy Iron Man. Those are both solid choices. But even Tony Stark and an offscreen Pepper Potts would probably fall higher on the list than the film's nominally "central" romance: that between Steve Rogers and Sharon Carter.

Heck, even the brief exchange between Black Widow and Black Panther's bodyguard was more emotionally charged than the kiss between Captain America and Agent 13. Emily VanCamp's Sharon simply hasn't been a major enough presence in the Marvel Cinematic Universe yet to allow us to be deeply invested in her relationship with Cap — and the revelation in Civil War that she's Peggy Carter's niece only made things worse, not better.

If you find yourself put off by the idea of Steve Rogers making out with his dead former flame's niece, you're not alone. Even Peggy Carter's portrayer herself, actress Hayley Atwell, isn't a fan of Steve/Sharon. "I just feel that, you know — I wouldn't want to date my great aunt's guy," she told the crowd at the Dallas Comic Con Fan Expo this weekend, according to IGN. "It just feels like it crosses an incestuous boundary. And Peggy just died! That's even more disrespectful, right? It's like, don't touch that. You can't tap that!"

It's at this point that diehard comic book fans will likely point out that Steve's relationship with Sharon is pulled directly from the panels of Marvel comics. But the MCU has never been a direct page-to-screen adaptation, and there's no reason to include a forced romantic relationship where none is needed.

Atwell's objections don't only come from an outsider's perspective as a fan watching the film; she also objects to the Steve/Sharon pairing on a character level. "First of all, [Peggy]'d be turning over in her grave," she said. "She'd inject herself with the blue serum and become a super villain. She'd break out of her coffin and ground [Sharon]. She'd ground her! Then she'd kick Steve's ass as well." (Note to Marvel Studios: I would pay good money to see that movie.) "On all levels, it's just a big fat no," Atwell finished.

It's widely acknowledged that the MCU has a villain problem; outside of Loki, there haven't been any long-term, memorable villains that will go down in history alongside the likes of Heath Ledger's Joker or Ian McKellen's Magneto. But the franchise's lack of believable, interesting romantic relationships is an equally ubiquitous problem that more often goes unnoticed.

2008's original Iron Man largely worked because of the enjoyably prickly chemistry between Robert Downey, Jr.'s Tony Stark and Gwyneth Paltrow's Pepper Potts. No couple in the entire MCU since has come close to matching them. Black Widow and the Hulk? Random. Scott Lang and Hope van Dyne? Unnecessary. Thor and Jane? Boring. (That latter relationship was so underdeveloped that the recent news that Natalie Portman won't be returning for Thor: Ragnarok felt like barely even a wrinkle in the MCU's master plan.)

In fact, the MCU is great at pretty much every kind of relationship except romantic ones. Think of all the great non-amorous pairings out there: not just the aforementioned Steve/Bucky and Cap/Iron Man, but also Cap/Black Widow, Cap/Falcon, Thor/Loki, Black Widow/Hawkeye, and Spider-Man/whoever he's sharing a scene with, among others.

Due to the fact that Disney needs to be able to sell these films in international markets, the popular fan outcry to #GiveCaptainAmericaABoyfriend is unlikely to ever yield any actual results. But that doesn't mean the alternative should be forcing Captain America into an ill-conceived romance while Bucky looks on and nods encouragingly, as though the film simply needed to counterbalance its hero's admirably complex bromance with some good old-fashioned heterosexual smooching.

Just like female characters have never needed Captain America to save them, the star-spangled hero shouldn't need a half-baked romance to prove his masculinity, either.

More like this
'Bridgerton' S3 Teases Exciting Social Season For Penelope Featherington
By Bustle
Letitia Wright's Aisha Encourages A Vital Conversation Around Immigration
By Maxine Harrison
You Definitely Know The Voice Of Shuri's AI In 'Black Panther: Wakanda Forever'
By Brad Witter
This James Bond Event At Abbey Road Studios Was A 007 Fan's Dream
By Samantha Rollins
Get Even More From Bustle — Sign Up For The Newsletter