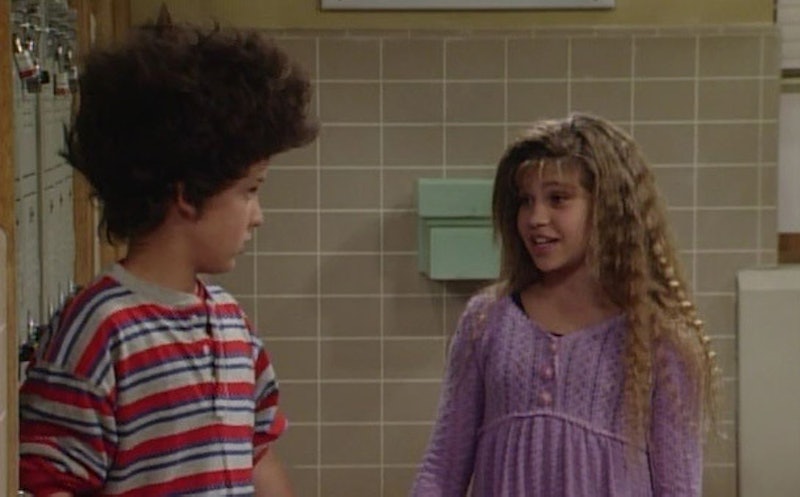 If you were a kid growing up in the '90s, you probably had some pretty awesome experiences. Truth be told, though, you probably had some awkward experiences in the '90s as well. But hey, even though there's a lot of awkwardness to be had in the day-to-day adventures of our lives, there's still something kind of fun and nostalgic about looking back on those hilariously uncomfortable experiences we had growing up. We've all been there, right?

Maybe it's because years have passed since we've felt those full-body blushes of embarrassment, but doesn't it feel a million times easier to look back on those awkward moments and laugh than it did when they were actually happening? I definitely remember going home and telling my family that I would "literally die" from embarrassment because of something that happened in school that day — but I have to admit, I did not "literally die." In fact, it's a struggle to remember what, specifically, set me into a crying fit on those kinds of days now. Middle school, am I right?

It's really normal to have a lot of growing pains during adolescence, especially when you reach middle school. A lot of people start experiencing puberty, start exploring their sexuality, or drift in and out of different friend groups and social circles. Looking back now, this all seems like the standard development of kids who are slowly becoming adults, but at the time, I (and probably the rest of my generation, too) were pretty certain these moments were the most humiliating, awkward things that would ever happen to us.

1. Crimping Your Hair Into Oblivion

I will (literally) never forget the day in the seventh grade when I let one of my friends crimp my hair before school. My hair basically turned into an enormous puffball, leaving me looking strikingly similar to a human-sized cotton swab. And, as anyone who has ever crimped their hair knows, my panicked brushing only made it look worse. At least it wasn't school picture day, right?

I was a pretty artistic kid, so I usually excelled in activities like tie-dying shirts during Field Day at school. Once, though, I offered to help a bunch of my friends tie-dye their shirts because they wanted them to, in their words, "look really cool." Apparently I crumbled under the pressure, because I distinctly remember at least one of those shirts turning completely brown due to too many mixed colors. Awkward.

3. Everything That Ever Happened At The Orthodontist

How many times did our braces, headgear, or retainers get in the way during middle and high school? For a lot of people, these painful years of metal wire were actually medically necessary, but still — nothing felt worse than seeing a photo when your face was completely obliterated by the glare of your headgear reflecting in the camera's flash.

Who else listened to a ton of '90s pop music? Yeah, me too. Looking back, I pick up on a lot of sexual lyrics and innuendos I definitely did not get when I was growing up. How many of us absolutely cringe thinking about the music we blared from our parent's radios while they drove us to school? It's bad. Really bad.

5. Faceplanting In Front Of Your Crush

7. Accidentally Messaging Your Crush On AIM

When I was growing up in the '90s, I absolutely loved logging onto AIM to chat with my friends about Important Life Things (basically, gossip). The most awkward part of AIM, though, was when you inevitably messaged the wrong person and realizing there was nothing in the world you could do to take it back. It was especially painful when you messaged something about your crush to your crush. Oops.

8. Getting Busted Dancing To Your Favorite Music Videos

Who else loved dancing to music videos on TRL after school? Grab a Capri Sun and some Dunkaroos, and then orchestrate your own elaborate dance to the music video countdown. Just, y'know... don't let your parents catch you.

9. Burning All The Desserts In Your Easy Bake Oven

Remember all that game you talked about your Easy Bake Oven baking skills? Promising to bring in cupcakes and brownies to your favorite friend or crush and then burning it all at the last minute? Yeah, awkward.

10. Having To Wear Goggles Over Your Glasses

Personally, I got glasses back in elementary school, but I wasn't allowed to use contact lenses until I was in high school. This meant that for a lot of activities, like swimming and sports, I had to wear goggles over my glasses so they didn't get broken or fall off of my face. Definitely not the coolest period of my life, but hey, at least I never broke my glasses, right?