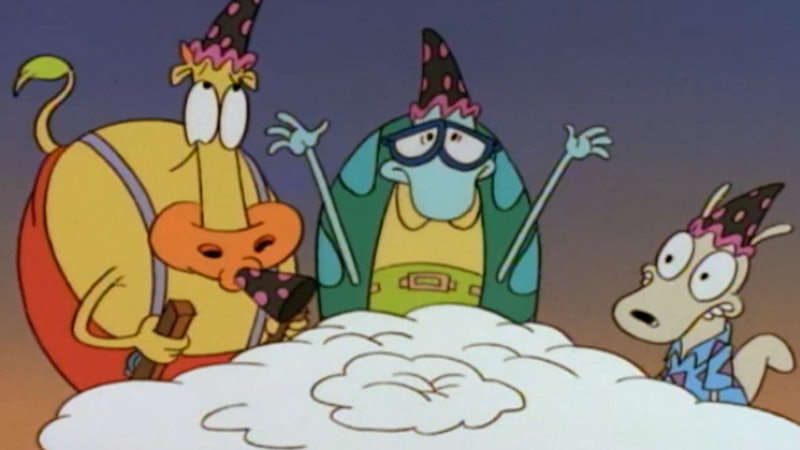 Parties are always fun, no matter what age you are — but I still maintain that no parties I’ve been to as an adult have been nearly as much of a blast as the parties I went to in the ‘90s as a kid. They often followed a predictable format; most of us probably went to the 11 types of parties seen here multiple times growing up. But that didn’t make them any less enjoyable — and, indeed, might even have made them more so. We knew exactly what to expect, and the anticipation of the fun times ahead made the whole thing that much more exciting.

Obviously most of these parties occurred in decades other than the ‘90s, too; I’m sure plenty of them (if not all of them) are time honored traditions of today’s youths as much as they were for ‘90s kids. The trappings of each one, however, were specific to the ‘90s — and it’s because of these trappings that they hit all our nostalgia buttons in all the right places. Sure, there are still pool parties today; however, there was nothing like a ‘90s pool party, with Super Soakers, Flintstone Push-Up Pops, and Crocodile Mile.

Honestly, it’s not too surprising that Millennials — or at least, those of us on the older end of the Millennial scale — have developed a soft spot for ‘90s-themed parties as adults. Who wouldn’t want to recapture the joy of all these kinds of shindigs?

The local bowling alley always felt like it was stuck in the ‘60s. The carpet was weird, the shoes were weirder, and most of the machines in the arcade were always broken… and yet, that was all part of its charm. Also, never underestimate the amount of shenanigans a group of 10-year-olds can get up to when let loose in such a place.

There was the pizza party at your BFF’s house, of course… but nothing beat a pizza party that took place at an actual pizza parlor. I grew up in a pretty small town, so we didn’t have a ton of chain restaurants; however, the one we did have was a Papa Gino’s, and I loved that place as only a small child could. Bonus: It had a jukebox. A real one — not those silly digital versions stuck to the wall in every bar in every major city these days. It was the perfect party situation.

Unlike classroom birthday parties, classroom holiday parties were truly epic. Whether it was a Halloween shindig complete with costumes, deskside trick-or-treating, and Scary Stories To Tell in the Dark , a winter holiday to-do with paper snowflakes and party punch, or a Valentine’s Day party with cards, flowers, and plenty of sweets, nothing beat skipping out on lessons for a period — or even half the day — in favor of some sort of celebration.

You know the deal: Too many snacks, The Goonies, Clueless, “light as a feather, stiff as a board,” the works.

Or, alternately, the turn-on-the-hose-and-hook-up-a-Slip-n-Slide-in-the-backyard party. Both would do, particularly in the heat of the summer. Ideally, this kind of party had all the Popsicles you could eat, and a Carvel ice cream cake to top it all off. Don’t forget the pool noodles and the Super Soakers.

Because I was an intensely bizarre child (not a surprise, given that I grew up to be an intensely bizarre adult), one of my favorite activities growing up was reading party planning books. Yes, even when I was absolutely not planning a party. My favorites were the Penny Whistle books; I had both The Penny Whistle Party Planner, originally published in 1987 and revised in 1991, and The Penny Whistle Birthday Party Book, which was published in 1992. I did eventually throw one of the parties suggested in the birthday party book — a chocolate factory party for (I think) my 10th birthday — and you know what? It was awesome. It taught me the value of a good party planner at a very young age.

I’ll be honest: I never really understood why the boy-girl party was such a big deal. My confusion was probably due to the fact that pretty much all of my parties growing up were boy-girl parties, though; I had both friends who were boys and friends who were girls, so of course I invited both to whatever shindigs I threw.

Particularly as we aged out of the “kid” demographic and started entering the “young teen” one, though, I guess I can understand how the boy-girl party could reach such a hallowed status. For one, if your parents previously didn’t allow you to have boy-girl parties, it was a right of passage; and furthermore, the boy-girl party marked the time we stopped having activities planned for us by the grownups and started being left on our own in someone’s finished basement with snacks, movies, and the inevitable game of Spin the Bottle. It felt deliciously risqué.

Maybe you went to Chuck E. Cheese, or maybe you went to a mom-and-pop arcade; either way, though, you spent the afternoon hopped up on soda and jamming quarters into every game cabinet you could get a hold of. We were all terrible at Pac Man and the pinball machines were always broken — but with a pocketful of tickets hard won from Skee-Ball, the world was your proverbial oyster. Or at least, the world was a couple of Jolly Ranchers and a few mini Tootsie Rolls.

Because of my aforementioned small town situation, the nearest roller rink was about 45 minutes away from where I lived. The distance, however, did not stop every single one of my friends and me from having at least one birthday party at it when we were somewhere in the 8-to-12 age range. True, it cost a little extra to rent in-line skates than it did to rent regular roller skates… or, you could earn extra cool points by just bringing your own.

I wasn’t often cool as a kid, but I was cool when I was strapping on my very own Rollerblades at Timmy’s Roll On America party.

This one was actually usually connected to the skating party for me — Roll On America also had a laser tag arena, and one of the packages offered included the skating, some tokens for the arcade, and a couple of rounds of laser tag. You could also do all laser tag and no skating if that floated your proverbial boat. Oh, and hey, did I mention that the restaurant attached to the place was a pizza place? Seriously, you guys. There is nothing better than a pizza party, skating party, arcade party, and laser tag party, all in one go.