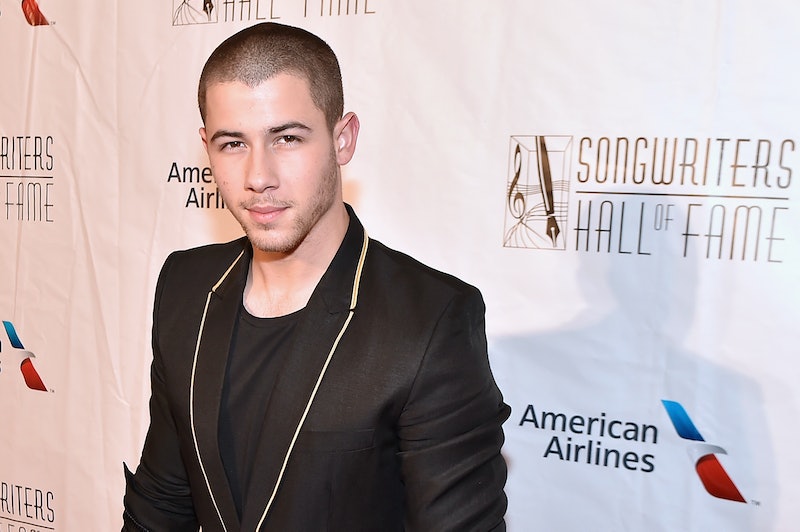 Nick Jonas' third solo studio album dropped on Jun. 10, so it's time for me to get into my natural habitat and start asking the hard-hitting questions, like what does the album title Last Year Was Complicated mean? This is basically the one week a year when it's acceptable for me to be as obsessed with Nick Jonas as I am, so you better believe that I'm gonna take advantage. So with that in mind, let's get to the bottom of this.

Typically, an album will be named after the artist themselves or one of the tracks, but, in this case, Jonas has already done the former — his sophomore album was called Nick Jonas — and skipped right over the latter, choosing a title that speaks to the general vibe of the album instead of connecting to a single song. Kind of like how Adele names albums after the age she was when she wrote them, Last Year Was Complicated is a snapshot of Jonas' 2015, which was... you guessed it... complicated.

On the one hand, Jonas had a lot of things going well, like a successful North American tour, a recurring role on Scream Queens , and his feature film debut in Careful What You Wish For , but also experienced the heartbreak of the end of his two-year relationship with Olivia Culpo. A real mixed bag, if you will. But Jonas was just going to let that be reflected in the tracks themselves without highlighting it with the album's title, until he got some advice from the unlikeliest of places: Jay Z. As Jonas told Carson Daly on 97.1 AMP Radio's Mornings:

I had a title picked out. It was called "Unhinged," it’s one of the songs on the album. And [Jay Z] said, ‘Look, listen. As I’ve heard the whole body of work now and gotten to know you better, I don’t feel like it quite sums up the story you’re telling. So, let’s just talk about this year of your life. What’s it been like?’ And I said, ‘Last year was complicated.’ And he was like, ‘That’s the title!'

Crazy, right? I never would have imagined that Mr. Beyoncé himself had a hand in this album title, but there you have it! Jay Z and Nick Jonas met in Summer 2015 at the Made in America Festival, and now they're apparently buddy-buddy enough that they sit down for casual little chats about, y'know, what Nick Jonas should name his next album. What a world, you guys. What a world.