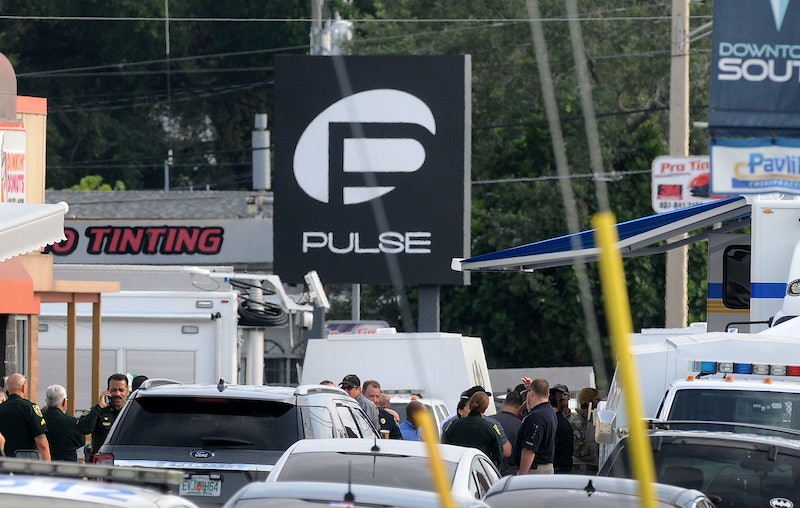 Earlier: More and more details are becoming clear in the aftermath of the Orlando nightclub shooting that left 50 people dead, and many others injured. We know that the attack is being investigated as an act of terrorism; we know that this is the deadliest mass shooting to happen in the U.S., and now, devastatingly, we are beginning to find out the names of the victims who were killed. Edward Sotomayor Jr. was an Orlando shooting victim who was one of the first four to be identified among the people who lost their lives in the attack, according to a statement issued by the city of Orlando. In the same statement, the city added that next of kin has been contacted.

Little is currently known about the victims who died at Pulse nightclub, though more details are emerging. Shortly after the city of Orlando released the first four victims' names, Barrel 87, a gay bar in Sarasota, Florida, posted a memorial to Sotomayor Jr. on Facebook, along with what appears to be a photo of him, in tribute. It wrote: "You will be missed. An angel watching over us now. May you Rest is peace Eddie! Love from your Sarasota Family."

The New York Daily News reports that Sotomayor, 34, was a "national brand manager at AlandChuck Travel." On Twitter, there was an outpouring of grief following news of his death.

The city of Orlando posted the following message on its website on June 12:

On this very difficult day, we offer heartfelt condolences to today’s victims and their families. Our City is working tirelessly to get as much information out to the families so they can begin the grieving process. Please keep the following individuals in your thoughts and prayers. #PrayforOrlando

It also identified three other victims who were killed in the attacks, Stanley Almodovar III, Luis Omar Ocasio-Capo, and Juan Ramon Guerrero. The city will continue to update with more information as it becomes available.

In a heartbreaking address to the nation, President Barack Obama said he grieved for the victims and their families, adding that the "massacre is therefore a further reminder of how easy it is for someone to get their hands on a weapon that lets them shoot people in a school, or in a house of worship, or in a movie theater, or in a night club." He added:

The city of Orlando has also set up a hotline for family members looking to find out information about loved ones following the attack: 407-246-4357.