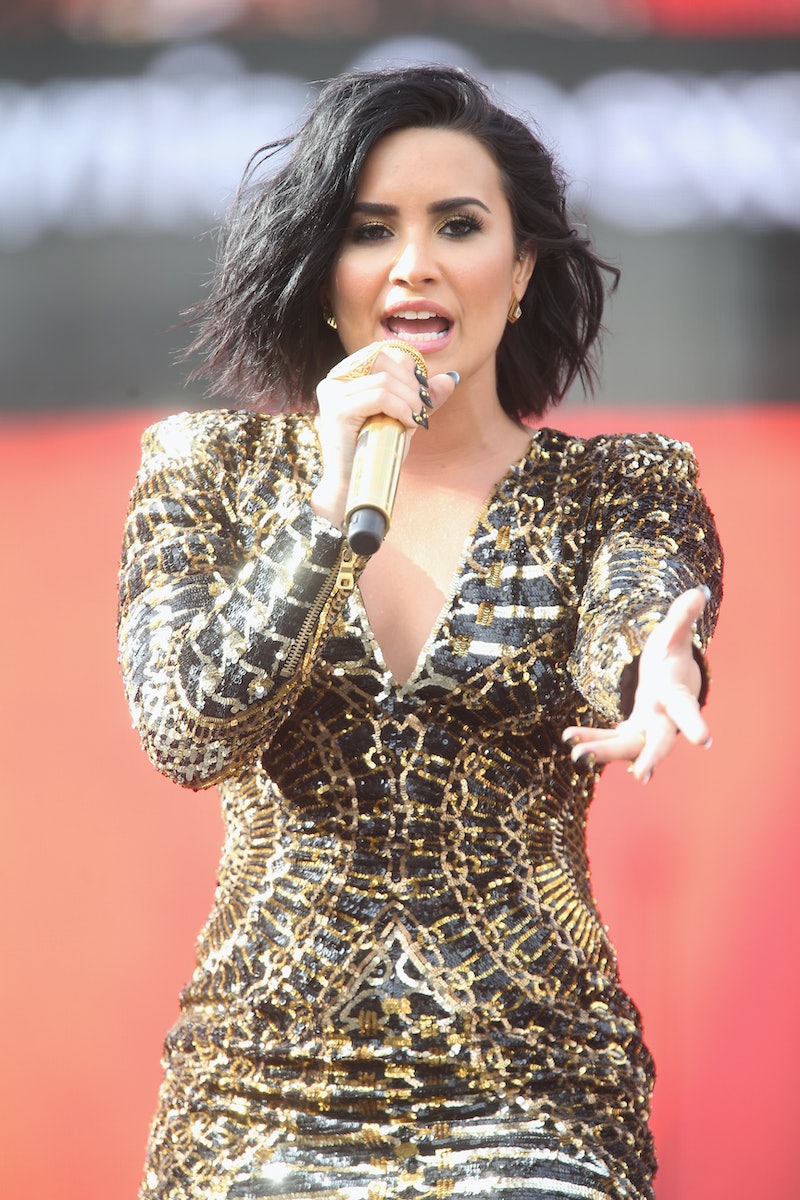 You can't get rid of her for long. Only 24 hours after a self-imposed hiatus, Demi Lovato returned to social media on Tuesday. Why did the singer leave Twitter and Instagram in the first place? Well, she posted, "Damn I gotta quit sayin sh*t. Bye Twitter." She then added another tweet saying she was leaving Instagram too. Apparently the negativity of others' comments was getting to her, and honestly, I can't blame her. But it turns out the 23-year-old couldn't stand being away from her fans or her soapbox. And if you think Lovato made the most of Twitter before this, she vowed,

F*ck this.. I'm back b*tches. And I'm coming back more honest than ever.

I have two responses to the "Skyscraper" singer's tweet, which straight-up sounds like a Pretty Little Liars text from A: First of all, she really loves to curse. (Not that there's anything wrong with that, but jeez, lots of profanity in there.) And secondly, more honest? I had no idea that was possible. On her account, the star is known for dropping major truth bombs and not biting her tongue when it comes to topics she's passionate about. Sometimes they stir up a bit of controversy (like when she commented on the #FreeKesha situation and called out other celebs who hadn't). Other times, her honesty is political, like when she voiced support for presidential candidate Hillary Clinton.

Whether you agree or disagree with her stances on certain topics, it's hard to not respect her for being so straightforward. If she's going to be more honest than ever, perhaps we should all brace ourselves for some serious truths. In the meantime, let's relive Lovato's most honest moments on Twitter.

1. Explaining Why She Unfollows

Basically, she was telling people not to read too much into who she unfollows. But also, she isn't afraid to admit some people post way too much.

Her tweet about Lemonade has me chanting, "One of us. One of us." Yup, she's part of the Beyhive.

3. Going With Your Gut

This honest advice is really about being truthful with yourself and doing what makes you happy. Words to live by.

From advocating for gun control to supporting the victims, her response to the Orlando shootings is heartbreakingly honest.

The singer has been open about her addiction and recovery. This tweet shows part of that struggle.

Too tired to give two f*cks

Lovato's IDGAF attitude is respectable, especially when she puts herself (and her need for a nap) first.

I'd rather annoy people with my honesty and loud opinions than stay silent and be fake as f*ck. #lasttweetofthenight #goingtosleep

In addition to that tweet, she also wrote, "maybe I rant online because people assume they know things and their entitlement to know makes me feel obligated to defend myself." Hey, you can't blame her for sharing her thoughts and standing up for herself.

Some people deal with heartbreak silently or let the news slip out in the tabloids. Not Demi Lovato and Wilmer Valderrama, though. They took control of their story and shared the breakup news themselves.

When she wasn't feeling well, Lovato shared this picture from skiing. She also joked about starting a line of nose tampons.

She didn't shy away from taking a stand against North Carolina's discriminatory HB2 law. Instead, she and Nick Jonas canceled their concert.

After this, she also posted a tweet confirmed that not only is Lovato on the #ImWithHer side, but she was intentionally quoting Spiderman about the notion that with great power comes great responsibility.

This is more lighthearted than the rest on the list, but just as important. Who doesn't want dozens of dogs?

She didn't hesitate to go after Donald Trump with this one.

After that, Lovato wrote,

Women empowerment is tweeting at 2:30 am knowing the consequences of these tweets and not giving a single f*ck.

These tweets were posted following the news of Kesha's court case. She seemingly called out other feminist celebs for not speaking out too.

Prior to that, Lovato posted,

Do you ever feel so hormonal and bloated that you can feel your butt got bigger when your walk?? #f*ckyoueve

You may blush when talking about bloating or your butt, but Lovato doesn't hold back from these topics.

Everybody has that one friend (or multiple) who suck at answering texts. She owns the fact that she's that person.

Yup, her fans come before her haters any day. As they should.

A recurring theme here is Lovato's love for her fans and herself. She's not afraid to defend her own name — and if anything, it can inspire others to stand up for themselves too. Glad to have her back on Twitter.