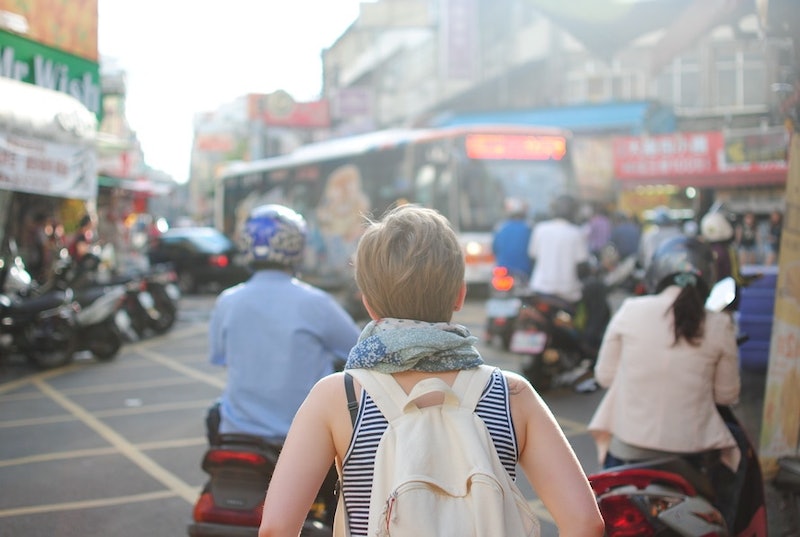 When it’s the dead of summer, it can feel like showering and applying makeup is a total lost cause. Take one step outside and it sweats right off, so there doesn’t seem to be a point. And that’s not even considering staying fresh during your commute to work. Now that can seem like an impossibility.

However, as someone who used to show up to work looking like a melted mannequin, I can tell you that there are ways around the horrible makeup/sweat/work outfit combo. I learned some tricks firsthand as a summer intern a few years ago. I remember (oh, how I remember) scrambling around in the bathroom of a fancy magazine's office, trying desperately to sop up my sweat before the editor-in-chief saw me. (Yes, it was like a scene out of a movie.) I was always a mess after commuting in by subway, or running around to photoshoots in the July heat. And I'm pretty sure I tried everything to make myself a tad bit more presentable — despite the humidity.

Thankfully, it wasn't difficult. As a beauty intern, I had a desk littered with makeup samples, sprays, and perfumes. And of course that bathroom, which became my first stop after arriving at work. I was eventually able to come up with a plan that ensured I got to work looking and feelin' fresh, and remained that way for the rest of the day. Below are some of these tips for staying cool and fresh during your commute to work, no matter the temperature.

1. Start Off With A Warm Shower

This might sound counterintuitive, but the warmer your shower, the cooler you'll stay on the way to work. That's because cold showers cause your body temperature to rise to compensate for the chill, meaning once you get out of the water, you'll heat up quickly, according to Emily Platt on HerCampus.com. Besides, a nice, warm shower has the added benefit of being extra cleansing, Platt noted. (A necessary thing when it's mid-summer and you're feeling sweaty and gross.)

If you have a long walk or bike ride ahead of you, be sure to give yourself extra time so you can go about it at a leisurely pace. "Try to take the ride easy, especially the final leg," suggested Tessa Miller on Lifehacker.com. "It's common to sweat the hardest immediately following the completion of your ride. With no wind increasing evaporation, the sweat starts to pool." So go slow, and take a few minutes post-commute to relax before heading into work.

3. Wipe Down With A Cleansing Cloth

In the dead of summer, you're going to get sweaty — slow bike ride or not. Do yourself a favor and pack some cleansing cloths so you can wipe up your sweatier bits once you arrive. Look for the cooling kind, which will feel extra-refreshing.

4. Wear Your Hair Up

If you have long hair, now's the time to be all about the top knot. Because in the summer, nothing is worse than sweaty strands plastering themselves to your neck. You can also try out some of these braid trends, which I think look great. Sigh, if only I didn't have short hair...

5. Spritz On Some Dry Shampoo

By now we are all well aware of the miracle that is dry shampoo. But never is it more of a godsend than on humid, muggy days. Spray it on your oily bangs, or sweaty part, and your hair will be super fresh in no time.

6. Use A Makeup Primer

Putting anything extra on our face during the hottest months of the year may not seem like a great idea. But trust me when I say that you need to get yourself some makeup primer. "You won't regret the few seconds it takes to apply a primer, which goes on after moisturizer but before face makeup ... They don't feel at all like a heavy, additional layer, and they really help hold makeup in place," said Alyssa Kolsky Hertzig and Sam Escobar on Good Housekeeping. It'll be totally worth it.

7. Brush On A Loose Powder

If your face looks like it's melting off, as mine did in my intern days, then it may be time for some loose powder. As makeup guru Bobbi Brown said on Prevention, "A best bet for summer, it's light and evens out skin tone yet knocks out shine." Just be sure to apply it with a brush, instead of a puff, which has a tendency to deliver too much powder.

8. Stock Up On Blotting Papers

Another good way to soak up your oils is with blotting papers, which I swear by. "These disposable, powder-free paper sheets keep oily areas in check. You can use them as often as you need — unlike powder, which looks cakey if applied too often," Brown noted.

9. Get Fancy With Some Face Mist

This tip might not be for everyone, since you probably have enough to carry around in your bag as it is. But if you feel like really freshening up, then consider a face mist. In fact, why don't you keep some at your desk so you can plop down, revel in that glorious A/C, and mist away? Sounds pretty darn refreshing to me.

10. Pick Up A Facial Antiperspirant

To be honest, I had no idea facial antiperspirants existed, but they sound like a great invention. As Platt said, "Facial antiperspirants ... keep the [sweat] beading at bay, slide on smoothly under makeup, and won't stain." Pick one up, as it'll definitely come in handy when cramming yourself onto a muggy subway.

Consider designating a shirt for the commute. Sweat away in it to your heart's content, and then swap it out for your actual work attire once you arrive. Just be sure to go for darker colors. "Light colors — especially gray and white — are the worst at concealing sweat," noted Michelle Persad on HuffingtonPost.com.

If you're a makeup wearer, then I'm sure you'll be sad to see the sorry state it's in after your commute. Melted lipstick, oily skin, smeared mascara — it won't be pretty. So either commute sans makeup, and do your thing in the bathroom at work. Or give yourself a touchup once you arrive. I suggest keeping some mini versions of your favorite makeup brands in your desk. They'll be just what you need to look put-together.

If you're running around in the sun, and trying not to be late for work, then sweating is an inevitability. And that means you're going to lose fluids. The best way to prevent yourself from getting dehydrated is to sip water throughout the day, even when you're not thirsty. Thirst is a sign of dehydration, according to Katherine Tallmadge on LiveScience.com, so you want to prevent yourself forgetting to that point. Consider toting along a water bottle, and snacking on hydrating fruits for lunch.

I may have learned it the hard way, but that doesn't mean you have to. Do even one or two of these things, and you'll up your chances of arriving to work looking fresh, feeling cool, and staying presentable.