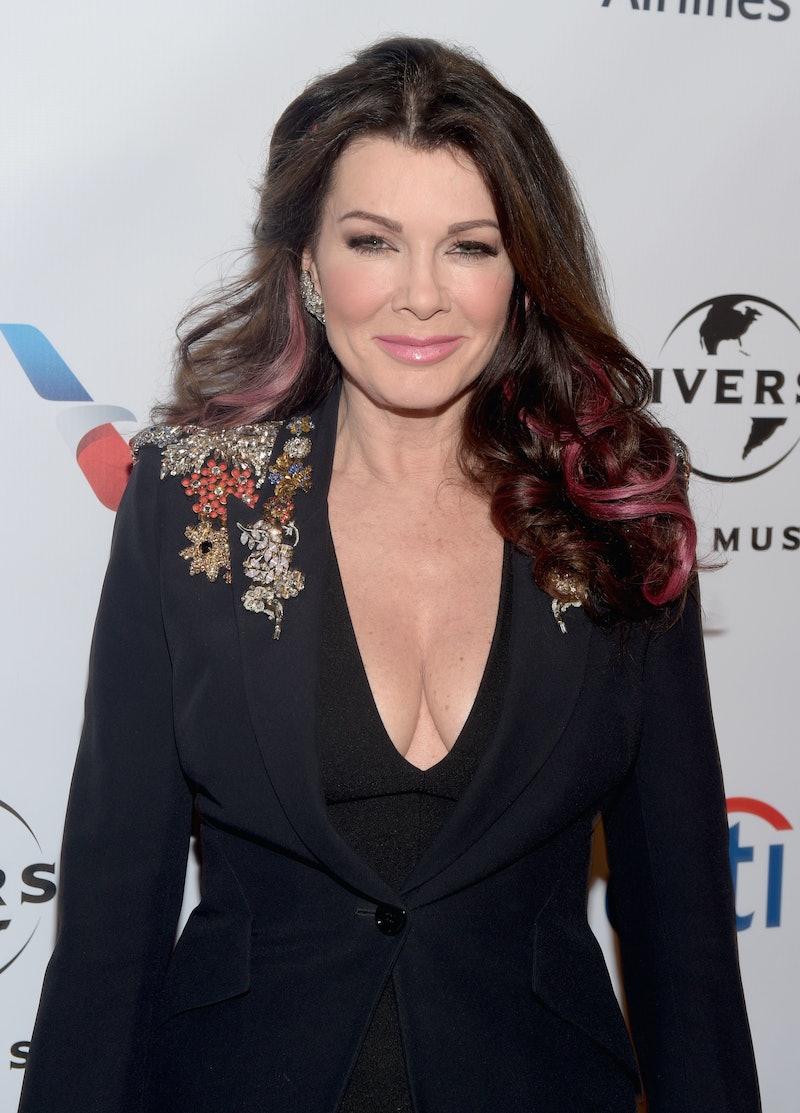 If this news is true, Real Housewives of Beverly Hills may never be the same. According to TMZ, Lisa Vanderpump is leaving RHOBH . Bustle reached out to Bravo regarding Vanderpump's status, but the network declined to comment. Per TMZ, "a source close to production" revealed LVP is just way too busy for Housewives and she is the only RHOBH star who hasn't signed on for Season 7. Apparently, Vanderpump is over the "negative vibes" from Season 6, which I assume refers to all that Munchausen talk and her feud with Lisa Rinna. The rumors don't stop there, because TMZ also claims that Vanderpump doesn't have the time to focus on RHOBH thanks to running SUR, Pump, fighting China's Yulin Dog Meat Festival, and filming her other Bravo series, Vanderpump Rules. Update: On Thursday, Vanderpump confirmed she is returning to RHOBH, tweeting, "Yep, never thought I would return, but after many discussions. The pump is still in the game. Thank you to all of you."

Earlier: There's no doubt she is busy, but who knows if that is the real factor behind her supposed exit. Apparently, she also met with producers to discuss her concern for not having enough time on her hands, but, again, all of this is pure speculation. Maybe she can just become a friend rather than a full-fledged Housewife?

So, let's say she is really leaving or just thinking about departing the Bravo hit. RHOBH without LVP would be a drastic change to the series, especially with her being part of it since day one.

Whether or not you are a Vanderpump fan (even I sometimes find myself not supporting her), possibly more bad than good would come from her departure — and here's why.

Who Will Stir The Pot?

On more than one occasion (actually, more like all of them), Vanderpump has stirred the pot, has been in the middle of all the drama, and has brought a lot of tension to RHOBH. Hey, after all that's what the series is about. Without her, will it be as entertaining and juicy? Yeah, the other Housewives may be able to handle it all on their own, but there will definitely be something amiss without LVP in the mix.

Who doesn't love seeing all the love LVP gives to animals, including her dogs. And Giggy has become a star in his own right. She definitely brings an animal-friendly aspect to the series, in addition to even more ridiculousness with her over-the-top gestures for her pets. Don't lie, you know you'd miss it.

Maybe you don't ship Kyle Richards & LVP as BFFs, but sometimes they make a hilarious duo. Also, without her other half, what will Richards do? Does this mean Faye Resnick will come on full-time? Will Richards be a totally different Housewife? I have so many thoughts, but thinking about Richards without Vanderpump, yeah, RHOBH would surely have a different dynamic.

Witty One Liners Will Be MIA

I do admire LVP's honesty and her witty banter. Sometimes she just hits the nail on the head with her comments, which is always refreshing and something I would truly miss if she chose to leave RHOBH.

It's hard to imagine RHOBH minus Vanderpump, but even if she does leave, I guess fans will still get a fill of LVP on Vanderpump Rules, right?