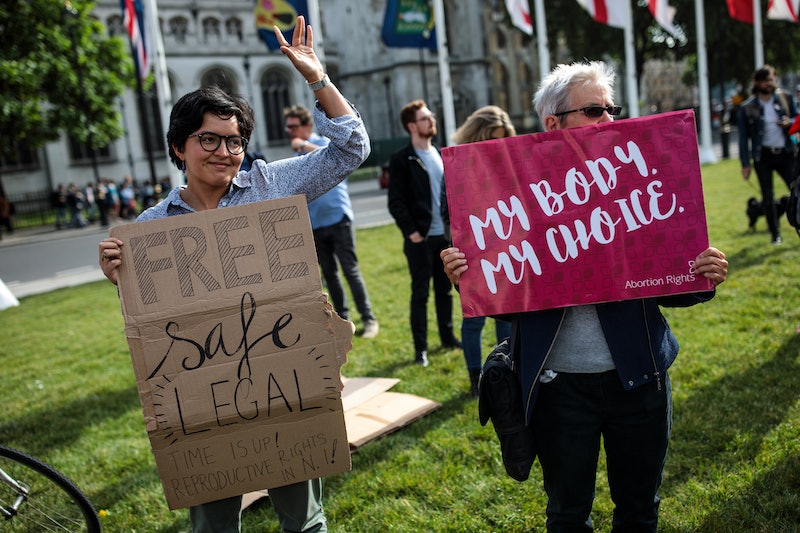 So you're talking to someone who says something ignorant. And while you know that they're in the wrong, your words escape you. To make sure that doesn't happen, we've compiled a series of reference guides with the most common arguments — and your counter-arguments — for the most hot-button issues. Ahead, how to argue the pro-choice position.

Common Argument #1: A fetus is a human being, and human beings have the right to life, so abortion is murder.

The Pro-Choice Argument: I'm probably not going to convince you that a fetus isn't a life, as that's basically the most intractable part of this whole debate, so I'll be brief:

Common Argument #2: If a woman is willing to have sex, she's knowingly taking the risk of getting pregnant, and should be responsible for her actions.

The Pro-Choice Argument: You're asserting that giving birth is the "responsible" choice in the event of a pregnancy, but that's just your opinion. I'd argue that if a mother knows she won't be able to provide for her child, it's actually more responsible to have an abortion, and in doing so prevent a whole lot of undue suffering and misery.

But let's look at this argument a bit further. If you think getting an abortion is "avoiding responsibility," that implies that it's a woman's responsibility to bear a child if she chooses to have sex. That sounds suspiciously like you're dictating what a woman's role and purpose is, and a lot less like you're making an argument about the life of a child.

Common Reply: No, because women can practice safe sex and avoid getting pregnant. If she refuses to use contraception and gets pregnant as a result, that's her fault, and her responsibility.

Even then, no contraception is 100% effective. Presumably, you oppose abortions even in cases where contraception fails (and it does sometimes fail, even when used perfectly). If that's true, you're saying that, by merely choosing to have sex — with or without a condom — a woman becomes responsible for having a child. And that's a belief that has everything to do with judging a woman's behavior, and nothing to do with the value of life.

Common Argument #3: But I'm OK with abortions in cases of rape.

Common Argument #4: "If it's a legitimate rape, the female body has ways to try to shut that whole thing down."

Common Argument #5: Adoption is a viable alternative to abortion.

The Pro-Choice Argument: This implies that the only reason a woman would want to get an abortion is to avoid raising a child, and that isn't the case. Depending on the circumstances, the mere act of having a child in a hospital can cost between $3,000 and $37,000 in the United States. Giving birth is dangerous, too: In the United States, pregnancy complications are the sixth most common cause of death for women between the ages of 20 and 34.

Even before birth, there are costs to pregnancy. In addition to the whole "carrying another human being around in your stomach for nine months" thing, many women, particularly teens, are shunned and shamed for their pregnancies — not only by friends, families, employers, and classmates, but also by advertisements in the subway. There's also the risk of violent retribution from abusive partners and parents.

In short, there are a lot of reasons a woman might seek an abortion. Adoption doesn't address all of them.

Common Argument #6: When abortion is legal, women just use it as a form of birth control.

The Pro-Choice Argument: Do you have evidence of this? Considering that contraceptives are cheaper, easier, less painful, less time-consuming, less emotionally taxing, and more readily available than abortions, it seems odd to suggest that women who've already decided to use birth control would select abortion as their preferred method. It's more likely the opposite: Historical and contemporary data suggests that women will seek abortions regardless of whether or not they're legal, but that when birth control and contraceptives are more widely accessible, abortion rates go down.

The Pro-Choice Argument: When performed by trained professionals, abortions are one of the safest procedures in medicine, with a death rate of less than 0.01%. The risk of dying while giving birth is roughly 13 times higher. Abortions performed by people without the requisite skills and training, however, are extremely unsafe. An estimated 68,000 women die every year from back alley abortions, which are generally most common when abortion is illegal and/or inaccessible.

If you'd like to examine the health impact of banning abortion, consider Romania, which banned abortions in 1966. That policy remained in place for about 23 years, during which time over 9,000 women died from unsafe abortions, and countless others were permanently injured. That's around two women dying every day. When the policy was reversed, maternal mortality rate plummeted to one-eighth of what it was at its peak under the no-abortion policy.

When abortion is illegal, it becomes exponentially more unsafe for both women and their children. You may not like the fact that women will seek abortions even when they're illegal, but it is undeniably a fact nonetheless.

Common Argument #8: What if Winston Churchill or Martin Luther King had been aborted?

Your Response: Are you saying abortion policy should be influenced by how good of a person a fetus ends up becoming? If that's the case, what if Joseph Stalin or Pol Pot had been aborted?

Common Argument #9: Many women who get abortions regret their decision later on.

The Pro-Choice Argument: This is a pretty common argument. As with shaming of teen moms, it pops up in subway ads.

This is a bad argument. Should the government ban people from doing things they sometimes regret? Think of everything you've ever regretted — not moving after college, dating the wrong person — and ask yourself if you wish there had been a law to prevent you from doing that thing. You probably don't, because you probably believe people should be able to choose their own paths in life regardless of whether they regret those choices later on. I agree, which is part of why I'm pro-choice.

The Pro-Choice Argument: By that rationale, America also shouldn't have a military, since that's funded by taxes, and many taxpayers find American foreign policy morally disagreeable. Also, the Hyde Amendment prevents most public funds from going toward abortions. But that's a moot point, because these are two separate arguments. Believing that abortion should be legal doesn't require you to also believe that taxpayer dollars should fund abortions.

Common Argument #11: What if your mother had aborted you?

The Pro-Choice Argument: Well, if I'd never come into existence in the first place, I probably wouldn't have any strong feelings on the matter. Anyway, I love my mother very much and respect her right to make whatever decisions are right for her body and life.

The best pro-choice arguments, in summary:

This article was originally published on March 5, 2014