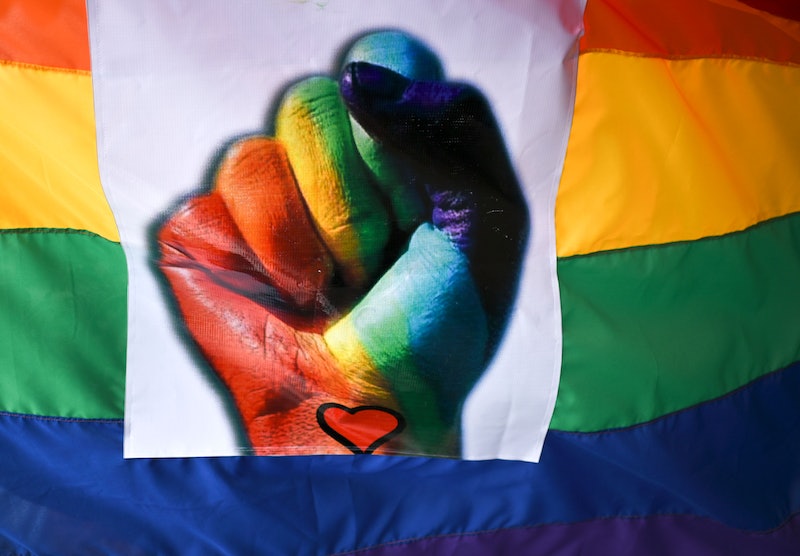 Being the visual society that we are, sometimes things are better understood via images, whether they're photographs or pieces of art, videos, or GIFS. As a queer writer, I spend a lot of time looking for queer-related GIFS — so it's perhaps unsurprising that in my searches, I've stumbled across a huge number of GIFS that perfectly illustrate LGBTQ life in the 21st century. And although many of them are funny, or cute, or what have you, they're also all important: As the saying goes, a picture is worth a thousand words, and these GIFs can help explain what it means to be LGBTQ today in a way that words sometimes can't.

There are, of course, some common themes throughout history that come with being LGBTQ. People have always had a hard time coming out; gay, lesbian, queer, and gender non-conforming have always been discriminated against and stereotyped; meeting places for LGBTQ people have often been bars, clubs, and cafes; and so on. These things may be real for the 2016 LGBTQ experience, but they are not limited to the 21st century. However, some things — like the experience of online dating as an LGBTQ person, queer celebrities coming out openly, and broader societal understandings of constructs like masculinity and femininity are — are unique to our current times. They're of course far from the only things about being LGBTQ today that are different from what it was like to be LGBTQ in previous generations — but they're a start.

We could spend countless hours and hundreds or thousands of pages discussing what it means to be queer in 2016. But we can also turn to the internet's favorite form of visual communication — GIFs — to get the talking started for us. So in that spirit, here are 19 GIFS that perfectly explain what it means to be gay, lesbian, bisexual, transgender, gender-non conforming, or queer in the 21st century.

1. There Are More and More Celebrities Coming Out

And it's totally not a big deal because people are starting to understand that anyone can be LGBTQ.

2. There's More LGBTQ Representation On TV Than Ever Before

Though some of the representation is problematic, a lot of it is positive and inclusive. We've still got a lot of work to do, but we've also come a long way.

3. The Narrative Around Trans People Is Moving Away From Surgery

It's becoming more inclusive about trans as an identity instead of a body. This is extremely important.

4. Definitions of Femininity And Masculinity With Regards To Gender And Sexuality Are Changing

People both within the LGBTQ community and outside of it are beginning to loosen up their understandings of what it means to be "male" or "female" — as well as acknowledging that gender isn't a binary.

5. The Mantra of Many People Has Become, "Down With Binaries!"

6. But For Some Reason, Some People Are Still Opposed To Homosexuality

Even when it has literally nothing to do with them. It's weird.

7. And Discrimination Against LGBTQ People Is Still A Problem

Again, even when it has literally nothing to do with them. Legal protections still have a lot of catching up to do; according to the ACLU, 28 states have absolutely no anti-discrimination laws protecting sexual orientation or gender identity.

8. But Those Who Support The LGBTQ Community Are Starting To Outnumber Those Who Don't

Public opinion is shifting to favor the safety and other basic liberties of LGBTQ people. For example, according to data from the Pew Research Center, 57 percent of Americans opposed same-sex marriage in 2001 — but in 2016, only 37 percent opposed it. In contrast, the 35 percent of Americans who supported same-sex marriage in 2001 one grew to 55 percent in 2016.

9. Gay Marriage Is Finally The Law of the Land!

Federal acceptance is particularly excellent news for people who previously lived in states that didn't recognize gay marriage. We celebrated the first anniversary of the historic Obergefell v. Hodges ruling on June 26.

We must address trans rights (including healthcare and employment), LGBTQ youth homelessness, and a huge variety of other topics that directly pertain to LGBTQ safety and health.

11. People Are Understanding That LGBTQ Rights Are Intersectional

Race, class, ability, and many more issues all intersect with gender and sexuality. That's why feminism must be intersectional to be effective — and why feminism helps everyone.

To many LGBTQ people, these words are no longer offensive or problematic. Reclaiming words previously used as slurs can be a powerful way to take control of your own narrative.

13. Misandry Is Not Why Women Are Gay

Sexuality and misandry are unrelated. Hatred of men doesn't drive female sexuality, nor does it drive feminism.

They don't have to be short-haired and masculine-presenting, though they can be. They can have long hair, they can be blonde, and they can be ultra-feminine — or they can be something else entirely. In 2016, we understand that aesthetic and identity can't be boxed up.

In many cases, dating apps have made dating while queer much easier and safer for a variety of reasons, ranging from accessibility to the community to helping people who don't want to out themselves in public stay protected.

17. You Have A Special Place In Your Heart For The Rainbow Puke Snapchat Filter

Every day is Pride Day!