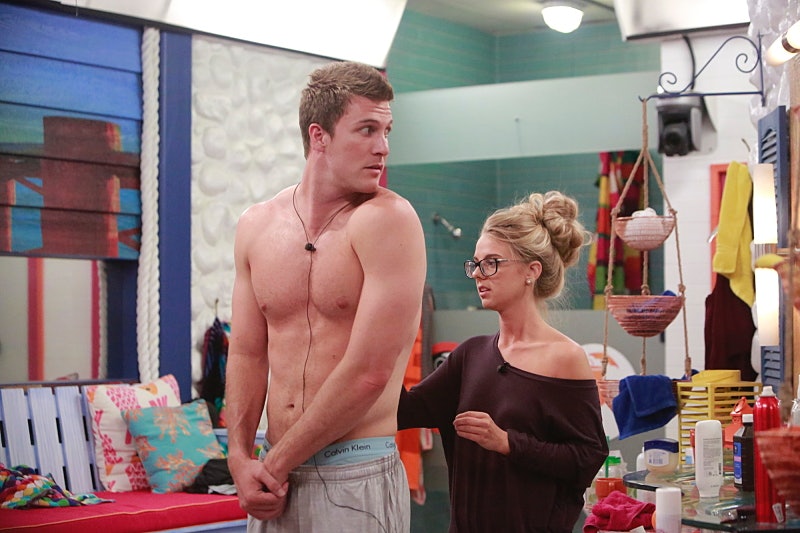 Ah, summer romance — filled with trips to the beach, breezy evenings outdoors, and hillside picnics. Summer romance takes a much different shape in the Big Brother house, where people are just happy to get some alone time and eat anything other than slop. The less-than-ideal circumstances of the Big Brother house hasn't stopped Corey and Nicole from getting close. Two pillars of the powerful 8-pack alliance, Corey and Nicole's showmance has made them a powerful force in the house, but is this showmance built to last? Corey is a much different personality than Nicole's BB16 showmance with the spontaneous Hayden. Is Nicole even Corey's type?

Judging by Corey's social media, yes. His pictures on Instagram mostly feature him and fellow men exercising and relaxing, but also show pictures of someone who appears to be Corey's last long-term girlfriend. His ex has a very girl-next door and blonde hair — just like Nicole. While Nicole and Corey's ex aren't nearly as similar looking as Nicole and her doppelganger Michelle, they are similar enough to say that, if Corey does have a type, then Nicole is certainly that type. For further evidence, here's a deeper look at Corey's dating history.

His (possible) ex appears a lot in picture dating back a few years prior to his Big Brother appearance, but there's no denying there's a similarity between her and Nicole. They both have blonde hair, Corey is significantly taller than both of them, and they both have a very friendly appearance. Corey hasn't talked much about his past relationships in the house, despite being too open about his past sometimes, but judging by his Instagram feed, the question is less of "Is Nicole Corey's type?" and more akin to "Is Corey Nicole's Type?"

Nicole clearly shares some similarities with Corey's ex, but there's not a lot that Corey has in common with BB16's Hayden. Then again, it's impossible to determine Corey's ex's personality from just a series of pictures. There's a chance that his ex is nothing like the quiet, sarcastic, and sometimes awkward presence that Nicole is. Corey's pictures with his ex seem to have ended a little less than two years ago which means he has had plenty of time to get over his ex, which isn't the same boat that Nicole is in, whose breakup with Hayden seems to have been fairly recent.

What is undeniable, however, is that Corey and Nicole's chemistry in the house is growing every day as alliance members and as a possible showmance.

No one can know what Big Brother has in store for this couple, and what obstacles will get placed in the way of their budding showmance. That is, if a showmance even truly spawns. While pairs like the somewhat surprising Natalie and James and the unsurprising Zakiyah and Paulie have been more open about their relationships, Nicole and Corey still seem a tad tepid around each other. They still have the rest of the summer to heart up, though, assuming these two can manage to stay in the house. Nicole seems to fit right in with what Corey is looking for in a girl, but will either of them risk a showmance throwing off their game? Only time will tell.