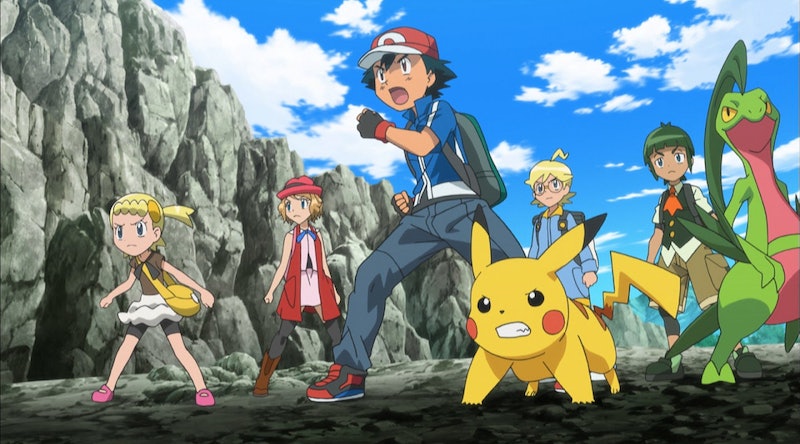 Can’t get enough “Pokemon Go?” Good news: If you’re in the mood for some literal Netflix and chill (by which I mean, actually watching Netflix and chilling out), good news: There are plenty of Netflix picks for people who love “Pokemon Go.” Here are 10 of them, because the possibilities really are endless, and you’ve got to start somewhere, right?

Regretfully, a huge number of movies and TV shows I really wish I could include on this list currently aren’t available to stream on Netflix: The Goonies, Jumanji, National Treasure, Existenz, The Game, and so very many more. But! Take heart; these films have all been included in Netflix’s streamable selections in the past, so it’s always possible — likely, even — that they’ll return sometime in the future. So keep a lookout, is what I’m saying.

I also tried to steer clear of some of the more obvious “If you like Pokemon, you’ll like this other anime” options; odds are that most of you are already familiar with — or at least aware of — Yu-Gi-Oh!, Digimon, Beyblade, and the like. For the record, those picks are also all available on Netflix, so if that’s your jam, go for it. But if you’re looking for some ideas that might be less overtly related to “Pokemon Go,” although still thematically relevant, check out the 10 movies, documentaries, and television shows below. Have fun catching — er, watching — them all.

Like the Pokemon franchise, Persona began life as a video game series and later got the anime treatment. While the gameplay isn’t necessarily the same (although they are both RPGs), the world of Persona strikes me as sort of “Pokemon Go”-like in that it layers one reality over another — not unlike the augmented reality aspect of “Pokemon Go.” If that’s the part of the whole thing that appeals to you, you’ll probably dig the universe in which the Persona series takes place.

One thing to note: The Persona 3 movies are actually a trilogy… but not all of them are available on Netflix. In fact, Midsummer Knight’s Dream is the only one that’s streamable—even though it’s the second film in the series. I’m unclear on why the first and third films are absent, but you might want to try tracking them down elsewhere to get the full experience. I also recommend checking out the Persona 4 television series.

Do you love the idea of finding weird stuff out in the wild — and sometimes not even being able to identify it until it’s right on top of you? If so, it’s a shame that Warehouse 13 doesn’t exist in real life; it’d be the perfect place of employment for you. Not unlike finding Pokemon, hunting down missing supernatural artifacts can sometimes be a struggle for Secret Service agents Myka Bering and Pete Lattimer… but it’s usually fun. In a dangerous kind of way. Bonus: If you were a fan of Eureka, you’ll see a few familiar faces in Warehouse 13 from time to time.

“Pokemon Go” involves hunting down mysterious creatures that not everyone can see (e.g. you can only see them through your phone if you have the game installed) and capturing them. Mushi-shi is about a person who hunts down mysterious creatures that not everyone can see and… well, doesn’t exactly catch them, but stops them from causing problems for those who can't see them. While it’s true that the creatures in Mushi-shi are supernatural, while Pokemon are intended to be more like actual wild animals, there are certain similarities between this manga-turned-anime and the gameplay of “Pokemon Go.”

I’ll be honest: I actually don’t like Video Game High School all that much. I think, though, it’s because I have trouble watching people suffer through extreme social awkwardness; as someone who is also often socially awkward myself, it just makes me uncomfortable (so basically, this is an “it’s not you, it’s me” kind of situation).

The web series, which began on YouTube, has an entertaining premise, though: It takes place in the relatively near future, where video games are the most popular competitive sport in the world — so much so that there’s an elite school that exists solely to train the greatest players around. Students aren’t exactly catching ‘em all, but they are trying to become the very best. Plus, there’s something vaguely augmented reality-esque about the sequences that take place in-game; rather than seeing video game characters in the real world, as in “Pokemon Go,” we see real people in a video game world.

6. Mysteries at the Museum Collection

Mysteries at the Museum is kind of like Warehouse 13 in real life: It examines the fascinating (and often really weird) histories of objects and events that can be found in museum all over the world — allegedly haunted dolls (among them Robert and Annabelle), Edison’s electric pen, and so on. If the collecting aspect of Pokemon is what draws you to it, this Travel Channel documentary show should hit the same buttons.

I find this one particularly interesting, given the current rise in popularity of augmented reality and virtual reality. Here’s the premise: A virtual reality massively multiplayer online role-playing game (a VR version of an MMORPG — think something like World of Warcraft, Starcraft, or Diablo crossed with an Oculus Rift or an HTC Vive) launches in the near future (2022). It’s called Sword Art Online, and it’s an instant hit. There’s just one problem: One day, everyone who logs onto the game suddenly discovers that they can’t log out — and what’s more, if their characters die in the game, the players die in real life.

This, of course, isn’t the first fictional work to make use of this framework (hi there, The Matrix), nor will it be the last; however, it’s still worth a watch, particularly if you’ve been spending a lot of time with “Pokemon Go” lately. I don’t think your Pokemon will ever try to attack you in real life… but it’s an interesting “what if?”

Curious about the gaming industry at large? Check out this documentary, which was crowdfunded in 2012 and 2013 and released in 2014. Admittedly reviews are mixed; however, as IGN put it, “Despite some organizational issues, Video Games: The Movie is an informative and entertaining look at the birth of the medium we know and love. It can bog itself down with information, but the interviews, classic footage, and smart coverage of relevant topics can appeal to any gamer, young or old.”

Bonus: If you’re less interested in the mainstream industry and more curious about what happens in the independent one, check out Indie Game: The Movie instead.

Hunter X Hunter is actually probably more similar to One Piece than Pokemon, but like a few of the other movies and TV shows I’ve included on this list, the treasure hunting aspect of it still feels sort of Pokemon-like to me. Both hunting for treasure and hunting for Pokemon are adventuring activities that take their protagonists on incredible journeys, whether it’s to become the very best or track down unusual things. And besides, Hunters in Hunter X Hunter don’t just hunt treasure; they can also go after, say, rare or unidentified animal species, so… you do the math.

OK, I’m cheating a little bit here — The Institute doesn’t actually appear to be on Netflix right now (the title page exists, but the film itself isn’t watchable on it). It was on Netflix a little while ago, though, and it’s available to stream via Amazon Prime, so consider this one a bonus.