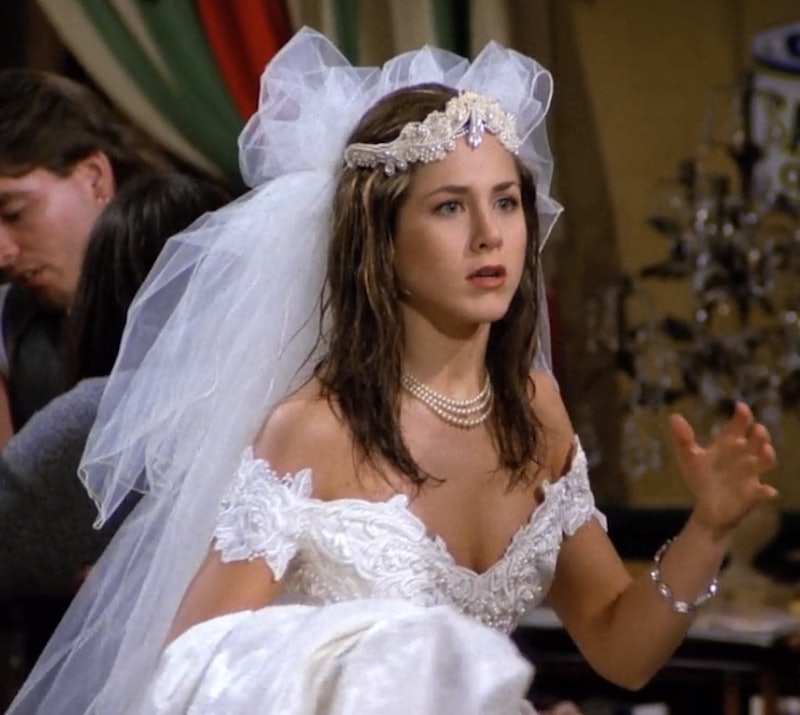 There were plenty of people we idolized growing up, but there's only one pop culture princess who remains ever-present in my heart: Rachel from Friends. There was a lot to love about her, from the classic Rachel Green fashion moments we were obsessed with, to the on-again, off-again, rather realistic relationship with Ross. And who could forget the "Rachel" haircut?

IMO, Ms. Green's phenomenal style helped define the way an entire generation of women dress today. Plus, her journey from spoiled daddy's girl, to whiny waitress, to retail superstar, to badass mama was awesome to watch.

That babe could pull off anything, too. Ever heard the phrase, "She could make a trash bag look good?" Well, Rachel was one of those terribly annoying people. However, she didn't always get it right. There were some occasions during which she actually got things so hideously wrong that you might have questioned her sartorial status. Take, for instance, the blue, leopard print peplum top she sported in a flashback scene, or the time she wore a white top with a red cross on it and looked like she worked for the Red Cross when she actually didn't. Very awkward.

If you were anything like me, though, you may have found yourself secretly loving the majority of her worst outfits. So, for better or worse, here are some defining Rachel Green fashion moments you were likely obsessed with.

Rachel wore a classic checkered shirt when she stuck up for herself at the beginning of the series, proving that she could be a tough cookie when the situation called for it.

There has never been — nor will there ever be — a gal who could rock a denim shirt quite like Rachel.

Is it a mini skirt? Is it a maxi skirt? Nope. It's both at the same time!

A long-sleeved top and a spaghetti strap dress with buttons down the front? Who would've thought that such a combo could ever work?

Rachel proved she wasn't always a girly girl when she got sporty in this Thanksgiving ensemble.

And the award for the best-dressed waitress at Central Perk goes to Ms. Green.

Rachel showed us all that she still had team spirit when she sported this cheerleading uniform.

It just goes to show that you don't have to wear a tiny bikini to be a total beach babe (unless you want to, of course).

Here Rachel wore a pair of PJ shorts, an oversized sweater, and what appeared to be men's socks — and she still looked gorgeous.

This outfit exemplified the notion that you don't always need to wear red, white, and blue to be patriotic.

Blair Waldorf would have killed for this gorgeously preppy ensemble.

12. The Dress Over Pants

Rachel Green is probably the reason we all wore dresses over pants in the '90s.

Rachel and Phoebe looked absolutely stunning in their bridesmaid dresses at Monica's wedding.

If Brigitte Bardot had been a country Western singer, I imagine this is what she would've worn in her youth.

Flaunting red again, Rachel positively sizzled in this scarlet dress that was worthy of an old Hollywood screen siren.

Compared to the outdated puffball Rachel wore in her first ever appearance on Friends, you likely preferred this contemporary wedding dress that she rocked around the house with her BFFs.

Somehow Rachel managed to make this custard-colored strapless dress with a slit on the side look phenomenal.

Ms. Green looked gorgeous in her sheer frock as she tried Joshua on for size.

Struggling to remain composed, Rachel still looked ravishing as she got caught in her lingerie by Joshua's parents.

I'm totally torn between whose bridesmaid dress looked better on her: Monica's or Phoebe's. It's a tough call, guys.

I have no idea what she was trying to achieve by wearing a tie around her bare neck, but you know what? It kind of worked.

This is basically what most fashion-loving women wish they could wear to work. Every. Single. Day.

Everything about this outfit makes me want to pull the OK hand sign emoji forever, in homage to Rachel's flawless style.

This lace-up top is so early '00s it actually hurts. In a really good way.

I could go on forever in order to discuss everything Rachel ever wore, because she sure knew how to dress. Although the series has ended, you can always re-watch your favorite Friends episodes again in case you need a Rachel Green fashion refresher. Even though she reigned in the '90s and '00s, Rachel's innate style will rule for all time.